OU visits TCU on Saturday in what will be the Sooners most difficult road game this season. This post will use drive-based analysis to examine the four most recent games played between the Sooners and Horned Frogs to determine what type of game to expect this weekend.

Share All sharing options for: Examining Oklahoma's vulnerability against TCU

Oklahoma's conference schedule provides the Sooners with a clear path to the playoff with games in Norman against Kansas State (10.18.14), Baylor (11.18.14), and Oklahoma State (12.6.14). UT's transition under Charlie Strong and the loss of David Ash will make it next to impossible for the Longhorns to win the Red River Rivalry. (Excuse me, it's apparently now AT&T's Red River Showdown.) After winning in Morgantown, Oklahoma's most dangerous remaining road opponent is clearly TCU.

The Horned Frogs won two games comfortably against a mediocre Minnesota team and a stunningly anemic SMU squad. In those games, TCU averaged 3.71 points per ten drive and allowed no points on 14 statistically significant defensive drives. Only two of those defensive drives ended inside the Horned Frogs' 40 yard-line.

Oklahoma has been arguably the most impressive team in college football thus far. Some readers may think that it may be foolish to presume that TCU can defeat the Big 12's most impressive team with their struggles in recent seasons. Recent history suggests Oklahoma will be in for a fight on Saturday. Oklahoma has outscored TCU by an average of 5.7 points per ten drives in their four games since 2005. Here were the outcomes for each of those four games:

TCU stunned Oklahoma in 2005 when they walked out of Norman with a win over Adrian Peterson and the Sooners. It must be pointed out that this was OU's first game in the post-Jason White era, and Peterson injured his ankle.

The graphs below chart how OU and TCU have fared against one another over the past decade. Here is an overview of these charts measure:

Please click on the charts below to enlarge each image: 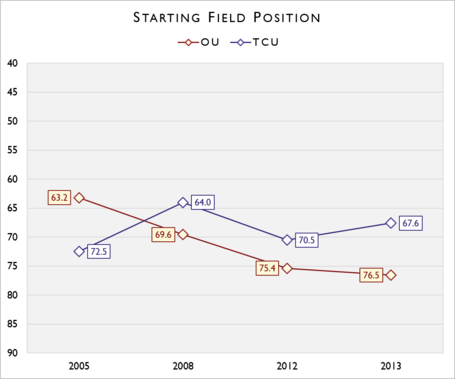 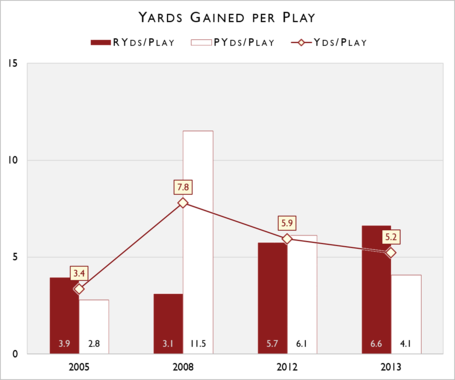 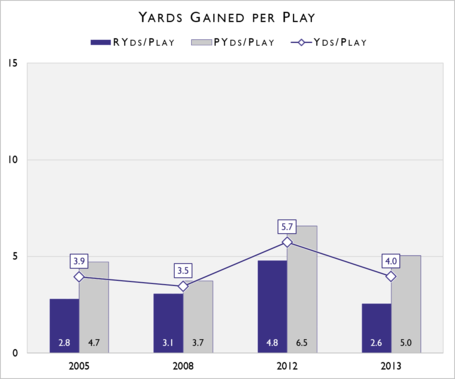 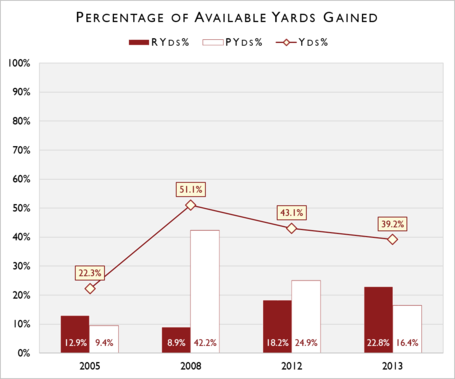 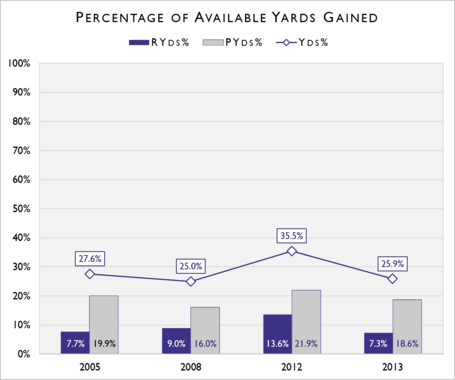 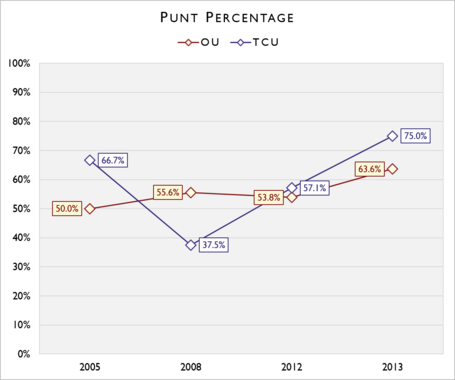 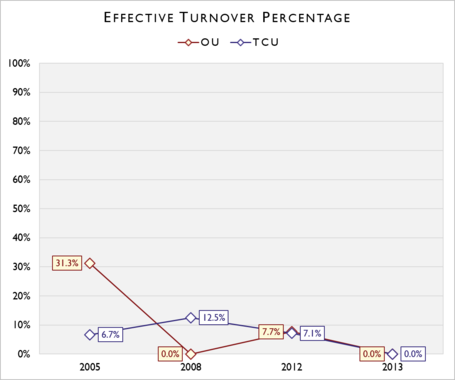 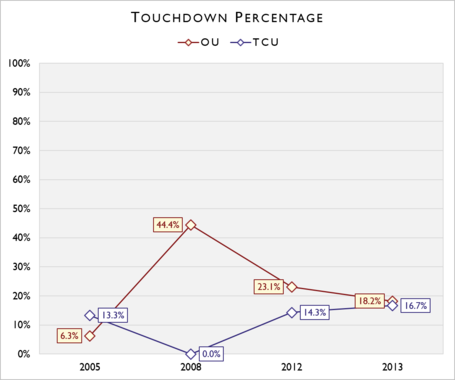 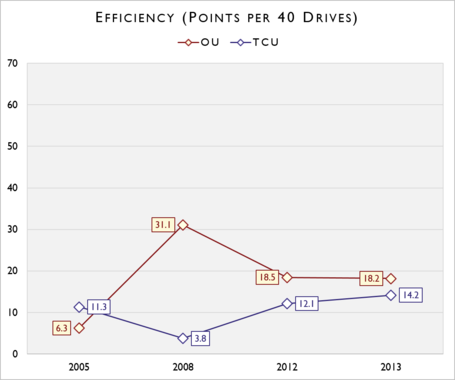 Oklahoma should be favored to win this game because the Sooners are more of a known quantity. The line on this game favors Oklahoma by 5 to 5.5 points, and that seems about right. Based on the quality of these teams's defenses and their past four games, the current over/under at 56.5 points looks way too high. With that being said, this prediction will likely look stupid by Saturday evening.

Here are a few other notes:

I wrote a few fan posts previously that included interactive Tableau data visualizations. The data in those posts have been updated. Click on the links below to access them:

Speaking of Kansas, I feel compelled to write about my alma mater's incompetent football program. Kansas is the smallest state with multiple BCS programs, and Bill Snyder owns Kansas. Kansas also cannot attract better players than Nebraska, Oklahoma, Missouri, and Oklahoma State. I would argue the biggest problem for this program will be establishing its offensive identity. Here's what I mean by that:

Consequently, count me among the Jayhawk faithful advocating for KU to hire Bob Stitt from the Colorado School of Mines. Bill C. advocates this strategy along with the guys at Rock Chalk Talk. KU needs an offensive coach with a history of building winners out of losers. The plate tectonics of conference realignment have not moved in a couple years, but there will inevitably be another expansion-induced earthquake. If the Jayhawks want to be on the right side of the cut line, they need to find a coach who can mold their program into something desirable.

That will be the last time I post about Kansas this season because the firing of Charlie Weis was the only interesting thing that will happen in Lawrence this season.

I plan to normally post on Tuesdays, but my lifelong allegiance to the Chiefs and Royals interfered with my ability to post earlier than Wednesday. For those interested in more drive-based analysis, please visit FBSDriveStats.com.