POP plays and the pro-style offense

The emergence of the "play-option pass" has breathed new life into the pro-style schools of offense.

Share All sharing options for: POP plays and the pro-style offense

When you think of the modern option game, with the introduction of screen or quick game reads for the QB, you think of spread offenses. You think of Air Raid teams in the Mike Leach tree, or spread option teams of the Gus Malzahn or Urban Meyer variety. Rarely are these new concepts associated with coaches like Lane Kiffin or teams that play pro-style offensive football. Yet these schemes are grabbing a major foothold within those systems.

Many major programs, like Oklahoma and Alabama, are finding that there's no reason to leave POP plays and the powerful constraint they put on a defense defending the run to these spread-happy teams. If you're a team that loves to pound the football why not incorporate some POP designs of your own to allow your QB to punish opponents?

As it turns out, the POP play has proven to be football's greatest gift to offensive coaches who prefer the pro-style approach.

The convergence of tactical history

In reality, many pro-style schools of offense were already heavily influenced by option principles. When a coach like Bobby Petrino is teaching his quarterback all the post-snap reads and adjustments of a passing concept like "shallow cross" he's basically teaching an option play. Except the QB doesn't run the ball and all the post-snap decision making is taking place with receivers against coverage rather than ball carriers against run defenders.

West Coast teams initially replaced much of what running the football is intended to provide by introducing quick timing throws that allow an offense to move the chains and control possession.

This presented some problems when applied at the college level as such teams often struggled to build great running games because of the practice time needed to install and master ball-control passing tactics.

The Air Raid started out as an evolution on West Coast offensive tactics with the run game becoming more of an afterthought that coaches would turn to only if defenses totally stymied their passing attacks by disregarding any threat of a run. With a few formational tweaks like adding receivers, widening out OL, adding more screen passes, and overhauling practice and install the Air Raid coaches found they could run these pass concepts at a very high level in the college game.

However, eventually Air Raid coaches like Dana Holgorsen realized that to reach the final level, the system needed to be able to present the threat of a running to protect the OL from aggressive pass-rushers as well as to set up play-action and the kind of vertical passes that put points on the board.

Meanwhile, traditional power-running schools of offensive football have always looked to marry the run game with the passing game through play-action. The Air Coryell school of pro-style offense is all about moving the chains with the running game while using the vertical passing game to do the real damage when defenses cheat up to stop the run.

In the play-option pass, all these schools are seeing the marriage of pass and run in a way that's changing the game.

How the POP play streamlines the pro-style approach

For West Coast teams that love to use quick-hitting pass plays to move the chains, the POP play is a God-send for how it integrates what that team has to spend practice time on.

For every POP play, the receivers don't have to worry so much about blocking defensive backs (unless it's a screen) and the OL don't have to master a pass protection scheme. The receiver run their routes, the OL and RB run their blocking scheme, and the QB chooses which play is going to find success based on simple pre and post-snap reads.

When standard downs are dominated by these tactics the whole process is simplified for the offense while simultaneously becoming more challenging for the defense. It's now much easier for a team to have both a great running game as well as a quick passing game since packaged POP plays allow each to feed off the other.

For the Air Coryell teams, they are finding that a quick slant, fade, or even post route can be possible on a running play before the OL gets more than three yards downfield and violates a rule.

You can train a savvy defender to recognize the difference between a true running play and a play-action block, even when the offense is pulling a guard or the QB is faking a run.

But with the vertical POP plays, there is no read for the defense. It can be a run or a pass and the only way to know for sure is to wait and see whether the QB hands off or throws it past you. What's more, you can now run deep play-option passes off zone runs and not feel the need to pull a guard to suck in the defense. They should be sucked in regardless, because it's a real running play rather than a simulation.

These developments are also a big boon to the classic, statuesque QB who was otherwise starting to lose his place in the modern game. If you can read defenders and protect your running game with pass constraints just as easily as option QBs did with their legs there's not the same need for the QB to be a brilliant athlete.

It will never hurt an offense if the QB is a great athlete but with the POP play, pro-style teams can integrate option reads into their running game without having to compromise what they look for in a QB in order to ensure they have an athlete. This is no minor detail.

If the strong-armed, quick thinking, but slow-footed QB can be a weapon in a west coast-inspired spread or a vertical Air Coryell system that opens the door for a lot of great football players to do impressive things.

Read various commenters talk about the POP play and they'll inevitably say "it works best with a dual-threat QB" as they are generally thinking of the Auburn play against Alabama or a similar variety of POP play that involves the QB having the option to throw on the run.

Or perhaps they just think of how the POP play allows an athletic QB who's limited as a passer to have the opportunity to make easy reads and quick throws that can do serious damage.

Those points are all true, but the most devastating practitioner of a POP play may be a great passing QB throwing off runs from formations with big personnel.

This Bama play is flagged and called back for having too many men in the backfield, not due to having linemen downfield or any other violation of the play.

The timing on the throw is perfect and could be theoretically triggered on this play any time that Blake Sims felt that Amari Cooper had a good chance to get off the line of scrimmage and run past his defender...which is often.

Alabama is slowly integrating these types of plays, but it's no accident that Cooper has 655 receiving yards through four games this season. Kiffin is finding ways to get him isolated and alone against overmatched defenders and one of those ways is via the POP play.

Another example with Oklahoma and Sterling Shephard, again we see precision timing on a deep fade route:

The design of the play is to punish teams for outnumbering the run, except this way the coaches don't have to wait for to punish that move, they can punish it immediately with Knight attacking the corner to whichever side sees their safety drop down in the box. In this instance, West Virginia foolishly dropped the safety on Shephard's side (Z receiver): 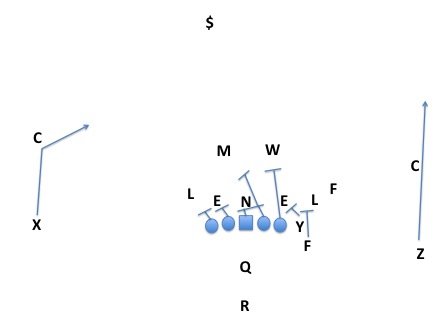 If the defense were to commit that deep safety to making sure that Shephard couldn't get behind the corner then they'd become very vulnerable to Durron Neal running the post route on the other side of the field. They already are vulnerable as you can see Neal gets inside of the corner, Knight simply hasn't looked that way very often yet.

Even when these teams aren't running POP plays, the mere threat of both their run game as well as their POP plays forces defense to either commit two players to these receivers at all times or risk surrendering stat lines like 10 receptions for 201 yards (Cooper vs Florida) or eight catches for 177 yards (Shephard vs Tulsa).

You're going to continue to see pro-style teams equip their quarterbacks with POP vertical reads instead of just normal play-action, which is going to have a multiplier effect on their run game, their QB's ability to wield the offense at the line of scrimmage (more up-tempo tactics?), and the stats of their big time outside receivers.

If you're a big play WR who wants to be featured on Sportscenter (which is virtually all of them), the pro-style offense just evened up with the spread for how it can give you easy opportunities to run deep routes against man coverage without the risk of getting popped at the end by a deep safety.

Pro-style teams have always been ones that simply take the ideas of the option, like post-snap reads and on the fly adjustments, and then added more precise and complex execution of those ideas to beat up foes. It's no surprise that they are doing the same with the spread-option's newest ideas.

It may just be that the result of all of offensive football's crazy developments is the creation of pro-style offenses that are easier and more effective for college teams than ever before. Just make sure you give credit where credit is due, guys. You didn't get this one from the pros.