Why Alabama's defense struggles with the up-tempo spread

As Alabama heads into a top ten match-up with Dr. Bo and the Ole Miss Rebels, with A&M and Auburn looming on the horizon, we dive into why these offenses trouble Saban so much.

Share All sharing options for: Why Alabama's defense struggles with the up-tempo spread

The hurry-up, no-huddle (HUNH) spread offense is slowly starting to take over the SEC. In 2012 Missouri and A&M introduced the conference to the possibilities of modern offensive football and Johnny Manziel won the Heisman, although the SEC title game featured a typical pro-style slugfest between Georgia and Alabama.

Just one year later the conference title game saw Auburn and Missouri combined for 1211 yards of total offense. Alabama was forced to yield their annual spot in the national championship game to their in-state rivals and offseason debates over the "health-risks" of uptempo offense begun as coaches like Saban and Bielema looked to counter the trend in their conference.

Of the 14 teams now in the SEC, five now run some variety of up-tempo spread offense and four are in the top 15.

Given this climate, and the fact that Alabama must play Ole Miss, Mississippi St, Texas A&M, and Auburn on a regular basis, questions about the Crimson Tide and the spread offense are probably going to persist until they submit their main rivals with stifling defensive performances.

Is the HUNH spread offense the end of Alabama dominance over the SEC? Is Nick Saban's D helpless against these teams?

Possibly and definitely not.

Let's start by establishing one thing: Alabama is no more vulnerable than other teams to up-tempo tactics and less vulnerable than a good many. They held West Virginia to 1.2 yards per carry in their season opener and only 23 points overall and they shut out Ole Miss in 2013.

It'd be a misnomer to say that Alabama is helpless or extra vulnerable to HUNH offenses, what would be more accurate would be to say that they are not as dominant against these teams as they typically are against other foes.

Does Alabama have bad anti-spread schemes?

Again, definitely not. Alabama carries schemes in their defensive playbook akin to how TCU defends the spread or other defenses well known for their ability to handle these attacks.

Their favorite alignment against the spread is to play 4-2-5 nickel personnel, quarters coverage with press corners, and deep safeties. Like many quarters teams, they have a variety of checks and varieties and will move the nickel halfway between the OL and slot receiver like a space-backer: 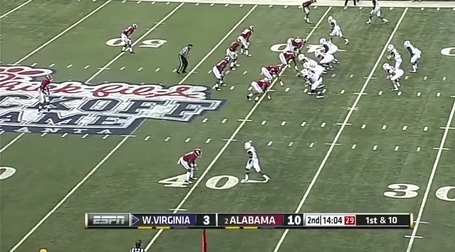 Or have him in an outside shade of the slot receiver so as to take away the bubble screen by alignment. In this case the safety behind him has to fill the alley hard and fast on runs, a task safeties like Haha Clinton-Dix and Landon Collins are very well up to. 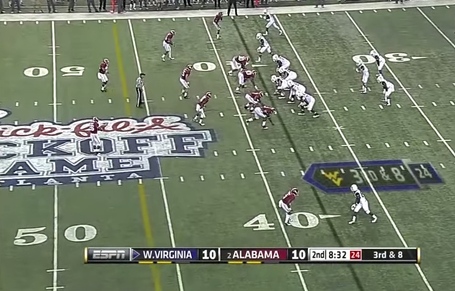 Of course, Nick Saban also invented a style of cover 3 pattern matching scheme that is very popular today for handling the spread and the Tide play man-1 blitzes that are good for attacking spread-option concepts.

Overall, Alabama doesn't yield the easy passes that spread teams thrive on, they play the run tough from nickel and even dime alignments, and they have either invented or adapted all the "best practices" for stopping spread teams.

So what's the problem? Why can't Alabama stuff these teams?

Part of the problem for Alabama is the fact that they have too many good anti-spread schematic options. Saban wants to call the perfect scheme at all times. Whereas a team like Michigan St will look to teach their players how to make small adjustments on the field to line up against different calls, Saban will call entirely different defenses for different occasions and opposing formations.

It's hard to get exacting calls in like that against an up-tempo team, which is why many teams prefer to play simpler, base defense tactics on the early downs and then bringing the thunder situationally.

Miss calls and you give up easy yardage, even if Alabama's safety tackling and team pursuit is often still good enough to prevent a score.

Another issue here is execution. Even at Alabama, where Saban is a perfectionist and the team plays to an incredible standard, it's hard to be better at executing all their different varieties of defense than these spread offensive teams are at executing their own tactics.

Part of the nature of the spread offense is that the spacing affords obvious countermeasures to defensive responses. They are aligning wide to stop perimeter plays? Hammer them up the gut. They are dropping a safety down? Throw over the top. The self-contained constraints of spread tactics afford a high degree of simplicity and an execution-based approach.

Saban's preference is to stay up all night in order to build exacting game plans that bring out every weakness his opponent has and then drill his players to execute his vision. He wants to control things from the sideline as closely as possible in a game that's trending more and more towards basketball or soccer-style tactics where the players have more initiative on the field.

Alabama's style on defense is designed to create a wall at or near the line of scrimmage that is nearly impossible to break through. They don't look to get a ton of tackles for loss and they don't bring a ton of pressure save for on blitzes or passing downs.

As a part of that strategy, Nick Saban wants big, wide bodies all over the field. They play big nose tackles and thick powerful linemen in the middle and they've even gotten a lot of mileage out of playing big cornerbacks like Dre Kirkpatrick. They've gradually been moving towards playing smaller DL and rotating bodies so that their big war daddies don't get cooked in the southern sun playing and run out of juice.

Where this has been tricky for Alabama is at linebacker and safety. Of the five inside linebackers in the current two-deep, they boast weights of 250, 240, 233, 254, and 238. CJ Mosley was an example of the ideal Alabama linebacker for handling the modern spread offense at 235 but the roster is loaded with players that more closely resemble Donta Hightower or Rolando McClain.

Back at safety is another issue for Alabama, as more and more they will face teams that send slot receivers up the field on option routes and Saban's 220 pound safeties will be asked to turn and run with them. That's a hard task, at some point a defense has to start putting more quick players out on the field.

Alabama has started trending in this direction but they've been stockpiling the roster for years with big bodies designed to stuff LSU, not run around with Sumlin's boys from Texas.

In 2013 Alabama's only had one player manage to get more than three sacks (DT A'Shawn Robinson, 5.5) and averaged 1.7 sacks while in 2014 they have managed to increase that average to 1.75 sacks per game.

For comparison's sake, the pressure-oriented Oklahoma Sooners have 12 sacks thus far in 2014 for an average of three per game.

While Alabama's style is designed to make long drives difficult by playing read and react and swarming the ball with big, physical bodies that won't easily be pushed aside, a sure fire way to kill up-tempo teams is with a few three and outs that force their defense to stay on the field for prolonged stretches against the Crimson Tide offense.

The easiest way to kill drives is to inflict negative plays and get off the field on third down. Without a pass-rush, that can become a dicier proposition.

The rule of thumb for a modern defense is that great defenses usually have great cornerbacks. There simply aren't many good ways to scheme a spread offense that doesn't involve being able to lockdown the sidelines without always needing safety help over the top.

Alabama has a variety of coverages that ask a lot from the cornerbacks, including Saban's preference for playing "bump and run" down the sidelines, taking away short routes, and the Crimson Tide's heavy doses of man blitzes.

When the starting corners were players like Kareem Jackson or Dre Kirkpatrick, this was less of an issue. However in 2013 Alabama didn't have anyone on the roster who could cover Mike Evans and against West Virginia the Tide struggled matching up with the Mountaineers' #2 outside receiver Kevin White.

West Virginia's quality at both outside WR spots is fairly unique but once again Alabama has vulnerabilities at cornerback that can come into play when an opponent puts multiple good receivers on the field, particularly on the outside.

Again, this is a problem for any style of defense, but it's a primary reason that Alabama isn't dominating spread offenses as you might expect.

There are a number of ways for Saban to continue to work all this out and put devastating defensive teams on the field that will handle their SEC West and potential playoff opponents.

One is simply to continue to recruit more speed to put on the field. Alabama currently has 18 linebackers and 19 defensive backs on the roster. Now, many of those linebackers are de-facto defensive ends in the 3-4 alignment but expect that ratio to begin to tilt more towards DBs. Alabama's 2014 recruiting class included five linebackers and three defensive backs. Thus far the 2015 recruiting class has about flipped that trend with five DBs in the class so far (potentially six if Shawn Burgess-Becker plays defense) and three LBs.

Another would be to find more DL like A'Shawn Robinson who can impact the game behind the line of scrimmage and get pressure on the QB. If the Tide got as much base pass-rush from their lofty recruiting classes as one would expect there wouldn't be many issues for this team in stopping spread opponents.

Perhaps the inevitable one is for Saban to alter his philosophy from scheming the perfect game plans to instead transferring more of his knowledge of how to adjust and attack into the minds of his players. NCAA practice rules make this a more difficult strategy but you have to wonder if Saban's ultimate adjustment will be to just heed the words of the hippy and "simplify, man!"

Unless a devastating pass rusher, a lockdown corner, or some simplified tactics emerge for this team they could be vulnerable at a key time in their journey to the playoffs or in the playoffs themselves.

The playoff era is going to shine a light on teams' weaknesses with the extra game and more difficult scheduling that teams adopt. If Alabama's defense doesn't dominate the playoff era because these weaknesses aren't shored up? Then eventually the overlap between the playoff era and the Saban era will cease to exist.