So you're starting a true freshman quarterback...

Is it ever a good time to invest in the boom-and-bust market of first-year starters?

Share All sharing options for: So you're starting a true freshman quarterback... 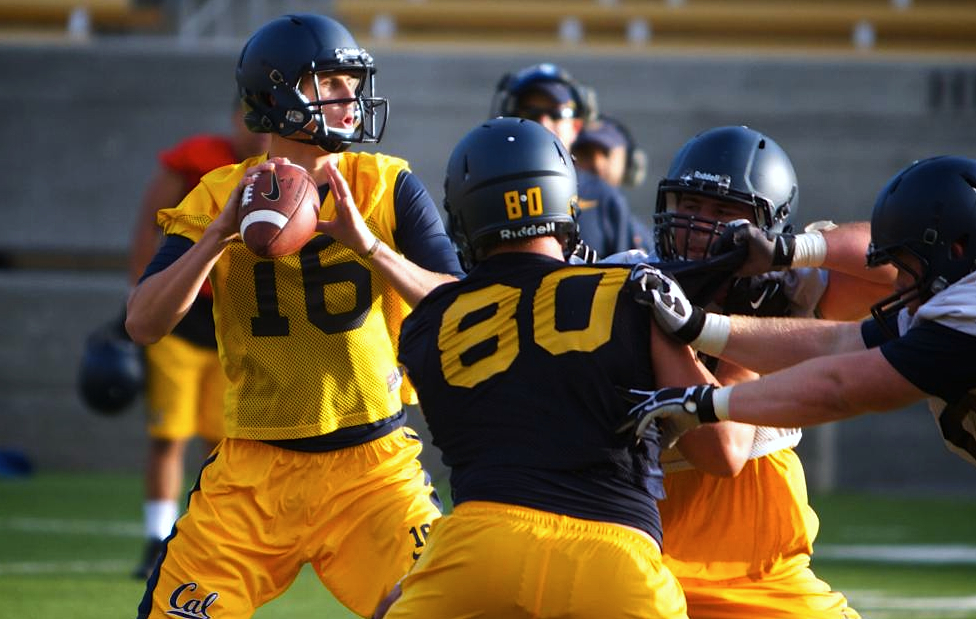 Jared Goff is officially the man at Cal, for now / CalBears.com

On Friday, California bit the bullet and formally named a true freshman, Jared Goff, as its new starting quarterback, the better to get him up to speed in first-year coach Sonny Dykes' "Air Raid" scheme ahead of the Aug. 31 opener against Northwestern. At 6-foot-4, 200 pounds, Goff still has some filling out to do, but he steps into the huddle with a prototype frame for a pocket passer, high marks from the recruiting sites and a spring practice under his belt as an early enrollee. Every standard indicator points to his long-term success, except one. As a true freshman starter, the odds are automatically against him.

It would help, of course, if he had been promoted in a stable system that surrounded him with veterans, instead of a rebuilding job populated overwhelmingly by other freshmen and sophomores. (The venerable Phil Steele ranks Cal 125th out of 126 for "combined experience," and depending on how the line shakes out it's possible the starting offense will not include a single upperclassman.) But stable situations tend not to be desperate enough to rely on new arrivals at the most important position, which is only one reason so many freshmen thrown into the fire early on seem to spend the rest of their careers playing catch-up – if they last that long. For most overachievers, eventually survival begins to look like a virtue in itself. 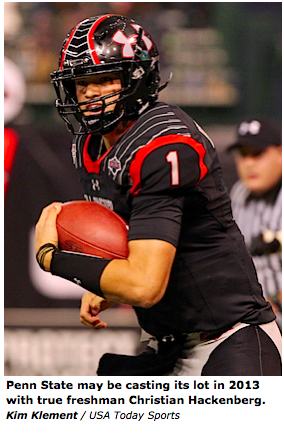 That may sound counterintuitive, given the standard narrative of steady, incremental improvement from one year to the next. At quarterback, the assumption is dubious. A few years back, in 2008, I put together a brief study of the extent to which freshman starters can be expected to improve as sophomores, and found that in terms of overall pass efficiency the vast majority didn't show much long-term progress at all. Initially, they tended to move toward the mean: Passers with below-average efficiency ratings as freshmen generally progressed toward the average in year two, while the few above-average passers generally regressed. From there, though, only the most blue-chip talents showed any propensity to take flight as upperclassmen. The rest stagnated.

The conclusion then was that for most quarterbacks – those who don't find themselves among the tiny sliver bound for All-America teams and NFL millions – the notion of a steady upward trajectory with experience is thwarted by a rapid leveling-off. Most of the time, beyond a small window for improvement at the very beginning, mediocrity is a harbinger of more mediocrity. Most guys are who they're going to be almost right from the beginning.

But that project lumped in redshirt freshmen with the guys coming directly from high school, and the subsequent years have dramatically widened the gap between those two categories. (Future quarterbacks can thank Andrew Luck, Kellen Moore, Taylor Martinez, Aaron Murray, Johnny Manziel, Brett Hundley and Marcus Mariota for wrecking the redshirt curve.) No first-year passer has made remotely that level of immediate impact. Among true freshman quarterbacks in the six major conferences over the last five years, in fact, only six have both a) Started a majority of their team's games, and b) Finished with a pass efficiency rating above 130, roughly in line with the national average:

This… well, this is a pretty good group, although with a few exceptions you would not have necessarily thought so watching them at the time. Pryor and Barkley were both unanimous five-star recruits who led their teams to at least one top-ten finish in the polls, and both currently reside on NFL rosters. (Pryor was part of three consecutive Big Ten titles and three BCS bowls, winning two; he left Columbus in turmoil, but with a 31–4 record as a starter. For his part, Barkley missed his shot at the BCS in 2011 due only to NCAA sanctions.) Miller was a borderline four/five-star recruit who set the Ohio State record for total offense en route to an undefeated season as a sophomore, and is arguably the frontrunner for the Heisman Trophy as a junior. Bridgewater, a much-hyped recruit in his own right, is by far the most coveted quarterback among pro scouts after lighting up Florida's blue-chip defense in the Sugar Bowl. RG3 is RG3. These are the only guys who generally succeeded as true freshmen, and that's only if you define success as being average.

There is that other guy. Although he still has three years of eligibility in front of him, Perry Hills was not a high-profile recruit, and in all likelihood is not going on to stardom at Maryland or a pro career beyond; after tearing his ACL last October, he's still battling for a backup role as a sophomore. I'm glad he made the cut for this group, if only to prove the deck was not intentionally stacked in favor of the headliners. But nobody mistook Hills in 2012 for a budding star, and it's no coincidence that he's the only member of the early achievers club who might be considered a "false positive" according to our very basic criteria: The fact is, even when they stumble out of the gate – and let it be recalled that Braxton Miller fell flat on his face in early 2011 – it does not take long for the guys who are going to become special quarterbacks to find their stride. (By the end of 2011, Miller was giving rivals heartburn even in defeat.) Whatever it is, it's obvious almost right away who has it.

Which, sure, is not exactly a groundbreaking revelation. What may be surprising, though, is just how rarely young quarterbacks who struggle to find their niche early ever do over time. Here are the other 21 players since 2008 who attempted at least 100 passes as true freshmen in a major conference: 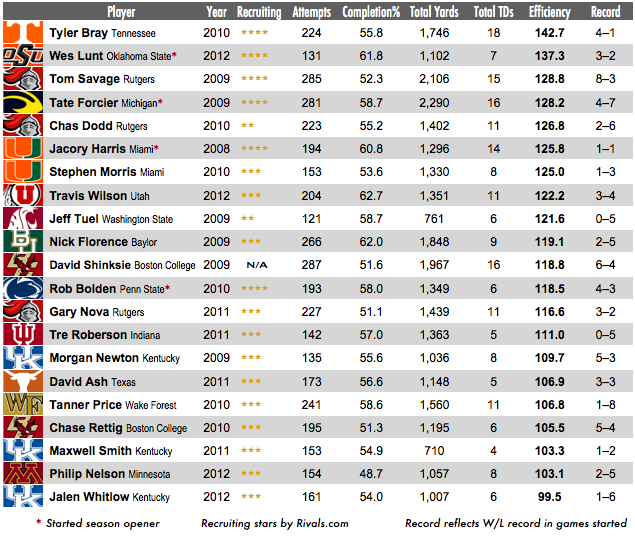 For a lot of those guys, the jury is still out. But to date, not one player in that group has been recognized on an all-conference team, played in a BCS bowl, heard his name called in the draft or caught on with an NFL team. In fact, many of the more touted players at the top of this list were never heard from again: Savage and Forcier lost their jobs as sophomores, transferred and turned into roaming vagabonds at multiple schools (Savage, now a fifth-year senior, has resurfaced as the new starter at Pitt), while Lunt decided to skip the prologue at Oklahoma State after falling behind in the spring. Bolden lost his job as a freshman, lost it again as a sophomore and transferred to LSU, where he remains planted firmly on the bench. Dodd is still at Rutgers, but lost his job to Gary Nova as a sophomore and didn't take a meaningful snap in 2012, even as Nova tied for the FBS "lead" with 17 interceptions. Shinskie and Newton both ended their careers as bystanders on dreadful teams.

Tyler Bray's number here is misleading, as he took the reins in 2010 just in time to carve up Tennessee's traditional November feast of Memphis, Vanderbilt, Kentucky and (in this case) Ole Miss in his first four starts, teams that finished a combined 13–36 that year. Given that his efficiency against SEC defenses actually fell over his last two seasons – not to mention the losing records and the whole "leaving early only to go undrafted" thing – the only real success story on this list is Nick Florence, and even that was delayed: Florence filled in as a true freshman after Robert Griffin was sideline by a torn ACL in 2009, and spent the next two seasons looking on as Griffin passed his way to the top of the sport. It wasn't until last year, as a senior, that Florence got his shot as the full-time starter, and responded by breaking RG3's school records for passing yards and total offense in a season.There are similarly high hopes in 2013 for Stephen Morris, who – despite breaking Miami's single-season passing record as a junior – has made little progress in terms of overall efficiency, and David Ash, who improved dramatically as a sophomore, and who Texas fans hope can make the same leap as a junior that Colt McCoy made in 2008.

The difference: In his turn as a redshirt freshman starter, in 2006, McCoy turned in a sky-high efficiency rating of 161.8, nearly 60 points higher than Ash's woeful introductory mark five years later. If Ash continues his upward trajectory this fall, he'll be the notable exception.

The good news for Cal is that Goff carries Bridgewater-esque ratings from the recruiting services, and may turn out to be one of those unusually gifted exceptions who buck the trend en route to the next level. We may look back in five years and say the same about Davis Webb, another early-enrolling true freshman who's in the thick of the race for the starting job at Texas Tech. Or Jeremy Johnson at Auburn. Or five-star Christian Hackenberg at Penn State. Just don't expect to wait that long to find out.