Morning Bell: Preseason polls, we love you, but we can never trust you

Share All sharing options for: Morning Bell: Preseason polls, we love you, but we can never trust you

• BUYER BEWARE. Once sacrosanct, the Associated Press poll has been slowly marginalized over the years by the BCS and the glut of competing polls on the web, and is set to lose whatever shreds of authority remain next year with the arrival of the CFB Playoff. But for a virtually meaningless, vestigial tail of an institution, it remains a lot of fun. The first poll of 2013 came over the weekend bearing no surprises – guess who picked up 58 of 60 first-place votes? – yet still generated the obligatory chatter and will set the template for the "official" rankings presented to the general public each week. As it was, as it ever shall be.

Anyway, if you weren't already so inclined you are hereby granted permission to ignore the AP poll. Over the last 15 years (i.e. the "BCS era"), the writers have been pretty good at spotting the frontrunners: Almost half of eventual BCS champions (7 of 15) began the season ranked No. 1 or No. 2, and all but three started in the top ten. Of the 120 teams in that span tabbed to finish in the top eight, 104 of them landed somewhere in the final poll, and well over half finished in the top ten. Beyond that, it's anybody's guess: 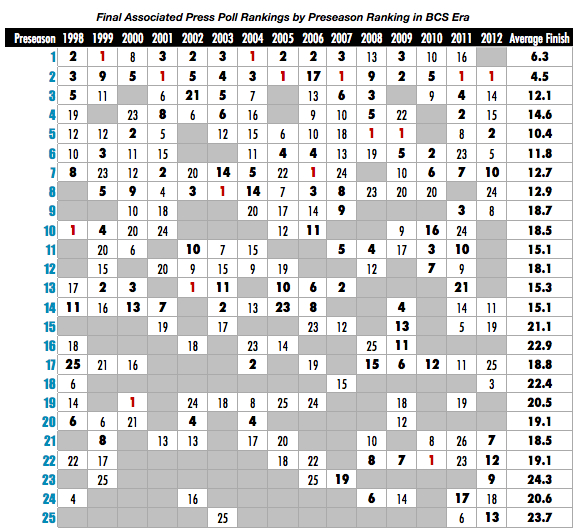 Beginning with No. 9, the bottom two-thirds of the first poll in any given year has been consistently worthless in forecasting the last poll, even more so than this chart indicates because the final average counts all unranked teams as if they'd finished ranked No. 26; of course they were all much further behind the curve. Outside of the top eight there is almost no correlation at all between where a team starts and where it finishes, and teams that start outside of the top 15 are more likely than not to finish outside of the poll altogether. (Woe unto the team that begins the season ranked 18th: This year, it's Nebraska.) And the writers' picks for No. 1 haven't been looking so great since 2008, either.

For now, the AP still carries more weight at the end of the year, when it can still conceivably buck the BCS consensus in favor of an old-school split championship, a la 2003. Until then, whatever.

• IT'S NOT EASY BEING GENO. In less flattering news for Alabama: Nick Saban "doesn't have the details" to give a definitive answer – or just doesn't want to – but Alabama may go into its Aug. 31 opener against Virginia Tech without one of its top cornerbacks, sophomore Geno Smith, who was arrested for drunk driving early Sunday morning. Smith (no relation to the other Geno Smith) played on a fairly regular basis last year as a true freshman, mostly in nickel packages, and gave every impression of living up to his recruiting hype as the heir to Dee Milliner, Dre Kirkpatrick, Kareem Jackson and Javier Arenas in the not-too-distant future. First, though, he has to crack the starting lineup against the Tide's other blue-chip corners – the current pecking order begins with seniors John Fulton and Deion Belue – a move that may now be further in the future than expected. Not that Virginia Tech will be able to tell the difference.

• MARSHALL PLAN. Although his former coach may beg to differ, Auburn's new starting quarterback is almost certainly not the next coming of Johnny Manziel or Cam Newton. But Nick Marshall is reminiscent of both in a couple of superficial respects: Like Newton, Marshall began his career at an SEC rival (Georgia), washed out after one season and was forced to spend his sophomore year lighting up the JUCO ranks before getting a second shot on the Plains. And like Manziel, he makes up for his less-than-ideal size (6-foot-1, 210 pounds) with the shiftiness of a cornerback; at Georgia, in fact, he was a cornerback. Marshall can't be the every-down workhorse or short-yardage cudgel that Newton was in 2010, but coach Gus Malzahn is already on the record praising Marshall's arm and calling him "one of the better athletes I've probably gotten a chance to coach at the quarterback position." We'll see. 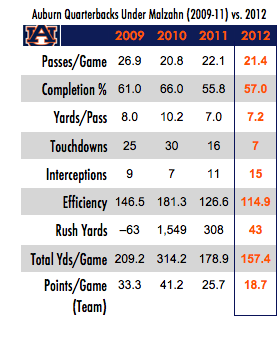 At any rate, Marshall is an automatic upgrade over incumbents Jonathan Wallace and Kiehl Frazier, who shared the starting job during last year's collapse and again in spring practice, but have now been relegated to backup QB and aspiring safety, respectively. (Frazier, a blue-chip recruit from Malzahn's old spread offense laboratory in Springdale, Ark., goes down as a bust for now, although he does seem optimistic about his new position and willing to give it an honest go before making a beeline for the transfer forms.) The Tigers finished dead last in the SEC in total offense and Offensive F/+, a feat that took some real doing in the same conference as Kentucky. They also allowed the most sacks in the league. Then everybody got fired.

Recall that, on either side of the Cam Newton Experience, Malzahn also oversaw attacks manned by Newton's platonic opposites – Chris Todd in 2009, Clint Moseley and Barrett Trotter in 2011 – and helped deliver eight wins in both years as offensive coordinator. None of those guys shared Marshall's potential upside, or his downside: In addition to accounting for 36 touchdowns last year at Garden City (Kansas) Community College, Marshall also committed 25 turnovers.

• GODSPEED. As far as the rest of the country was concerned, there was really only one Notre Dame linebacker in 2012, but much of the optimism surrounding the Irish coming into 2013 was fueled by the return of all three of Manti Te'o's running mates from a defense that finished second nationally in points allowed. As of Saturday, that number is down to two after the abrupt retirement of senior Danny Spond for health-related reasons. Spond started the last eleven games as a junior, including the BCS title game, but suffered from migraines during the season and decided to call it quits after his body went numb on a hit during Saturday's practice.

His absence on the outside could open a long-awaited window for junior Ishaq Williams, facing a make-or-break season if he has any chance of making good on his five-star projections as a recruit. If not, Domers are more than ready to renew the hype cycle with incoming freshman Jaylon Smith.

Quickly… As expected, senior Rob Henry is back as Purdue's starting quarterback. … Cal loses two projected starters at linebacker to injury and transfer, respectively. … Hyped freshmen Kelvin Taylor Is still not among Florida's top three tailbacks, although a walk-on is. … And gifted but enigmatic wide receiver Andre McDonald appears to be done for good in Minnesota.