Despite the media's slow acceptance of advanced stats, you still see plenty of references to traditional stats. Total offense/defense is probably the most commonly used misused stats in football. You can understand why...it's so easy to grasp. Yards / game. That's it.

As readers of this site know, however, it has serious limitations. One team's game does not equal another team's game: last season, Houston's defense averaged 85.9 plays per game. Alabama averaged 59.8, a difference of 26.1 plays. At the same time, allowing 378 yards/game (the NCAA average over the past four seasons) against Pac 12 offenses is vastly different from doing the same against Sun Belt offenses. Still, you won't see any correction for strength of schedule in a traditional total defense list.

I'm not breaking any news here -- you already know all of this. I thought it would be interesting, though, to look at the teams that have the biggest various between traditional stats and advanced stats. In this post, we'll look at total defense versus F/+ defensive rankings. 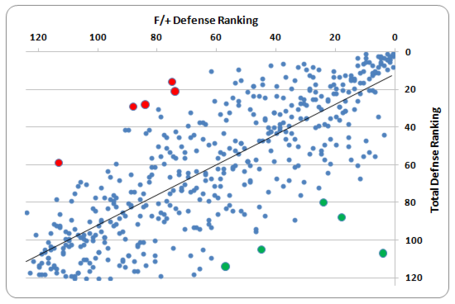 In the chart, I highlighted 10 extremes.

The green dots are all Big 12 teams. It's not hard to understand why...over the last four years, Big 12 offenses have been really good and the conference features lots of teams that use an up-tempo offense. This creates more plays, and thus more yards, for Big 12 defenses. Let's look at the top 5 green teams:

As an Oklahoma State fan, I'm not surprised to see the Cowboys so high on this list. Still, 3 out of the top 5 in the last four seasons is a little extreme. The 2011 defense allowed a ton of garbage time yards, which are included in total defense but not included in F/+. They also generated a crazy number of turnovers (44 turnovers in 13 games) and were countered by an up-tempo, quick-scoring offense that put them back on the field for roughly 84 plays/game that season. The NCAA average for the 2011 season was 69 plays/game.

When Oklahoma State was left out of the BCS title game in favor of Alabama, their weak defense was often brought up as a reason for voters to choose Bama. As someone who watched every Oklahoma State game that season, I would testify that Alabama's defense was unquestionably better than Oklahoma State's. Still, the Cowboys were victimized by traditional stats in a way -- I listened to several national commentators talk about Oklahoma State's terrible defense. By the way, according to F/+ the 2011 Bama defense is the best of any unit from 2005 to 2012. I don't have an issue with Bama playing for the title that season, by the way. Oklahoma State's loss to Iowa State was inexcusable for a national title contender.

Okay, I'm done with my therapy session. One more comment about Oklahoma State. In the last three seasons the Cowboys have had an excellent or decent defense according to F/+ (#18, #4, #24) but a terrible or mediocre defense according to total defense (#88, #107, #80). Defensive coordinator Bill Young oversaw all three of those units, and he was shown the door in the offseason. Another victim of traditional stats?

The other two teams on the green list were in the Big 12: A&M in 2009 and Texas Tech in 2010. Both were considered awful by traditional standards and average by F/+.

Now, let's look at the flip side of this coin. The top 5 red teams: good in total defense, bad in F/+:

There's a tie at the bottom, so let's look at Army. By traditional standards, they had a pretty solid defense - #29 in the country. By F/+, however they are well into the bottom half of defensive units in college football. Let's find out why.

Let's look at the top 25 in each category...maybe you'll see your team: