Your opening week predictions for all FBS teams.

It's finally here. The college football season kicks off in two weeks. And somewhere around 3PM on the 31st of August we'll all be pleading with the Great Referee in the Sky to make the non-conference slates go away. Ah yes, weeks 1-4. The 'not quite ready for primetime' time of the college football schedule.

Before I give my predictions for week 1, here's a review of my preseason expected win totals. Remember that these totals don't include conference championship games or predicted bowl games.

Edit:  I had a request for documentation of my methodology.  Lest anyone think I'm just making this all up as I go along, here's a basic description of how I arrived at these numbers.

And now my Week 1 predictions:

Edit #2:  Algorithm Adjustments to Incorporate a SOS element
I took a beating for leaving out a SOS component this morning.  I appreciate the input I got here, via Twitter, and over the phone today about incorporating a SOS adjustment into the model.
In response I built I've adjusted the algorithm to account for SOS.  I've never worked with SOS before, and what I found was that even small adjustments for SOS can make a HUGE difference in the p(win) calculations.  I think I found adjustment numbers that accurately reflect the previous year results.  I'll keep using this adjustment this season, and evaluate the differences at the end of the year.
Here's the updated expected wins for the FBS.  The standard deviation column can be interpreted as the relative degree of confidence in the output from the model.  Not surprisingly, the teams at the top and bottom of the expected wins column have the highest confidence (lowest standard deviation).  The following chart illustrates this relationship well. 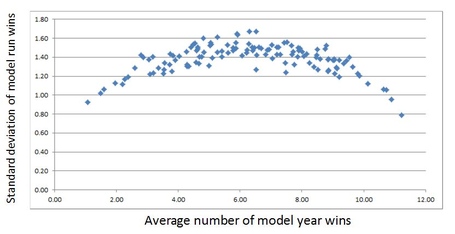