The last word on 13 pressing narratives for the 2013 season. Today: South Carolina's precocious pass rusher is the first defensive frontrunner for the Heisman Trophy in recent memory. How good does he have to be to actually win it?

Jadeveon Clowney is 20 years old. He's played in all of 25 games at South Carolina, coming of the bench in half of them. Already his résumé is beyond reproach. As a sophomore, he tied for second nationally last year in both sacks and tackles for loss, earned opposing coaches' vote as the SEC's Defensive Player of the Year and was honored as a unanimous All-American by every major outlet. Before that, he was the coaches' pick as the SEC Freshman of the Year. Before that, he was unanimously anointed by recruitniks as the No. 1 incoming player in America.

Knowing what we all know about the political realities of the sport's most hallowed hunk of bronze, you certainly couldn't peg him as a legitimate frontrunner for the Heisman Trophy, as ESPN's "Heisman Watch" panel did earlier this week by tabbing Clowney as the preseason favorite over a field composed of eight quarterbacks (including the runaway winner in 2012), four running backs and one wide receiver, USC's Marqise Lee, who doubles as a return man. No other defensive player was pegged to finish in the top five, as they never are.

To grasp how that's possible – how a junior defensive end can not only threaten the transcend the traditional offensive stranglehold on the award, but actually be expected to – the first thing to understand is that it has virtually nothing to do with numbers. Here is a man – still only barely a man – capable of such sudden, explosive force that it cannot be understood within the context of recreational violence.

Just as Johnny Manziel will be compared this fall to his over-the-top stat sheet as a redshirt freshman, that play set a bar for theatrical mayhem that still may exist only in folklore.

So, okay, let's talk numbers. Statistics and accolades are a reflection of the visceral, the best means we have to quantify and compare, and even in Clowney's case they will have to supply a baseline that allows the intangible hyperbole to take root. In terms of the "impact" stats for defensive linemen (sacks, tackles for loss), his 2012 production stacked up well against former Pitt end Hugh Green (second place in Heisman voting in 1980) and former Nebraska tackle Ndamukong Suh (fifth place in 2009), whom Clowney outpaced last year in both categories; against Clemson, he set the school sack record with five takedowns of Tiger quarterback Tajh Boyd in one night, breaking the career sack record in the process. 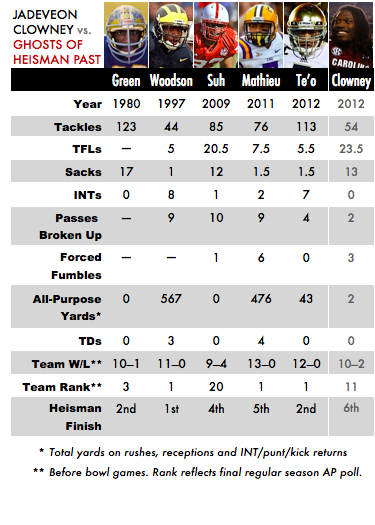 He also forced three fumbles in 2012 after forcing five as a true freshman, a habit that lends itself to the opportunity to score a touchdown, which neither Green nor Suh managed in their biggest years but proved crucial to the campaign of LSU's Tyrann Mathieu, who scored two defensive touchdowns en route to a fifth-place finish in 2011. (Mathieu scored twice more that year on punt returns; in 1997, Michigan's Charles Woodson scored twice as a wide receiver and on his immortal punt return against Ohio State, but did not score on defense.) Frighteningly, Clowney can stand to improve his conditioning and consistency – his own defensive coordinator has criticized him for not playing hard all the time, and Clowney has conceded to being "out of shape" last season – which should boost his raw tackle numbers and counter the impression that he tends to disappear between outbursts. In general, given the inevitability of double teams and game plans designed specifically to keep the ball as far away from Clowney as possible, anything vaguely approaching last year's stat line will be good enough to get him to New York.

But stats are no substitute for the visceral. In part, that means delivering a handful of "Wow!" plays for the highlight packages, a la the near-decapitation of poor Vincent Smith, and making his presence felt one way or another in the handful of South Carolina games (North Carolina, Georgia, Florida, Clemson, maybe Arkansas or Tennessee) likely to command national attention. In even larger part, though, it means the Gamecocks need to win those games.

Like all potentially transcendent players, Clowney is the face of the team, and his reputation will rise and fall largely on its collective success. How much attention would he be commanding this summer if South Carolina wasn't coming off back-to-back, top-10 finishes that stand as arguably the best seasons in school history? The ongoing ascendency of an historically obscure program is the essential context. Although Woodson could not have won the trophy in 1997 without his contributions as a wide receiver and return man, he also could not have won had he not played on a unit that led the nation in total defense en route to a national championship. In his breakthrough season, Suh was the anchor of a unit that led the nation in scoring defense and came within one second of winning the Big 12. Mathieu was the leading tackler on a team that ended the regular season ranked second nationally in both yards and points allowed and first in the polls. Te'o was the most the recognizable player on a defense that dragged a mediocre-at-best offense to the BCS title game.

Unlike Michigan, Nebraska, LSU or Notre Dame, South Carolina has claimed a single conference championship in its history (it won the ACC in 1969) and is only beginning its first taste of national relevance. Clowney is both a symbol of how far the Gamecocks have come and how good they can be in the future if they cash in on this window. The defense, the cornerstone of that success, is largely in flux: Seven of last year's top ten tacklers are on their way out, leaving Clowney as the veteran heart of an outfit that now expects to routinely compete among the SEC's upper crust. Where his individual ambitions are concerned, it more or less has to: The barriers that have fallen between the Heisman and a player like Clowney suggest just how important the supporting cast really is.