Final Takes: Another year, another platform for the Longhorn leap

The last word on 13 pressing narratives for the 2013 season. Today: Texas the talent, the experience and the opportunity to reclaim the top of the Big 12. If not now, when?

Share All sharing options for: Final Takes: Another year, another platform for the Longhorn leap

Previously in this series: Quantifying the Clowney Curve.
– – –

OK, stop me if you've heard this one before. Here's Texas, established power with bottomless resources, the best-paid coaching staff in college athletics, massively hyped recruiting classes, and finally, finally, after two years of growing pains and disappointment, a roster that looks like it's ready to bear fruit. Here is a team with all the pieces in place.

On offense, UT welcomes back last year's starting quarterback, the top three rushers, five of the top six receivers and all five regular starters on the line. Defensively, there's an abundance of returning starters, most of whom have a future at the next level. The roster as a whole has combined for more career starts than any other outfit in the FBS, and is packed with former blue-chip recruits who have already endured the learning curve as underclassmen.

The Longhorns have the talent, the experience and the opportunity in a conference with no obvious frontrunner. They've been here before. If not now, when?

If that spiel sounds familiar, it should: The prospective virtues of the 2013 edition could be lifted more or less verbatim from the more optimistic of the preseason forecasts in 2012, which also envisioned the upcoming season as a turning point from the two worst seasons of Mack Brown's tenure in 2010 and 2011. The maturing quarterback, the budding young playmakers on offense, the physically imposing defense, the absence of a dominant overlord at the top of the Big 12 – as of this time last summer, and for a month afterward, the answer was most definitely now.

Instead, the redemption tour was derailed and ultimately defined by injuries, inconsistency and a deflating sense that the hole was deeper than anyone had realized. The gap between perception and reality hit especially hard during another deflating, lopsided loss at the hands of Oklahoma, one that reaffirmed the Sooners' dominance in the series and the Longhorns' status as an also-ran idling in rebuilding mode. Texas never fully recovered. Ultimately, the only clear difference between the 2012 Horns and the disappointments of 2010–11 was the end of two-year losing streaks against Baylor and Oklahoma State. If not for a late, improbable rally to beat Oregon State in the Alamo Bowl, they would have finished outside of the final polls for the third year in a row.

But what was true last August is true again, only more so: With 22 players back who started at least five games in 2012 and a dozen more with some starting experience in their careers, the 2013 Longhorns have played more football together than any other team in the nation. It's entirely possible the starting lineup this fall will consist exclusively of juniors and seniors. And given that they play for Texas, the expectations that follow are bound to collide with the outer limits of optimism. For the second year in a row, UT is pegged by a consensus of the preseason magazines to finish second in the Big 12 (by a much narrower margin this time than in 2012) and to end the season ranked among the top ten nationally. On the latter front, the Longhorns are the most well-regarded team in the conference. 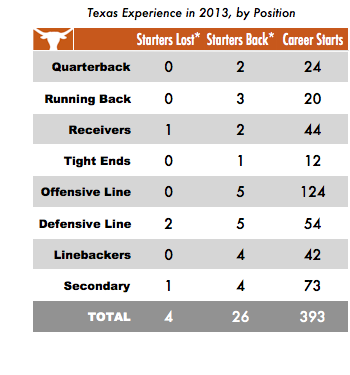 That assumption would be harder to dismiss if the 2012 outfit hadn't flashed its potential even while seeming to run in place. That was most obviously true at quarterback, the source of constant trauma and intrigue over the previous two seasons, where sophomore David Ash made the job his own with a blockbuster September. Ash spent most of the season ranked among the most efficient passers in the nation and punched his "clutch" card in come-from-behind wins over Oklahoma State in September and Oregon State in the bowl game. The offense as a whole improved its scoring average by more than a touchdown per game over 2011, and actually outperformed the 2009 attack that played in the BCS title game in terms of yards per game, yards per play, third-down percentage and giveaways.

But the high points only made the inconsistency that much more frustrating. The offense showed up early against Oklahoma State and West Virginia; the defense did not, running for cover in a pair of down-to-the-wire shootouts. By the time the defense pulled it together for late-season slugfests against TCU and Kansas State, the offense had gone into hibernation. Ash was occasionally brilliant and occasionally found himself benched for ineffectiveness. Three different tailbacks had their turn as the featured runner, delivered a big game or two apiece, and spent the rest of the season struggling for carries. The defense managed to lead the Big 12 in tackles for loss while also finishing dead last against the run. Twice, the mounting optimism of a four-game winning streak was dissolved by the reality of back-to-back losses.

While the lineup has hardly changed, the offense will look different in a couple of important ways. In the booth, play–calling duties will fall for the first time to former UT quarterback Major Applewhite, promoted to offensive coordinator last winter in the wake of Bryan Harsin's departure for the top job at Arkansas State. On the field, the Longhorns have embraced an up-tempo, no-huddle philosophy that prioritizes speed and rhythm over the multitude of personnel packages favored by Harsin. We'll see how long that sticks, if it ever does.

At any speed, though, what the offense is really searching for is a reliable playmaker who can serve as the backbone of a coherent identity. Since Mack Brown's arrival in 1998, Texas as its best has never been about innovation as much as adaptation. For a while, that meant an emphasis on downhill, between-the-tackles running to suit the talents of workhorses Ricky Williams and Cedric Benson; later, it meant installing a shotgun/zone-read scheme to accommodate Vince Young, and then a spread passing attack that hinged on the uncanny accuracy of Colt McCoy. Williams won the Heisman Trophy, Young and McCoy both finished as runners-up and Texas won more games in Brown's first 12 seasons than any other program. Since then, no one has emerged as a viable bellwether for more than a week or two at a time, and the offense has lurched from philosophy to philosophy in pursuit of a reliable answer.

Despite the presence of five-star thumpers Malcolm Brown and Johnathan Gray in the backfield, the face of the offense is clearly Ash, who improved his pass efficiency by more than 45 points from 2011 to 2012 and may be on the verge of making the same breakthrough as a junior that McCoy made in 2008. (As a sophomore in 2007, McCoy was scapegoated for throwing 18 interceptions en route to a (relatively) mediocre, 10–3 finish; a year later, Texas was one second away from a perfect season and McCoy made his first of two trips to New York.) Ash is no Heisman candidate, and unlike McCoy he can't function for entire games at a time without some semblance of run support from some combination of Brown, Gray and/or Joe Bergeron. But he does have a couple of proven weapons at wide receiver, and if he manages one-third of the improvement from sophomore to junior that he showed from freshman to sophomore, this is a front-running attack even by Big 12 standards.

The operative word in that scenario, of course, being if. A word that always works both ways. If Ash can't turn the corner with 18 career starts under his belt and fellow veterans surrounding him at every position, why is there any reason to believe he ever will? At age 61, if Mack Brown can't get Texas back to the BCS with the most veteran locker room of his career, there will be no shortage of critics ensuring his bosses are confronted with the same question. Brown's success over the past decade earned him more than enough capital to survive a slump and subsequent renovation. Now is the time for that investment to pay off, before he has to worry about whether he can afford another one.