Last year, I redesigned the S&P+ ratings to both incorporate more factors (primarily those related to the Five Factors) and snap more properly onto a bell curve.  The results were pretty good -- the opponent adjustments are more sound, win probability projections were outstanding, and S&P+'s performance against the spread was about as good as always (~52%). As I am a tinkerer, I've already got a couple more ideas to try, so I might be updating the updates soon. At some point, I should probably try to stop doing that.

One of the things I wasn't happy with when it came to this year's S&P+ ratings was that I ran out of time in the offseason and couldn't tease out special teams ratings as I wanted to. As it stands, factors like field position (which obviously draws from kicks and returns) and finishing drives (place-kicking) are incorporated into the offensive and defensive ratings, even though that isn't a perfect fit.

Well, this isn't a perfect fit either, but it's a start: Below you can find what I'll call a beta version of Special Teams S&P+ ratings. They don't actually fit into the overall formulas yet, and it will probably take quite a bit of tinkering to get to that point, but I finally found a moment to go down this road a bit.

Let's start with that question. We can get a pretty good feel for special teams by using the go-to measures -- punting and kicking averages (and maybe touchback rates), return averages, FG percentages, etc. And if you want to go further than that, you've already got Brian Fremeau's ratings to fall back on; I've referenced them frequently through the years.

I had a vision of my own that I wanted to pursue, however, and it revolves around the same success rate concept that make up such a large portion of my offensive and defensive ratings.

We determine good and bad kick or return teams based on just a handful of samples. For instance, the five worst teams in the country by opponent kick return average were Texas State, Arizona State, Georgia State, Hawaii, and Missouri. These five each allowed at least 26.5 yards per return, which is quite bad. But the five also covered an average of just 22.6 returns in 2015, fewer than two per game. The top three rushers in college football averaged more than 22.6 carries per game.

With such a small sample, just one or two big returns can drastically skew your averages. Hawaii, ASU, and Texas State each allowed a kick return touchdown, while eight other teams allowed two and Louisiana Tech allowed three.

Really, though, what happens after about 30 yards is pretty random, just as big plays are to some degree random on offense and defense. Your goal as a return unit is to get your man to about the 30 or 40, then hope he's able to find an angle that allows him to go much further; your goal as a kick coverage unit is to hem the guy in before he gets to that point.

So what happens if we eliminate onside kicks and judge a kickoff or return unit by simply how frequently returns were hemmed in at a certain baseline?

On average, kickoffs netted about 40-41 yards per kick in 2015. Since touchbacks net 40 yards, the median falls in the same range, too. So what if we simply deemed kickoffs that net 40 yards or more a success? And what if we deem returns that create net yards of 39 or fewer yards successes in the opposite direction?

The three teams in italics were also in the top 10 for kick return average, but the other seven were not.

Judging kicks in this rather simple way changes how we view kick coverage in general. A healthy 38% of kickoffs are touchbacks on average, and if you're really good at booting the ball through the end zone, you don't have to really worry about how good your coverage unit is -- you're producing good field position regardless, and that's the primary goal here.

Kent State and SJSU were among the bottom 10 in average return allowed. The other eight were not.

Meanwhile, Old Dominion allowed 'only' 19.8 yards per return, 37th in the country. But only 1.9% of the Monarchs' kickoffs were touchbacks. A 20-yard return gets you pretty far if you're fielding it at the 10.

But looking at net kickoff yardage (instead of just return yards) and focusing more on success rates than averages, we get a better view of the teams that were most consistent.

So what about returns? If we eliminate touchbacks and non-returns and simply deem a successful return as something that results in an unsuccessful kickoff, what do we get?

Five of 10 were also in the top 10 in return average. As you would probably assume, there's more continuity there.

Again, five of 10 were in the bottom 10 in return average.

Think for a moment, however, about the advantage or disadvantage this can generate. The worst return team (Florida) was getting out past the 25 on only three of 20 returns on average; the best (Tennessee) was doing so on 15 of 20. Even at only two to four returns per game, that can generate a healthy field position margin by itself.

Punting is a little bit trickier to measure since it doesn't take place from the same spot on the field every time (well, almost every time). The average punt netted about 37.3 yards in 2015, but depending on where you're punting from, that average shifts dramatically. 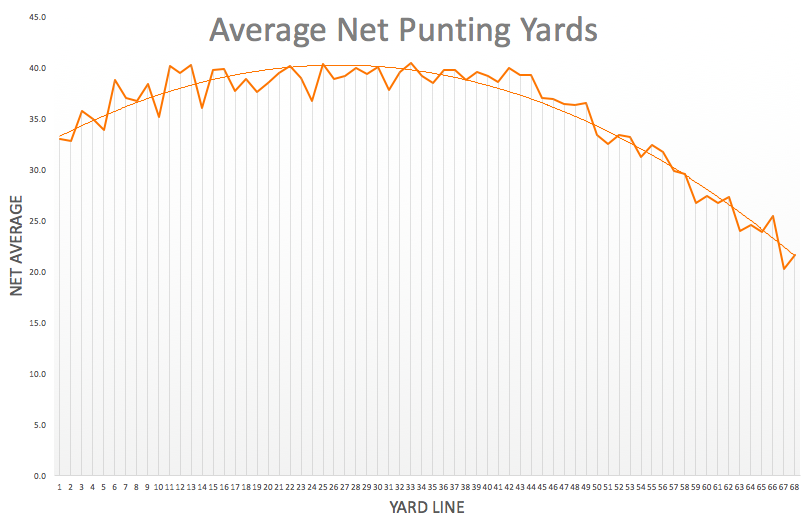 That's a pretty perfect polynomial right there. If you're punting with your feet in the end zone, you might be taking a shorter approach to make sure you get the kick off. If you're punting from the opponent's 40 -- and yes, it is okay to sometimes do that -- then setting the bar at 37.5 net yards is pretty tough (here's your reminder that touchbacks cut 20 yards from your net).

So for determining punt success rates, what if we just set the bar based on the trend line above? If you're punting from the 1, a successful punt nets more than 33.2 yards. If you're punting from your 35, it's 39.5 yards. From the opponent's 45, 31.5. This gives you a moving target and doesn't punish punters who end up taking more snaps from their end zone or from deeper in opponent territory.

So what does this produce?

Only two of these teams -- FSU and SJSU -- were also in the top 10 for punting average. Consider this Cason Beatty's Redemption, as FSU's much maligned punter had one hell of a fall. Meanwhile, everybody's favorite fat punter, Utah's Ray Guy Award winner Tom Hackett, ranked only 20th when it came to meeting this bar with frequency. He had a cannon for a right leg (48.0 yards per punt), but maybe the driver isn't always the best club to use.

So what about returns? Because punters sometimes try to avoid awesome return men, I was tempted to include punts out of bounds in the sample here, but for now, let's just do what we did with kickoffs: look at punt returns that result in unsuccessful punts.

And on the other end of the spectrum...

Again, the spread between consistently successful returns and consistently unsuccessful ones is pretty large, especially considering that punts are more frequent than kickoffs for most teams.

Since you don't get partial credit for field goals -- "well, that was pretty long, and he came pretty close, so it was a successful kick" -- we have to take a different approach for place-kicking, I think.

Luckily, there are direct point expectations based on a given distance. On average, for instance, college kickers made 83.9% of 28-yard field goals in 2015. Multiply that by the three points a field goal is worth, and you have an expected point value of 2.52. Give him a few kicks, keep track of the expected and actual point values, and boom. You've got a Net Point Value kind of FG metric. Divide it by the number of FGs he takes, and there you go.

Poor Wyoming kicker Tristan Bailey missed six of eight field goals in 2015. There's probably a reason he was only asked to attempt eight. (But hey, he only missed three PATs, so it could have been worse...)

So let's (finally) tie this all together.

Using the success rates discussed here for punts, kicks, punt returns, and kick returns, and using the net value method for field goals, we can begin to piece together what might eventually become a Special Teams S&P+ of sorts.

What you'll below are basically two stabs at that. You'll find that five sets of ratings, and you'll find a ST S&P+ and a Weighted ST S&P+. Since not every special teams category carries the same amount of weight -- there are usually more punts than kickoffs, and you don't have a return on every punt or kickoff -- this is an attempt to ascribe more importance to the more important pieces of special teams.

I started with the weights I referenced in this piece and started to tinker with them based on what made the ratings correlate more strongly with the overall S&P+ ratings (since that's where I'll be taking this, and since, again, pieces of special teams are already in the ratings).

The most interesting part to me here is how different my ratings are than Fremeau's http://www.footballoutsiders.com/stats/feist. Four of our top 10 teams are the same (Duke, Memphis, KSU, Stanford), but three of my top 10 are worse than 60th in Fremeau's ratings (Minnesota is 61st, Texas Tech i64th, Nevada is 73rd). As always, that probably means that a split-the-difference, F/+ type of measure will end up being the best for this, but I haven't finalized mine yet.

The saddest part, by the way? UCF went 0-12 with one of the best special teams unit in the country. That's how bad the actual offense and defense were.