What are the components that go into determining a team's field position in college football?

So here's where it gets tricky. Conceptually, the Five Factors I posted last week are pretty easy to understand. Where do you start your drives? How quickly and consistently can you create scoring opportunities? How good are you at converting opportunities into points? And how kind to you is fate when it comes to turnovers?

College football comes down to five basic things, four of which you can control.

Efficiency and explosiveness are both incredibly important and strongly related. How should we go about measuring one without bringing in the other?

But as I said earlier this week (and as others said in the comments of the original post), those are categories, not specific measures. They are the end-all, be-all of football in my eyes, but simply saying "We need to do better in field position" or "We need to average more points per scoring opportunity" isn't really a "Factor" of winning football in the same way that getting on base is in baseball or rebounding is in basketball.

On Monday, we stripped apart efficiency and explosiveness in a manner far more effective and interesting than I expected. That was exciting. And now it gets messy.

Assume for a moment that both Success Rate and IsoPPP (the measure discussed on Monday) are perfect measures of efficiency and explosiveness. They aren't, but they're pretty good, and for now we'll say there's no possible way to improve on them. That's two of the Five Factors. What about the other three?

Today, we'll deal with Field Position. Here's what I wrote about it in the Five Factors post:

But if explosiveness and efficiency matter so much, and if a single big or successful play can make such a difference, then it would stand to reason that the length of the field in front of us matters a lot, too. If, on average, you are starting 65 yards from the end zone, and if your opponent is starting 75 yards away, that's an enormous difference. [...]

All else being equal, the simple act of starting drives further up the field than your opponent can pay off significantly. (Of course, since field position is determined not only by special teams but also an offense's ability to get at least a first down or two before punting, "all else being equal" isn't the best way to put it. But you get the drift.)

Field Position might have more influences than any of the Five Factors. To win the field position battle is to move, kick, punt, and return the ball better than your opponent. Or at least three of the four. And you probably want to win the turnover battle, too. Field Position is a mix of a ton of other factors. How much of each?

First, some quick correlations from the 2013 college football season:

If you were to project defensive starting field position using only offensive success rate, you could do so with about 34 percent accuracy. That's not bad. What other factors do we have?

Using Brian Fremeau's special teams ratings, I created "Punt Margin" and "Kick Margin" measures by simply combining Punt and Punt Return Efficiency (Punt Margin) and Kick and Kick Return Efficiency (Kick Margin). I originally looked at giving heavier weight to kicks and punts (as opposed to returns) because not every kick and punt involves a return opportunity, but the best results came by simply going 50-50.

This is a quick-and-dirty exercise, but let's look at some more correlations.

The strength of these correlations are very close to the strength of the success rate correlations above. One could say that offensive/defensive quality and punting/kicking are equally important in the field position battle. And using both success rates and kick/punt margins, I was able create a Projected Field Position Margin measure that had accuracy over 50%. Again, not bad. One more factor, however, bumped it to nearly 70%.

We all know about the field-flipping potential of a non-armpunt turnover. You lose a fumble at your 20-yard line, and you're handing your opponent an easy scoring opportunity (along with, of course, a huge number in the field position battle). Turnovers have their own spot in the Five Factors list, but they are clearly and definitively related to field position, too.

Now, turnovers are also linked slightly to general offensive and defensive quality, but what we find here is that all three of these categories -- success rates, punting/kicking, and turnovers -- play rather strong roles in determining field position. 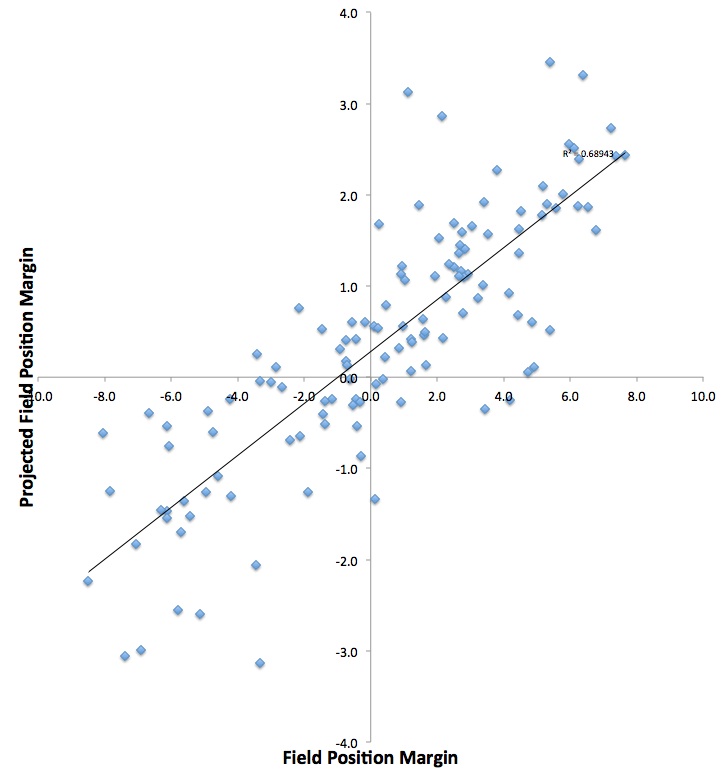 We'll get to turnovers soon enough, but as it stands we can basically recreate Field Position Margin, at a glance, with a series of per-play figures (if you used TO Margin/play, anyway). That's basically the goal of this sort of exercise.

It's not perfect, though. For starters, special teams continuity is minimal at best. Looking at teams' special teams ratings from one year to another shows you minimal (at best) correlations.

I threw field goals in there as well just as further proof that special teams are such low-sample exercises that fortunes can change rather drastically from year to year, even if personnel doesn't change that much. There is a stronger correlation for punts and kickoffs than there are for returns -- this also makes sense because of the higher sample sizes -- but fortunes change quickly and almost indiscriminately from year to year. That doesn't hurt the effectiveness of Projected FP Margin as a useful tool in-season, but it might hinder it as a tool for offseason projections.

Beyond that, the year-to-year correlations are a little too strong for my liking. Here's a table showing you each FBS team's actual and projected FP margin for 2012 and 2013:

There are some relatively extreme numbers in both 2013 Diff and 2012 Diff. While that doesn't automatically concern me, the fact that there's a 0.45 correlation between the 2013 Diff and 2012 Diff tells me there might be some other, quality-based factors at play here that I have not yet accounted for. It doesn't appear that IsoPPP fits the bill in that regard, but I'm going to keep tinkering.

So where are we?

The point of this entire Five Factors exercise was to spell out my vision of the fundamental pieces of football, then figure out the best way to measure them in isolation. We've been through three of the five right now, and basically what we have is this:

You can kind of see this coming together as an equation. We figure out the components for each Factor, we figure out the overall weight for each factor once everything is teased out, and then we add up the individual components (Success Rate, IsoPPP, Kick Margin, etc.) to create a master list. Fun, right?