Comparing Off. F/+ to total offense.

We looked at defense last time. This time, we'll switch to offense. My buddy Kyle Porter over at Pistols Firing Blog called this little project looking at the "most misunderstood" offenses and defenses in college football. I think that's a great way of summing up what I'm trying to do in these posts, where we compared traditional stats to advanced stats. 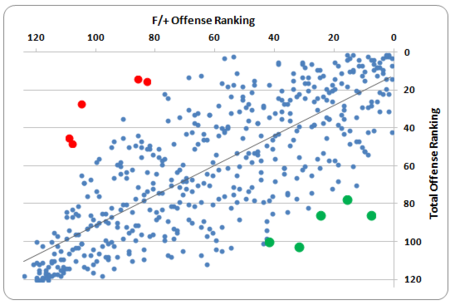 In the chart, I plotted all 480 offense over the past 4 years in college football. A team's F/+ offensive ranking for the season they played in is listed on x-axis. Their total offense ranking (yards/game) for the same season is listed on the y-axis.

As with defense, sometimes traditional stats and advanced stats agree. When comparing the total offense and F/+ rankings for each team, a difference of 10 or fewer spots occurred about 40% of the time. Recent examples of near perfect matches:

In the chart, I highlighted ten extremes.

Four out of the 5 green dots are SEC teams. This is the basically the opposite of what we discovered in the defense post with Big 12 teams. On defense, being on the field for an extra 15 snaps per game makes the traditional stats look bad - really bad in some cases. Even if you're playing good defense, yards given up on those extra snaps add up. Now that we're looking at offense, the slow-down, run-the-ball, huddle-up offenses in the SEC look worse in traditional stats than they do under the F/+ microscope. Here are the top 5 green dots:

The average offensive plays/game was 73.6 versus the NCAA average of 69.3 -- not a huge difference. Glancing at the teams, my initial guess was that the advanced stats were punishing these teams because they played relatively easy schedules. After looking at Brian Fremeau's offensive SOS rankings for each team, this suspicion was confirmed. The average offensive SOS for these five teams is 109, so even if these teams put up decent offensive numbers, the advanced stat systems didn't take them seriously.

This is just another example of another reason why you should be wary of using traditional stats. There are many things that can skew a simple yards/game measure...SOS is just one of them.

To cap this off, let's look at the top 25 in both the green and red categories.