Attempting to find, and exploit, a team's "DNA."

In case my seven-part series on scatter-plotting teams' F/+ ratings didn't convince you, I am kind of obsessed with finding new ways to compare teams to one another. I'm pretty excited about this one. It's something I've had in mind for awhile. Frankly, I don't think it's a finished product just yet, so I'd really like to get your feedback on how to improve it.

Here's what I'm attempting to accomplish: Ideally, I'd like to find a way to take the "DNA" of a team, plug them into a spreadsheet, and find the 20(ish) most similar teams to them in college football over the past few seasons. I think this will be valuable for a few reasons:

Let me say up front that I am keeping this simple. The fewer the inputs, the easier it is to process the output. Also, this analysis leans more heavily on offense than defense. I welcome your input.

Every team from 2007-12 is included in the system. This is a simplification -- if you want the details, let me know -- but teams are compared against each other by determining how many standard deviations away from the mean they are in each category.

It's easier to explain by using an example. Let's look at Kansas State's 2012 team. These numbers will mean almost nothing in isolation, but bear with me for a moment. Here's K-State's profile: 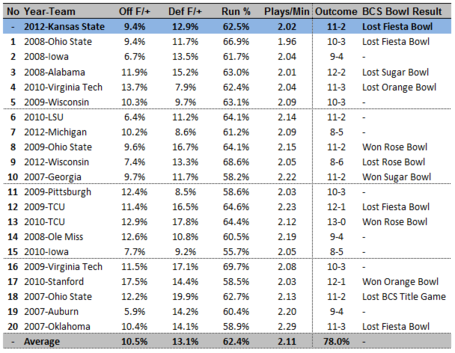 You'll notice that I listed each team's actual statistic in each category rather than the deviations from the mean figure, mainly to make this all easier to digest. So here's a group of 20 teams that have a very good offense, an excellent defense, run the ball a lot, and are S-L-O-W on offense (and I mean slow -- K-State was in the fourth percentile in plays/minute).

You may notice that I left off special teams. This is simply because the table is busy enough as it is without another column. Special teams is factored in when calculating similarity ratings, but as the least important factor it does not make the cut in the visual.

What can we learn from this list? A few things.

I found it interesting that four out of the top six on the list (including K-State) lost BCS bowl games. Is there something about this profile that makes teams unsuccessful against other really good teams?

Finally, here's where K-State and their peer group compares to BCS title winners: 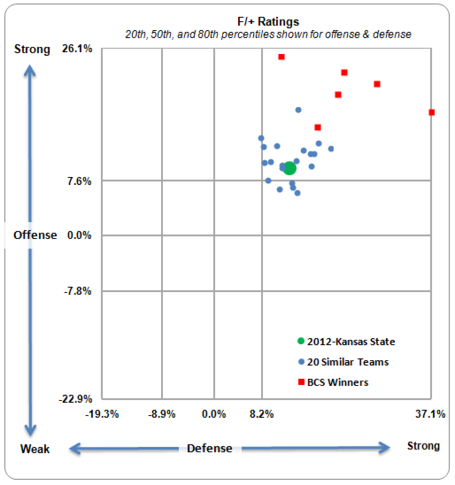 Generally speaking, this group of teams is very good, but not quite good enough to win a national championship.

Thoughts? I'll come back to this in future posts. I'd be happy to run your team for you. Let me know what you think in the comments.