Wrapping up the F/+ conference tour

Share All sharing options for: Wrapping up the F/+ conference tour

We began this journey way back on April 9, when everyone just assumed the Heat were going to win another title instead of knowing it for a fact. It's time to take a step back and see what we've learned along the way.

Let's start this post with a throwback to the first post in the series...a look at where BCS bowl game participants (orange) and BCS title winners (green) appear on the chart you are now intimately familiar with: 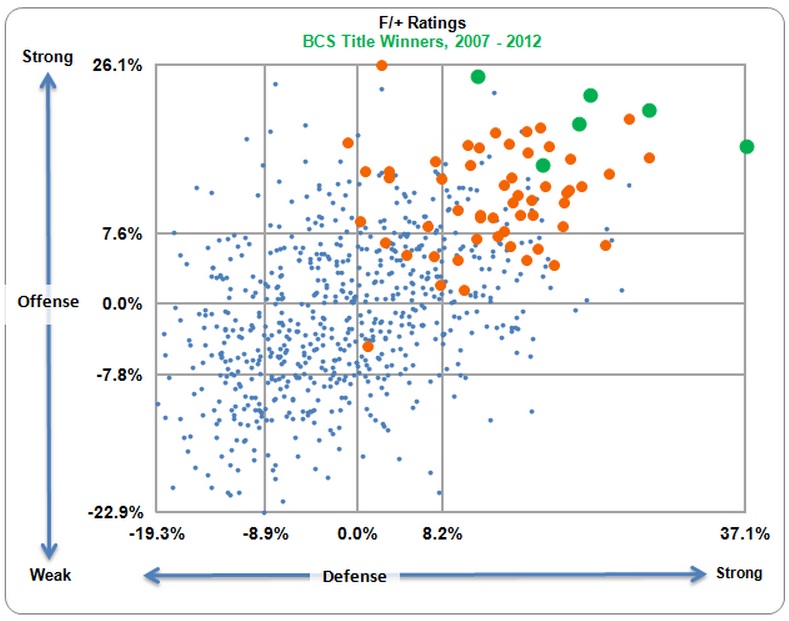 As you can see, the F/+ system really does a nice job of identifying the teams that will end up playing in the big ball games. I can say that because I have nothing to do with how the system works -- I'm only an admirer.

Out of 723 teams in the six-year period from 2007-12, only 66 teams had an offense and defense in the 80th percentile or better (the upper NE corner of the chart). It's easy to see that all six BCS title winners fit into this category. How about the super elite teams with both sides of the ball in the 90th percentile or better? Now we're down to 24 teams. Let's take a closer look at the best of the best. These 24 super-elite teams are ranked by their overall F/+ rating. 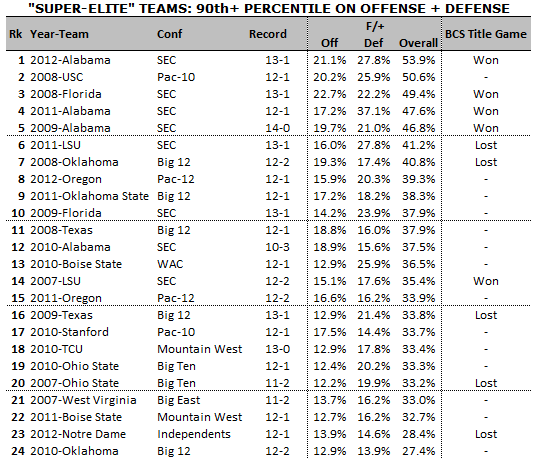 It’s important to remember that these are not necessarily the top 24 F/+ teams over this time period -- there are some teams that have a higher overall F/+ rating than those listed above, but they were below the 90th percentile on one side of the ball. As an example, Cam Newton’s Auburn team had an incredible offense (second-best in the last six years), but their 87th percentile defenses misses the cut for this group.

* Excuse me while I stare out the window for a few moments.

How about this: The 2010 season has the most representation on this list. Six teams in 2010 had offenses and defenses in the 90th+ percentile. None of those six teams played in the title game. Auburn and Oregon were both a little too unbalanced to appear on this list.

Boise State’s 2010 team wins the award for having the best team by a non-BCS team over this time period. The Broncos' overall F/+ score was the eighth-best among all 723 teams over the last six seasons. TCU’s 2010 team is 23rd-best among this same group.

Now that we’ve rubbed elbows with the college football elites, let’s turn our gaze to the shadowy depths of the game. Only 16 teams have managed to be absolutely horrible on both sides of the ball: 10th percentile or lower. Don’t worry, I’ll hold your hand as we tiptoe through this house of horrors: 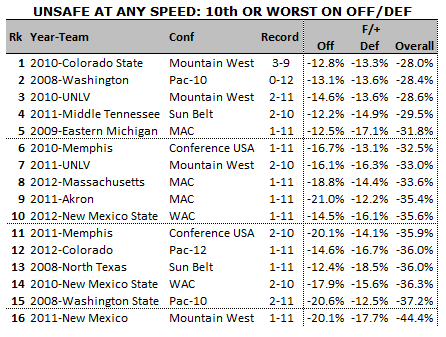 These teams are ranked from the best to worst overall F/+ ratings. Congratulations, Colorado State. You can hold your head high among this group of misfits. Isn’t it interesting how almost all of the super-elites managed to lose at least one game, and all but one of these teams managed to win at least one game?

The Pac 10/12 put three separate programs on this list, a distinction they share with the Mountain West (things you won’t see on their next league commercials).

You may be wondering: Yes, New Mexico has the lowest overall F/+ rating among all 723 teams in this six-year period.

What Have You Done For Me Lately

One last time. Let’s look at offenses and defenses based on the following weighting system:

Here’s a look at the top 25 F/+ teams in the familiar scatter-plot format. In the interest of actually being able to read the team names, I zoomed in on the chart. You are looking at the upper NE quadrant of the chart I usually show you (the 50th+ percentiles on both sides of the ball). 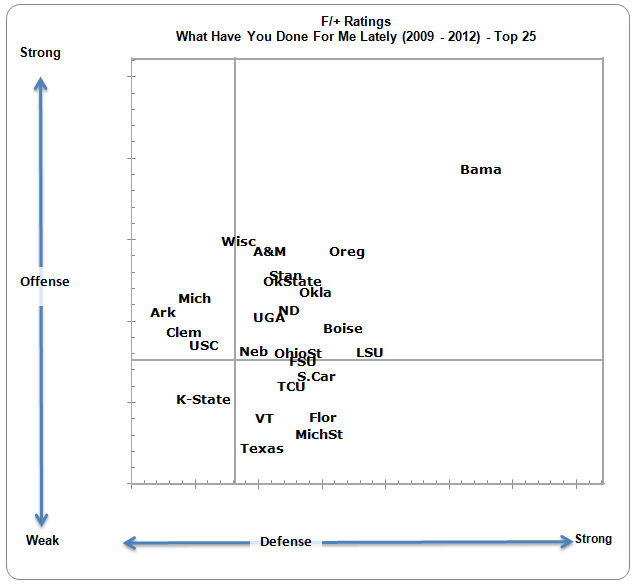 It’s almost sickening how much better Alabama has been than the rest of the universe over the past few years. I mean, really. In any other time period, Oregon might be the dominant program in college football. But we all just live in Alabama’s world.

I really like the nearly-straight line you can draw across this chart that includes Wisc-A&M-Stan-OkState-Okla-Boise-LSU. All of these teams have been just about equally good. You could make arguments for who has been best among all of these teams - just depends on your preference: offense, defense, or balance?

Finally, let’s take a look at each of the conferences as a whole: 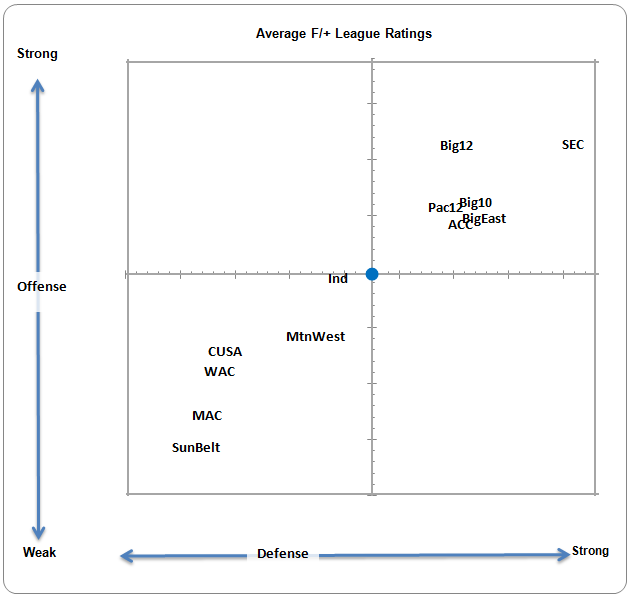 Should a conference be defined by its average rating, or it is only the top 2-3 teams that really matter? It’s an interesting question. The chart above takes a simple average of each of the teams in each conference. The SEC is clearly the best, with the Big 12 taking a somewhat distant second. The four other major conferences are nearly indistinguishable from each other, although the Big 10 has a slight lead on the rest.

The Big 12 closes the gap on the SEC here, but it’s still the SEC on top by a comfortable margin. A top 3 SEC team is 35% better than an average NCAA team. The Mountain West, led by Boise State but also buoyed by TCU in these calculations, knocks the Big East out of the top 6.

Folks, it’s been fun. I’m going to move on to another topic next (I’ll keep you in suspense for now). If you have any special requests, let me know. I’m sure I’ll come back to this analysis or at least touch on it in the future.