F/+ in the ACC: Will an elite program please stand up?

Share All sharing options for: F/+ in the ACC: Will an elite program please stand up?

One last stop on this tour of F/+ ratings in each of the major conferences: the ACC. Last time, I took you through the Big 12. A brief review:

In the chart below, the NCAA logo is the average for all FBS teams. It is (by definition) at the intersection of the 50th percentiles of offense and defense. Each conference's average F/+ rating over the past six years is plotted on the chart as well. Onto the analysis.

The ACC's average F/+ rating over the past six years is very close to the averages of the Pac 12 and the Big 10. The ACC, on average, has played the worst defense in any of the major conferences. 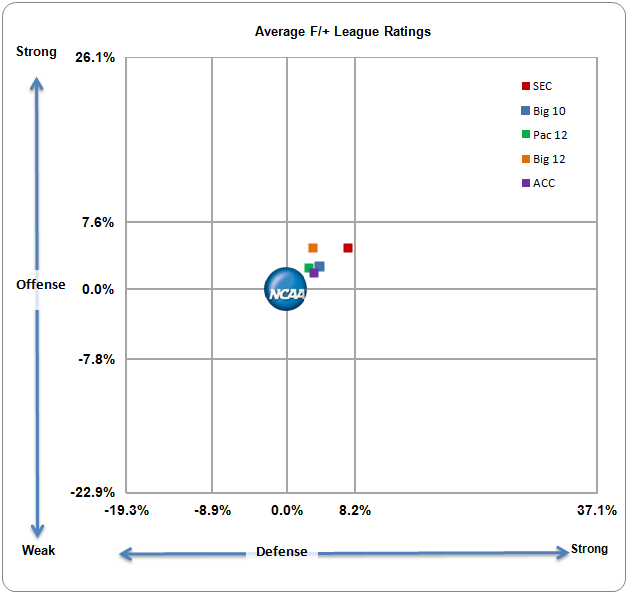 In the chart below, I added gray dots for every ACC team covered in this time period (72 teams).

-The "1" in the chart below represents the average F/+ offensive and defensive rating for every team who finished with the best record in the Big 12 over this 6-year period (and so on for every 2nd place, etc.). 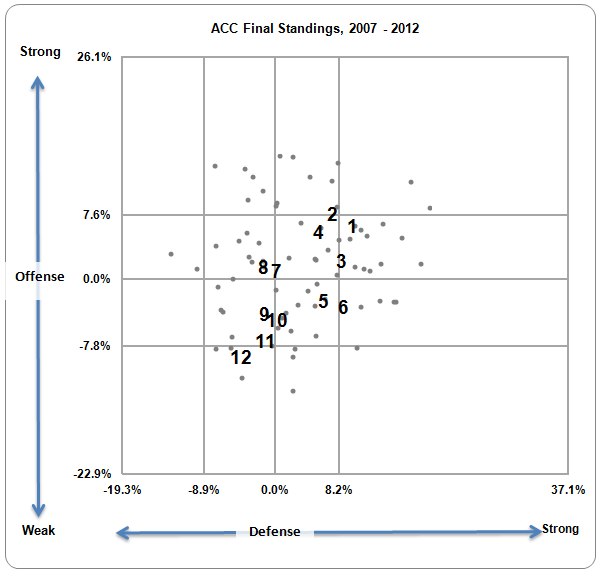 -Only one of the conference champions over this six-year period is in the extreme NE corner of the chart. Compare this to the SEC and the Big 12 (both leagues had 7 out of 7 champs in this corner). The ACC had only two teams in this elite corner of the graph over the last six seasons. I'll get more into comparing conferences in my next entry. 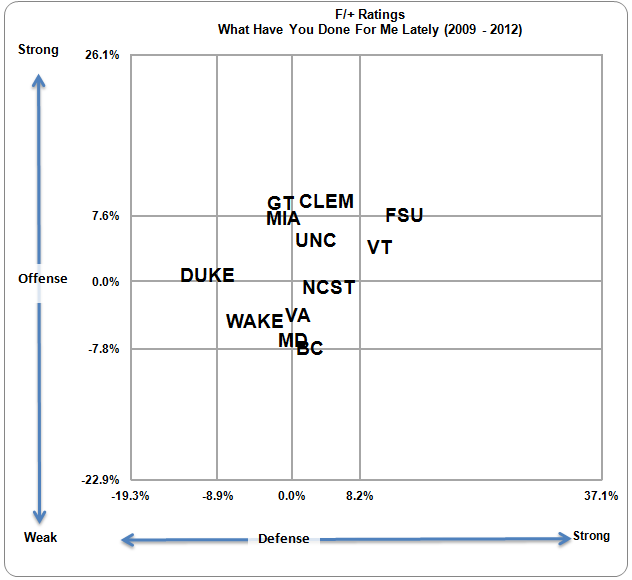 -Here again, Florida State is the only team that could be considered an elite program given the weighting system. Each of the the other major conferences had at least two teams in the NE corner. It seems like the ACC is just waiting for one or two teams to break out of the pack.

-It's difficult to say who owns the weakest program over this time period. Maryland? Wake? BC?

Let's take a look at the best and worst offenses in the ACC during this six-year period. I highlighted teams that appear on both top 10 or bottom 10 lists. 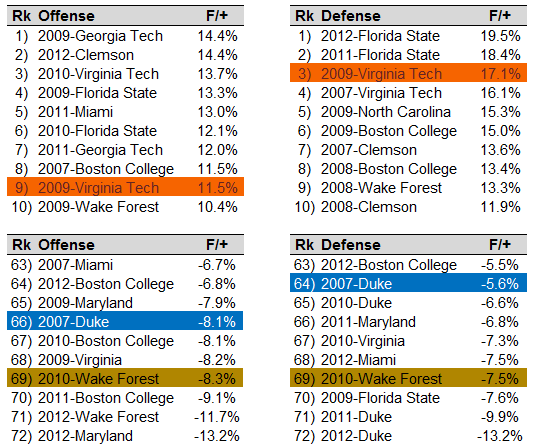 -I think it's fair to say that the 2009 Virginia Tech team was the best ACC team over this six-year period. That team did not play for the conference championship due to their conference losses to Georgia Tech and UNC.

-The worst offenses and defenses in recent league history both came last season. Let's take a closer look. First up: Maryland. The Terrapins averaged 4.4 yards/play, 1.3 yards less than the NCAA average. Think about how much 1.3 yards per play adds up over the course of a season. The average team ran 907 plays last season, so Maryland was approximately left about 1200 yards on the table when compared to an average offense.

Okay, how about Duke. Remember how they started out fairly strong last year? They were 6-2 on October 20th after a win over North Carolina. Then they lost five in a row, giving up no fewer than 42 points in each of their remaining games. I'm not a big fan of the traditional rankings, but Duke tallied up this unsavory distinction: they were ranked 100+ in each of the following categories: total defense, scoring defense, rushing defense, and pass efficiency defense.

One more thing: let's take a quick look at the outliers in the ACC over the past six seasons: 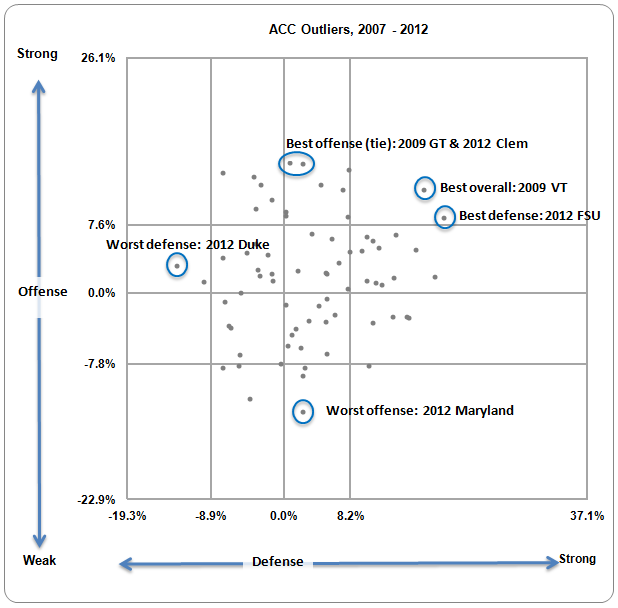 My next entry will wrap up this series with a broad view of each of the conferences, some national outliers, and a few quirks I found while doing this analysis.