Share All sharing options for: F/+ in the Big 12: Bedlam at the top

Let's continue our tour of every major conference's F/+ ratings. Last time, I took you through the Pac 12. This time, we'll walk through the Big 12. A brief review:

In the chart below, the NCAA logo is the average for all FCS teams. It is (by definition) at the intersection of the 50th percentiles of offense and defense.

The average Big 12 offense is every bit as good as the gold standard set in the SEC. It's really on the defensive side of the ball that the SEC sets itself apart from the Big 12 -- and the rest of college football. 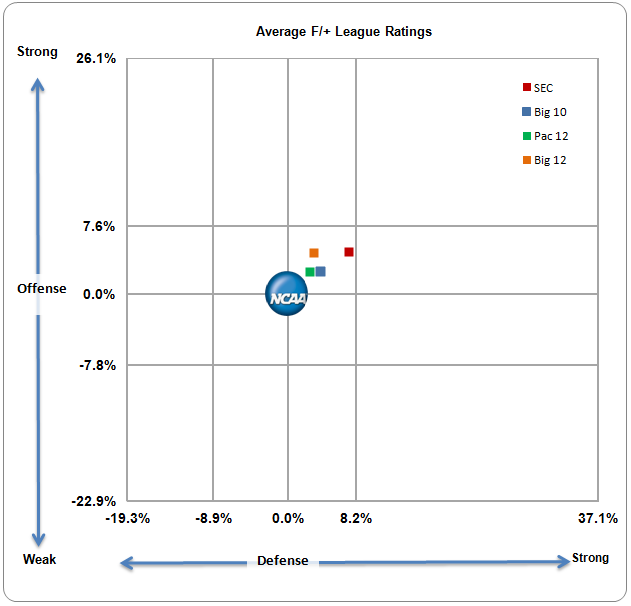 In the chart below, I added gray dots for every Big 12 team covered in this time period (68 teams).

The "1" in the chart below represents the average F/+ offensive and defensive rating for every team who finished with the best record in the Big 12 over this 6-year period (and so on for every 2nd place, etc.).

It's interesting how clumped together the 2 through 5 spots have been in the Big 12 over the past few years. The first place team, on average, has been set apart from the rest of the league, but there have been several solid challengers in most years. 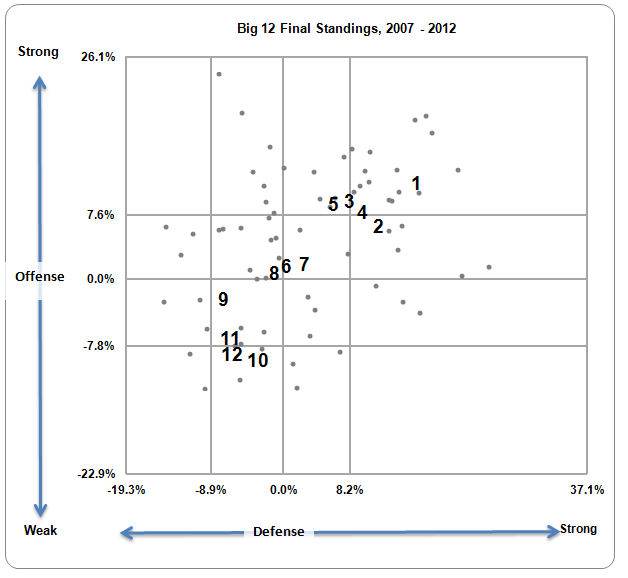 Now, here's a closer look at the Big 12 champions over this time period. The blue dot is the average of all seven of these teams (there was a tie in 2007).

All of the seven league champions are in the extreme NE corner of the chart (representing the 80th percentiles in offense and defense). The SEC is the only other league with all of its champs in this corner from 2007-2012.

The league's most recent champ - Kansas State - is also the weakest one (according to F/+) over this time period. The Wildcats actually shared a title with OU last season, but K-State received the league's BCS bowl berth. 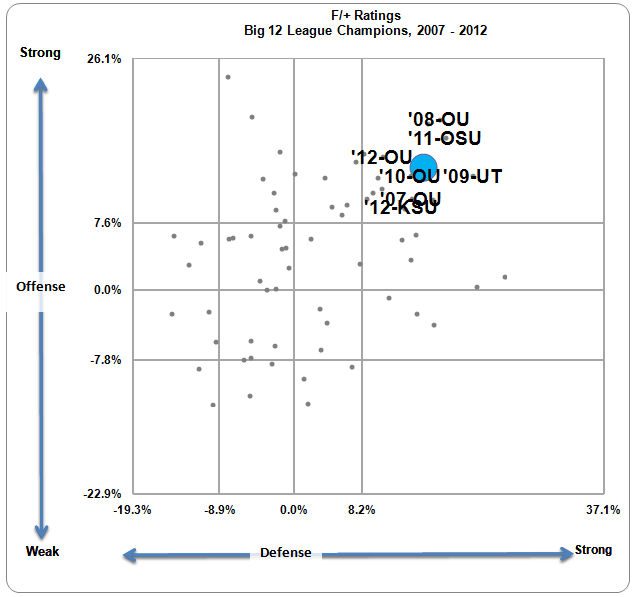 Okay, now it's time for a little fun. For each team currently in the Big12, I used my "what have you done for me lately" ratings system: F/+ ratings for each team weighted this way: 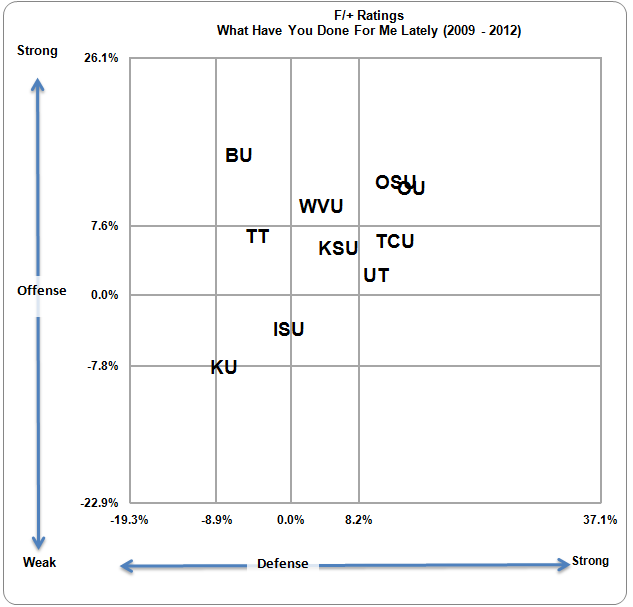 Aside from K-State's great run last year, Oklahoma State and Oklahoma have really been duking it out for conference superiority lately. This weighting system values recent performance, so OSU's near BCS title appearance in 2011 and pretty-solid outing last year are neck-and-neck with OU's good-but-not-great Landry Jones teams of the past two seasons.

More on this in a moment, but Baylor has had the best offense in the league and darn near the worst defense.

Let's take a look at the best and worst offenses in the Big 12 during this six-year period. I highlighted teams that appear on both top 10 or bottom 10 lists: 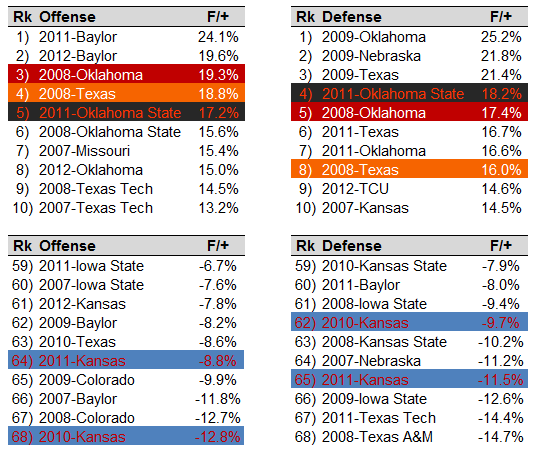 2008 brought us two of the best teams in recent league history: the Sam Bradford-led Oklahoma team that took on Tim Tebow in the BCS title game and the Colt McCoy-led Texas team that would’ve faced Tebow if it weren’t for Michael Crabtree’s amazing touchdown catch in Lubbock.

Oklahoma State’s 2011 team is the only other team to crack the top 10 on both sides of the ball. That team was a foot or two away from a game-winning field goal that would’ve avoided the 2OT loss to Iowa State in Ames.

Let’s see here...worst offenses in the Big 12...Iowa State, yep. Kansas, sure. Texas? Let me check that. Yes, the 2010 Texas Longhorns had the 6th-worst offense in the last six seasons of the Big 12. They never scored more than 24 points in Big 12 play.

Let’s take a quick look at the outliers in the Big 12 over the past six seasons: 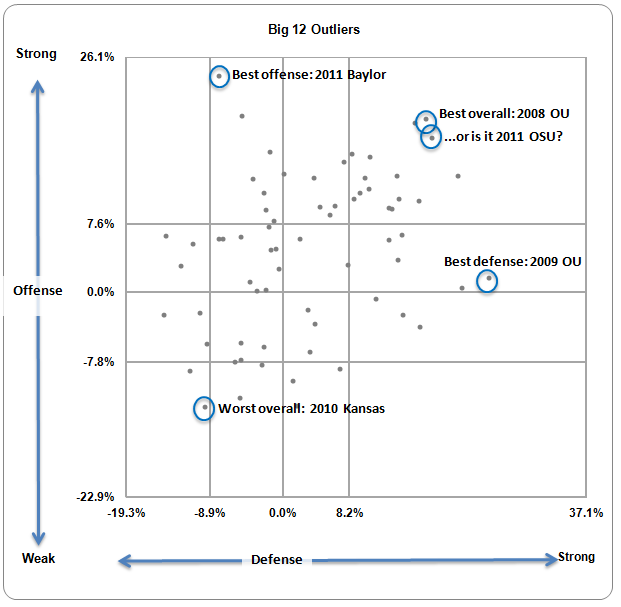 The 2011 Baylor team (think RG3) had the third-best offense in all of college football over the past six seasons. Unfortunately for Bears fans, they paired it with the #557 (out of 724) defense over the same time period.

OU had the 2nd-best offense in the Big 12 over this time period in 2008 (Sam Bradford), and the best defense in the league came to Norman one year later.

OSU’s 2011 season paired an excellent offense with a turnover producing machine on defense that almost put them in the BCS title game.

Next time, I'll wrap up the series with a look at national outliers and a few takeaways from this analysis.