Share All sharing options for: Offensive Drive Efficiency and the BCS Bowls

Possession-based metrics are a simple and intuitive alternative to play-based or point-based metrics (such as yards per play, points per play, yards per point). This is only an introductory look at the BCS Bowl teams, so theoretically these teams should be clustered around a small, elite part of the overall range for FBS teams. In other words, these are already some of the best offenses in the FBS, so the differences between them may not be very great relative to the entire FBS. 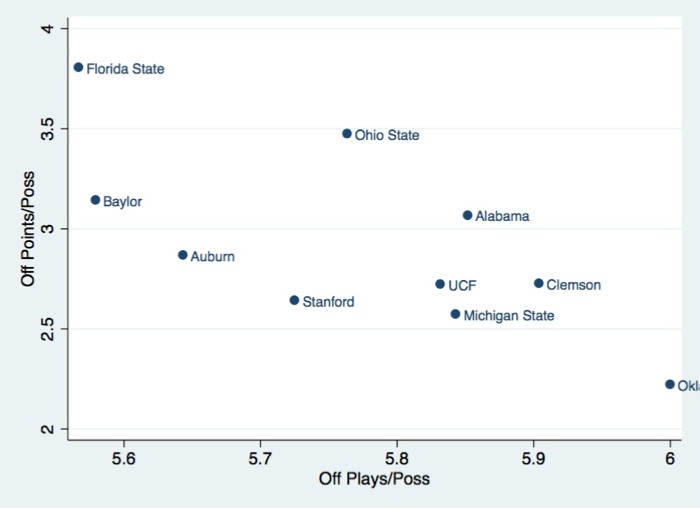 Same story, different side of the ball—Florida State is not only the most efficient in terms of offensive points per possession, but manages to have the shortest drives of all. That’s indicative of either a high number of explosive plays per drive or good starting field position. There’s some evidence to support that notion, too: Florida State is first in plays of ten or more yards, tied for first in plays of 20+ yards, second in the FEI field position index, and first in "short field drives."

On the other end of the spectrum, Oklahoma has far and away the lowest points per possession at 2.22, as well as the highest number of plays per offensive possession. The latter point isn’t necessarily a bad thing for the Sooners (at least there shouldn’t be too many three-and-outs there), but it does imply a good number of longer drives without points when also looking at the points per possession.

Again, the range isn’t very large between the BCS teams — all are good offenses, ranked between first and 51st in offensive F/+.

Plotting offensive and defensive points per possession on a two-way scatterplot gives a decent picture of the overall strength of a team and a way to quickly approximate match-ups in the bowl games. Obviously the goal for any team is to be as close to the top right-hand corner as possible (with Florida State). Unfortunately these aren’t opponent-adjusted numbers because I don’t have possession efficiency data for the entire FBS. 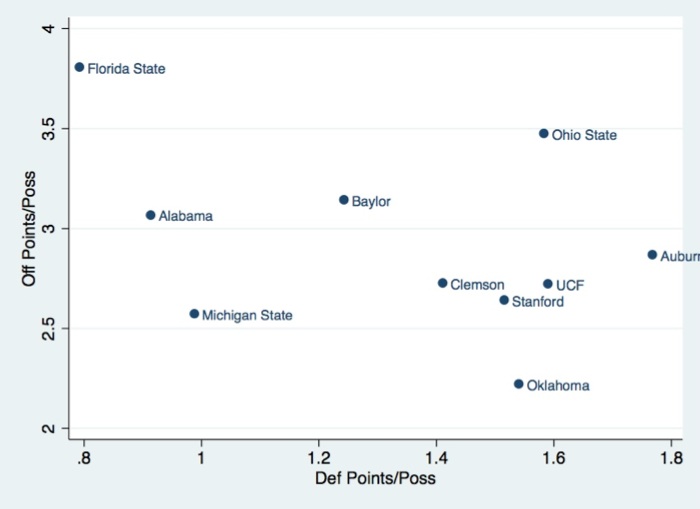