A look at which BCS bowl defenses get off of the field the fastest (and most effectively).

Share All sharing options for: Defensive Drive Efficiency and the BCS Bowls

We spend a good deal of time talking about and debating various efficiency metrics in football. While we frequently use points per play, yards per play, and yards per point metrics in our analyses, possession-based metrics are typically somewhat less common.

An old 1996 Bob Stoops essay on " Pressuring with a Multiple 4-3" in Defensive Football Strategies notes this:

"Our defense is anything but a ‘bend-but-don’t-break’ defense. We play to force the offense’s hand, to stop the opponent immediately and set our offense up with good field position. Our defense averaged 4.5 snaps per possession for the season. Fifty percent of our opponent’s possessions were three and out [in 1995]."

Even in the mid-90s, college coaches were using drive efficiency data to better understand their defense’s performance. It’s easy to see why - plays per possession (which Stoops quotes above) and points per possession are intuitively appealing, matching up well with what our eyes tell us while watching games. While points per play and yards per point produce more abstract numbers, drive-based metrics are easily and quickly understandable.

That doesn’t mean they’re perfect. While a defense would ideally want their average plays per possession to be as close to three as possible to signal a high number of three and outs, it is also susceptible to being skewed by one or two play drives that result in scores, like this one.

This week I took a look at defensive points per possession and plays per possession for the ten BCS bowl teams (if you’d like the numbers for your team, just ask in the comments).

This data is not opponent-adjusted, but I think it’s valuable nonetheless.

Here is a basic two way scatter plot of the two metrics. Teams in the lower left-hand corner are excellent at both getting their defense off the field quickly and limiting points per opponent drive, while teams in the upper right corner are proficient at neither.

Theoretically, a team in the lower right corner would be a bend-but-don’t-break defense - limiting opponent scores, but staying on the field for long stretches of time. However, none of the BCS teams seem to truly fit that bend-but-don’t break profile (using these two metrics). 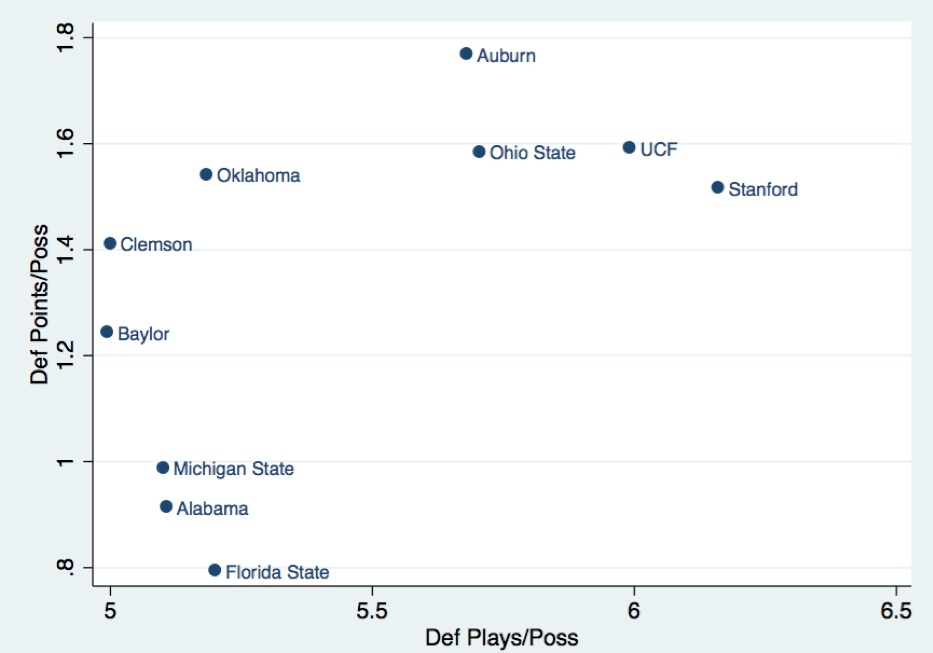 Clemson and Oklahoma excel at getting off the field, but allow more points per possession (likely off of explosive plays or poor field position) than their elite peers in Michigan State, Alabama, and Florida State.

Most TV analyses of the Rose Bowl have the MSU and Stanford defenses as roughly equal, and Stanford’s offense having the edge over Michigan State’s. Possession efficiency data complicates that picture: Michigan State’s defense allows more than half a point per possession less than Stanford’s defense. Further, the play an average of one less play per drive than their Cardinal counterparts.