There was really only one option this week, wasn't there?

Share All sharing options for: The Key Drive: Alabama 21, LSU 17

Welcome to the latest installment of The Key Drive, a series that focuses on one drive a week that highly impacted the outcome of a game, essentially the drive that was the key to winning or losing. In this week's piece we look at how Alabama salvaged their season with a perfect two minute offense.

You can find all the previous key drives under the Key Drive Story Stream.

No. 1 Alabama visiting No. 5 LSU in Death Valley, but if you are reading this piece I am sure you know all about that. This game was probably the most exciting version of this rivalry in the last two years. It was more exciting than the 9-6 regular season battle, and both offenses were playing well, unlike in the 2011 National Championship game, when LSU decided to climb into a hole offensively. LSU had been on a charge in the second half and took a 17-14 lead with 12 minutes remaining. With 1:43 remaining in the game, LSU missed a field goal that would have forced Alabama to score a touchdown to to win the game.

Alabama comes out in a simple shotgun set, two receivers to each side and a running back, T.J. Yeldon, lined up next to McCarron. LSU comes out with what looks to be three defensive lineman, two linebackers, and six defensive backs. Before the snap, both the slot corner to the far side of the field and the linebacker on the opposite side walk up to the line like they are going to blitz. It appears that LSU will play a soft zone on this drive while bringing extra pressure from one of the linebackers or slot defensive backs.

At the snap, the slot corner pulls back into zone coverage while the linebacker blitzes off the opposite edge. Alabama's receivers to the far side of the field run a simple route combo; the slot receiver runs a "7 and stop" route, and the outside receiver runs a sort of skinny post, or even a seam route, to try to get over the top of the short defenders and find a hole in the zone. 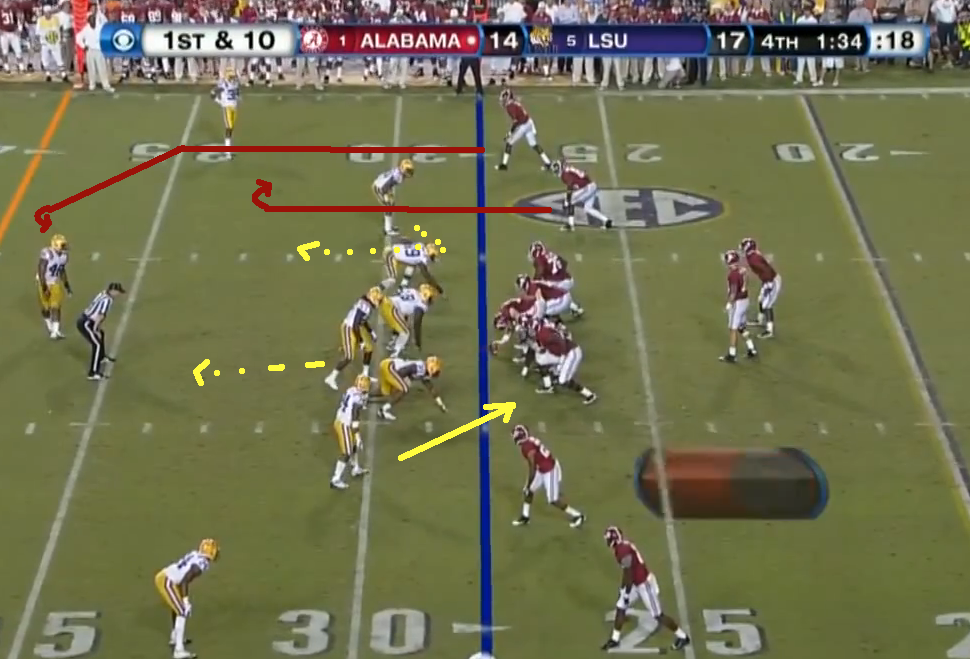 Somehow the slot receiver finds an open hole in the zone between both corners, and A.J. McCarron is able to deliver an accurate throw that also allows Norwood to get a lot of yards after the catch. It appears the fake blitz by the slot corner did not allow him enough time to get back into coverage properly and allowed Norwood to find an open spot.

Alabama hurries to the line and lines up in the same formation as before. Again, LSU walks up its linebackers like they are going to blitz, but both peel off into coverage. This time, the slot corner to the near side of the field blitzes off the edge. McCarron quickly sees that LSU is playing man coverage on the two receivers to his right. The Alabama receivers are running one of the most popular passing routes there is. The Smash Route is a two man route where the outside receiver runs a simple "7 and stop" or a comeback route, and the slot reciever runs a deep corner to the sideline, about 15 yards downfield. 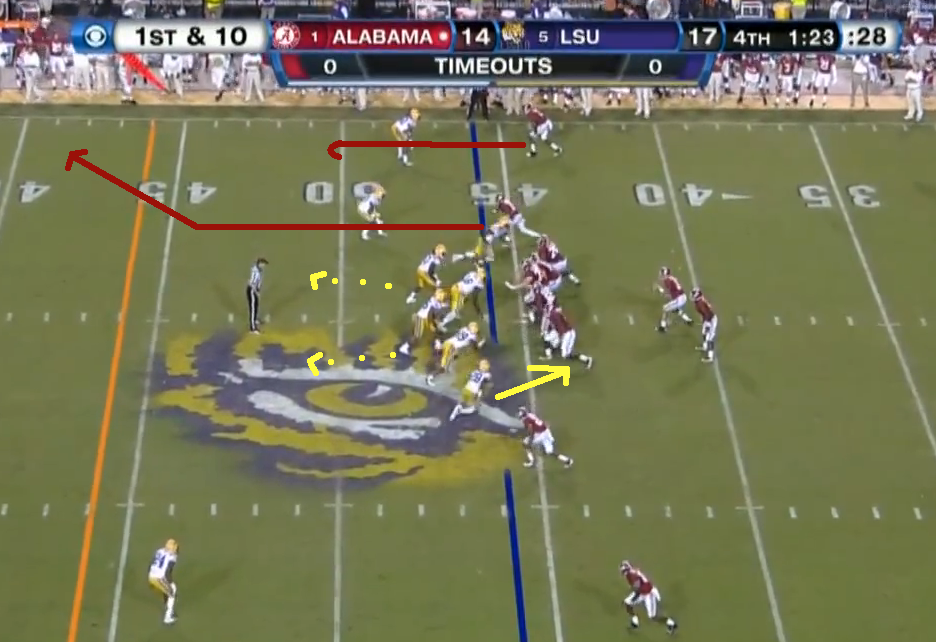 This route can be open against zone coverage or man coverage. In this instance, with LSU playing man defense, McCarron does not have to worry about the outside corner releasing back on the corner route behind him, and simply has to rely on Norwood to beat his man to the outside. Another pinpoint pass by McCarron and a great catch by Norwood puts Alabama across midfield.

As the drive was developing, I wondered why Alabama had T.J Yeldon in at running back. I don't think anyone can deny the kid's talent, but do you really want a true freshman running back in on a potentially game-winning drive, with one minute left, and no timeouts? Apparently so, and after this block I can see why. 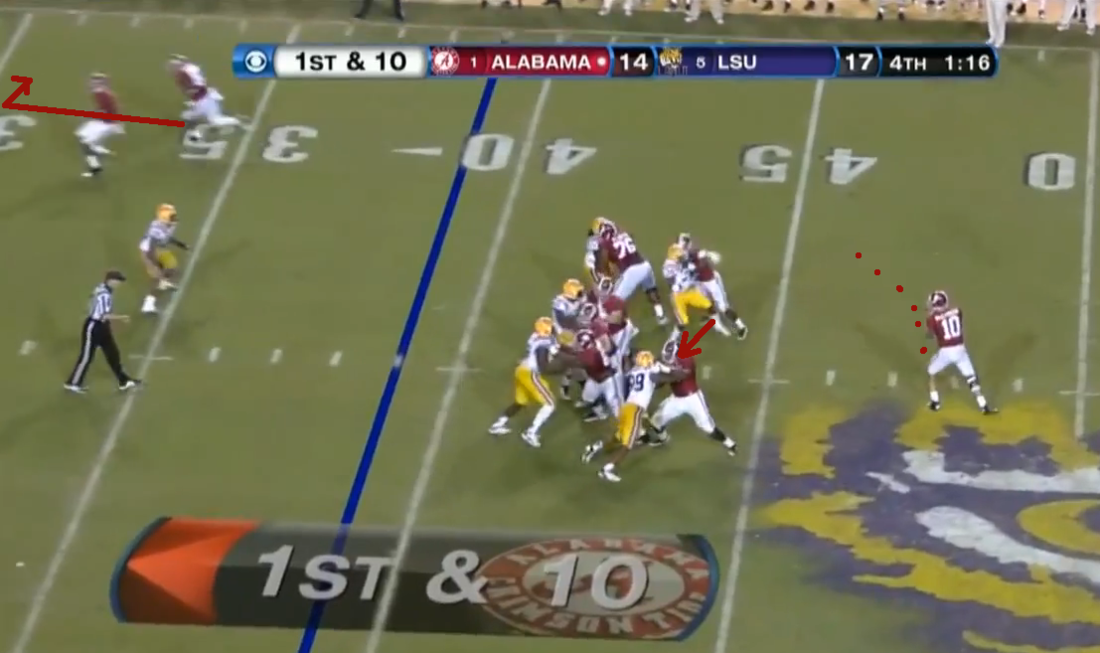 Yeldon stonewalls the outside blitz, then takes his man back inside to the middle of the line. The blitzing corner has no shot at making a play on McCarron. Because the defender assigned to the outside of the pass rush just got thrown into the middle of the line, McCarron can easily move to his right and step up a great throw to Norwood, who was running a comeback route back to the sideline. This route was great as well. Norwood pushed his man deep to give him plenty of room for the comeback, and made sure to get out of bounds while getting the first down on the tough catch. Alabama is making this look very easy.

I guess when you're down four with little time left, you need to take some chances. But boy, I know this pass made a lot of Alabama fans nervous. LSU again brings four guys on the pass rush, and doesn't get much pressure on McCarron. McCarron has all the time in the world to throw and probably did not need to move around as much as he did. I think he was expecting much more pressure.

So far, the Alabama offensive line has done a great job of giving the quarterback plenty of time to throw on this drive. On the pass, this was a great route adjustment by Norwood. I believe (though it is hard to tell from the TV angle) the receivers were running the Smash route again. But once Norwood saw that McCarron was in trouble he just turned towards the endzone and took off. The receiver was open if McCarron could have gotten just a little bit more on the ball, but he did not really have his feet set to throw this ball perfectly. I also think the ref did the right thing by not calling pass interference, as the defensive back, Micah Eugene, just got his feet tangled up with Norwood.

This was a shot of the LSU crowd before this play, pretty much sums it up. 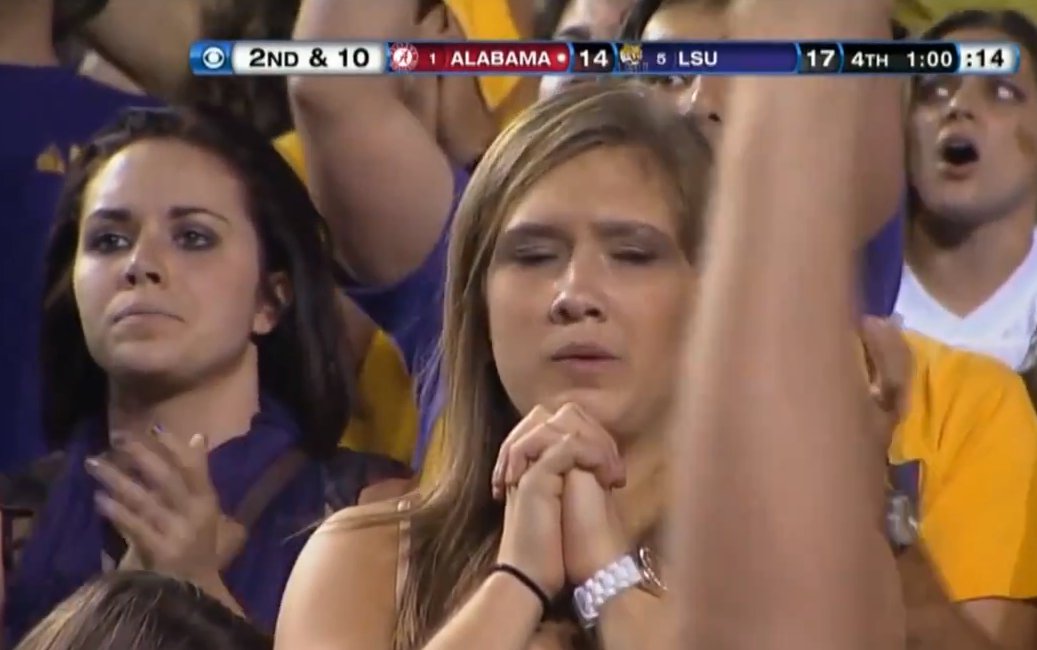 Luckily for football fans everywhere, this play was already looked at in-depth by Chris Brown of Smart Football over at Grantland, so I will just include his main points. The article does a great job of breaking everything down and is worth the read.

A different picture starts to emerge just after the snap, starting with LSU’s two interior defenders: linebackers Kevin Minter and Cody Townsend. Both are lined up as if to blitz, but as Alabama receiver Norwood releases off the line, Townsend follows him. Meanwhile, Minter begins to retreat as the offensive line releases to block for the screen pass. Without knowing the particular defensive call, to me this looks like these LSU players were playing a "key" or "peel" technique, which means that they were told to blitz McCarron unless Norwood or Yeldon released into patterns. When Norwood does, Townsend goes with him. The key is in how Minter reads Yeldon.

On a screen pass, the running back should not simply pretend to pass block and then release for the pass. Instead, he must do his best to actually make contact with a blitzer to truly sell the screen. It is often that blitzer who is responsible for the running back, and faking a block can actually force the defense to spy the runner with two defenders. On this play, Yeldon does an excellent job of stepping into defensive back Jalen Mills, who is so intent on getting past Yeldon that he forgets about him. This action makes Minter’s release one step too slow.

On this drive I think A.J. McCarron did a great job of reading the defense at the snap of each play, and quickly identifying where to go with the ball. It helped that, on four of the five plays, his first read was open, but he simply took what the defense gave him while still being agressive with the ball. This was one of the most well run two-minute offenses you will see, and in the Game of the Century III, it made all the difference.