Welcome to the latest installment of The Key Drive, a series that focuses on one drive a week that highly impacted the outcome of a game, essentially the drive that was the key to winning or losing. Notre Dame seems like the real deal, so let's take a look at how the Irish went up for good against Oklahoma.

You can find all the previous Key Drives under the Key Drive Story Stream.

I don't think it can get much better than Notre Dame visiting Oklahoma on a Saturday night in a matchup of Top 10 teams. Heading into the fourth quarter, Oklahoma had managed to get into the red zone twice but was unable to score a touchdown against the stifling Notre Dame defense. But with nine minutes remaining, Oklahoma tied the game up at 13-13 with a rushing touchdown from the "Belldozer" (great WWE nickname), Blake Bell. That rushing touchdown was Notre Dame's first rushing touchdown given up all season. That is incredible. The OU crowd was getting into it, and Notre Dame was probably only going to have two or three more chances to get a go ahead score.

In this play, ND comes out in a formation that you don't really see that often anymore. Notre Dame lines up with two tight-ends, one to each side, and a receiver to each side as well. I can't remember the last time I saw a team line up with two tight ends not in a goal line situation (granted, I am a Georgia Tech fan, so I don't see that much normal offense). The play itself is very simple. The wide receiver to the far side of the field runs a simple out route, and Everett Golson puts the ball on the money for an eight-yard completion. 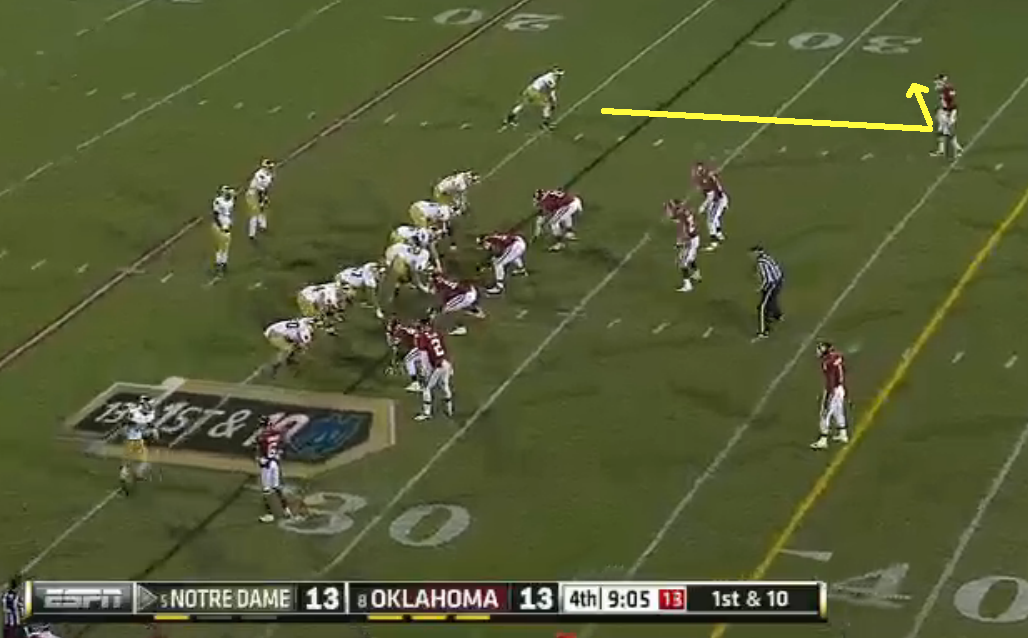 This play is a thing of b-e-a-uty. Oklahoma lines up in the same formation as before, but Notre Dame puts Golson under center and runs a play-action fake to the running back. Oklahoma is lined up in a base 4-3, playing Cover 4 in the secondary. That means that each corner and safety is responsible for his own respective deep quarter of the field. However, the play action pulled the safety a little too far upfield on the near side of the field. As you can see in the graphic, this gave Chris Brown plenty of room to turn inside on a post route and run underneath the ball. 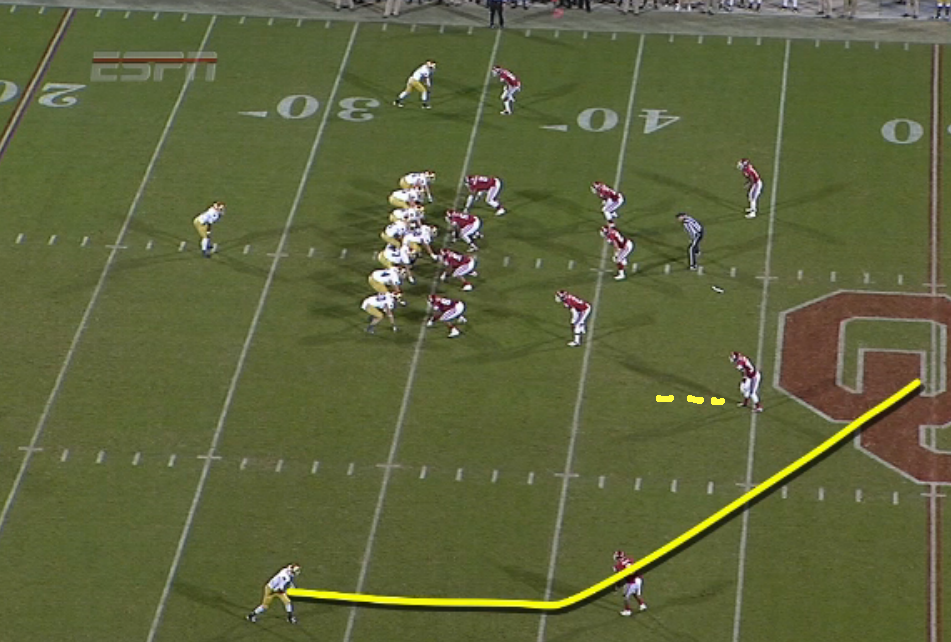 This is also a great throw by Golson. Puts a lot of air underneath the ball, throws it to the inside where he knows there is no safety, and lets his receiver run underneath it instead of making a pinpoint throw. This is a great play.

A simple zone read to the running back. There is actually a lot of room to the outside but the safety, Tony Jefferson, makes a great play and wraps up for a nice stop. Herbstreit mentioned that this safety is very aggressive, and after the other one got beat deep on the previous play, I am surprised that Jefferson was up at the line so fast.

This is a great play call designed to both take advantage of the aggressive defense of OU and also give Golson a run/pass option. On this play Golson simply rolls out to his right, and the running back sprints to the flat on a simple arrow route. I think the combination of the rollout and Riddick sprinting at the line caused the linebackers to pause on the run fake, as they are all late getting to Riddick once the pass is thrown. 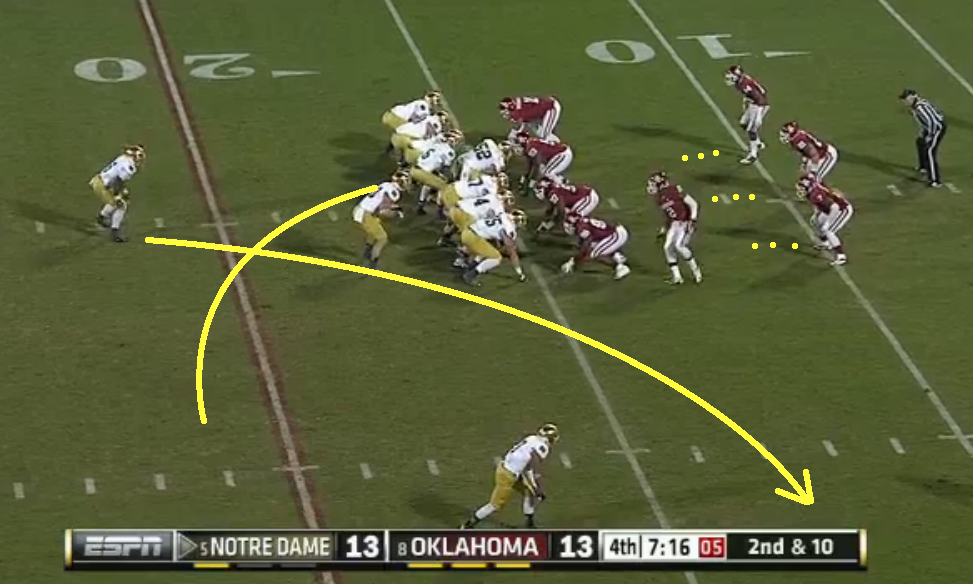 Riddick does a great job tiptoeing along the sideline to gain some extra yards. If he hadn't gotten shoved so hard I think he might have been able to get in the endzone. In four plays, ND is at the 3-yard line with 1st-and-goal and has earned 5.12 equivalent points. I'd say that's pretty efficient.

This is a great play by Hurst. ND again tries to take advantage of the OU defense with a play-action fake. This time, however, the OU defense is sitting on it and prevents anyone from getting open. Seeing no one open, Golson tries to run into the endzone to his left. Hurst makes a great play coming up, prevents Golson from gaining any yards or getting outside, and then makes an outstanding open-field tackle. 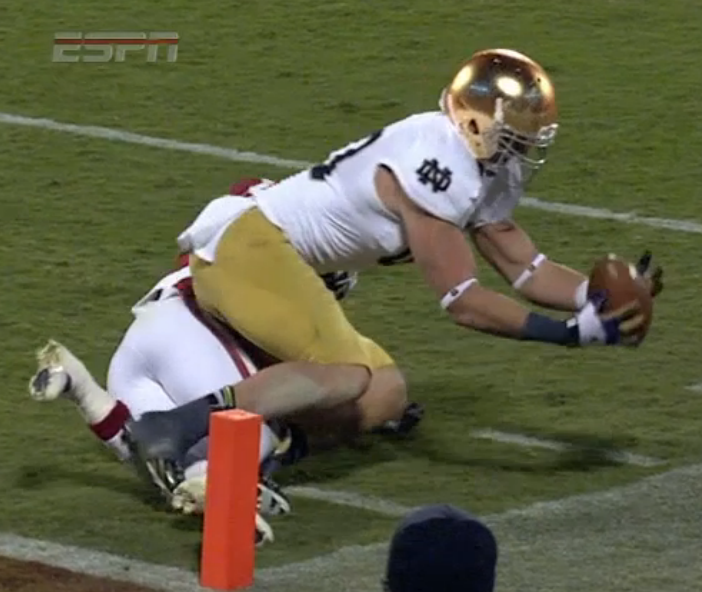 I can't tell who is lucky on this play: Notre Dame or Oklahoma. Oklahoma comes out with a corner blitz with Hurst. I haven't seen, or at least haven't noticed, many teams doing this at the goalline. It leaves the receiver open for an immediate pass if the safety can't get over in time. Luckily Golson doesn't see it immediately, and Jefferson is able to challenge Eifert on the catch. From here, though, Eifert makes an incredibly athletic catch after Jefferson roughs him up as soon as the ball gets there. Eifert bobbles it for a little and then makes a diving catch at the one. If the ball comes out a little earlier, then perhaps it can be thrown straight into the endzone instead of shorter and to the outside.

Notre Dame is just trusting Golson here. They line up with 5 wide receivers, no one in the backfield with Golson. At the snap Golson pauses, and then just runs behind his offensive line and dives in the endzone. 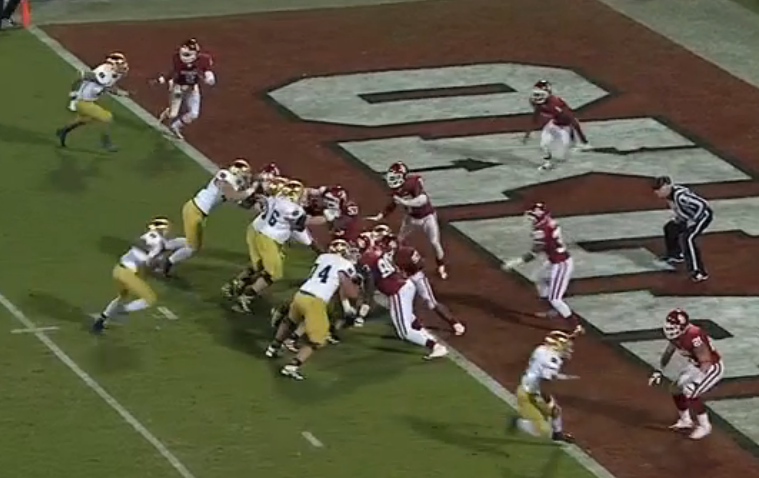 With no lead blocker, this could be a risky play if Oklahoma is able to get a rusher off the edge of the line. I think that the OU defenders were worried about the threat of Golson scrambling on a passing play, not just a simple QB dive. The Notre Dame offensive line also gets a great push and gives Golson room to dive in.

This was a great drive for Notre Dame, and I came away really impressed with Golson. He made accurate throws with a lot of zip on them and didn't really make a bad decision the whole drive. Notre Dame used play action three times on five passing plays to take advantage of an agressive Oklahoma defense. While I was impressed with the play by Hurst and Jefferson on OU, one bad play by a deep safety really put them in a hole. It is tough to stop opponents when you allow a 50-yard pass. From here, Notre Dame rode their momentum to a 30-13 road win against a Top 10 team.