1996 had a classic upset, a classic Rose Bowl, and a terrifying national champion

Share All sharing options for: 1996 had a classic upset, a classic Rose Bowl, and a terrifying national champion

I was a senior in high school in 1996, and I had a new girlfriend, colleges to apply to, etc., so my attention span was probably a bit more limited this fall than it was in others. Plus, Oklahoma and Oklahoma State both stunk, so the the local media weren't spending quite as much time and detail on the sport.

Ranking the 10 best college football programs of each decade

The 23 most perfect offenses in the history of college football

The 25 best college football defenses of then and now

The 20 best college football matchups of all time 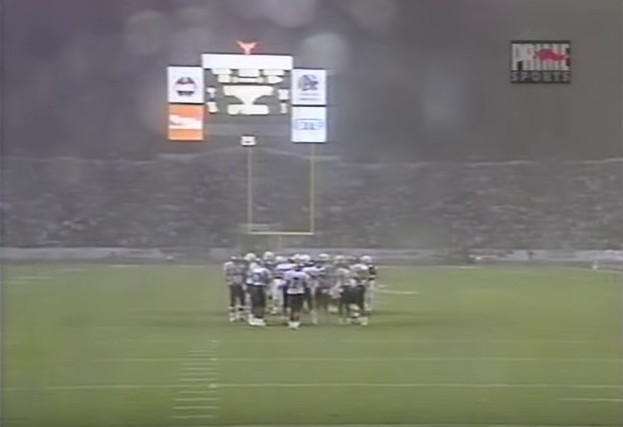 And speaking of Texas, I guess I also remember this, huh?

It's hard to think of Texas beating Nebraska as a massive, classic upset ... but that's exactly what it was. Texas was 7-4, and since losing to ASU, Nebraska was Nebraska again.

Okay, so I remember a decent amount. Here are your estimated S&P+ ratings.

How would a College Football Playoff have taken shape in 1996? Pretty simply.

FSU and Arizona State (No. 1 and No. 2 in the December 9 AP poll) were unbeaten at the end of the regular season, so they were in. Florida (No. 3) had lost only to FSU at the end of the season. The Gators were probably in. Ohio State (No. 4) had lost at home to Michigan and wouldn't have been a complete slam dunk, but thanks to Nebraska's famous loss to Texas, the Buckeyes probably still get in.

The end-of-regular-season Est. S&P+ top 5 would have laid out similar candidates: 1 Nebraska, 2 Florida, 3 FSU, 4 Ohio State, 5 Arizona State. Nebraska's second loss (and the lack of a conference title) would have just about eliminated the Huskers.

The other candidates just weren't up to par. Big Ten co-champion Northwestern was 9-2 with a substandard rating. Big 12 champion Texas had four losses. None of three Big East co-champions (Miami, Syracuse, Virginia Tech) ranked higher than 10th in the AP poll. BYU would have had a decent case with the 13-1 record but lacked in the quality wins department.

So yeah, you probably end up with 1 FSU vs. 4 Ohio State and 2 ASU vs. 3 Florida. And if the Rose and Sugar Bowls were any indication, these games would have been entertaining as hell.