In FBS, there is almost no correlation between yds. per completion and completion rate

Share All sharing options for: In FBS, there is almost no correlation between yds. per completion and completion rate

Throughout the process of writing previews about each FBS team in the offseason, I inevitably find myself making some generalizations. It's impossible not to. I don't have time to review film of each game or read about each incoming recruit, so I make what I hope are reasonably educated inferences.

While it's certainly true that you can gauge quality by looking at these two figures (and the resulting "yards per pass" figure), I assumed there would be a general correlation between the two. Turns out, that's not really the case. Looking at the 153 FBS quarterbacks who threw at least 100 passes last season, I ended up with this scatter plot: 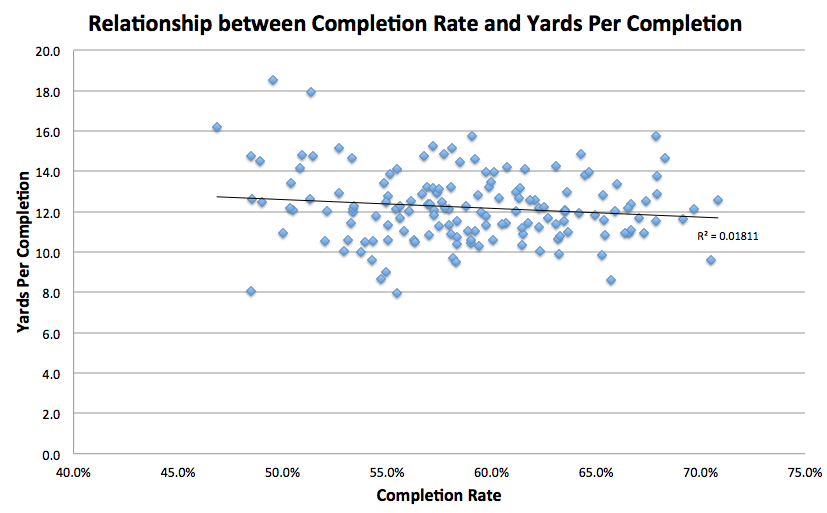 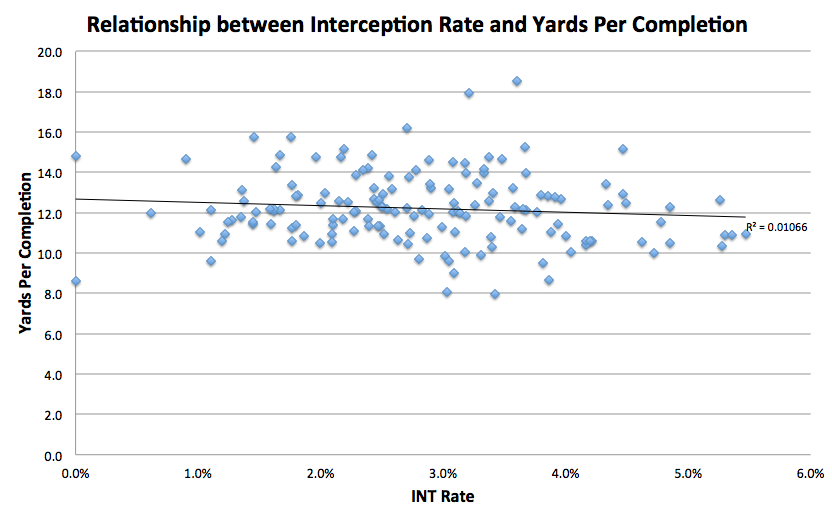 So what does this mean exactly? Well, among other things, quality matters. That's the ultimate "duh," but this suggests that quality and skill matter even more than one would think. You can't really generalize about a QB or a passing game based on merely his per-completion yardage or completion rate.

Of course, this also reminds us of the importance of charting data. A QB could be hitting 65 percent because he's throwing one-third of his passes behind the line of scrimmage, or because he's awesome (or, technically, both). There's an obvious correlation between the distance of passes and completion rate, but I thought more of that would rub off on the box score stats. It doesn't.

That brings me to a different topic: I don't think I'm going to be attempting any full-scale charting project this fall. There are a few reasons for this:

2. Nobody's really using the data. We had some issues pulling last season's charting data together into one giant file for use, but people weren't using the data anyway. The goal was to have a giant data set available for people to use, but nobody really used the 2013 version. That certainly dampens motivation to do it again.

3. Pro Football Focus does it much, much better than we could anyway. They pay charters, they undergo more detailed charting, and they began doing college games last year. It costs an exorbitant amount to use their data, which stinks simply from a "some random blogger can't get curious and check something out" perspective, but it makes sense considering the money they make from teams and other media outlets.

So I'm going small-scale in 2015. Intern Chris Brown will still be charting games, and I'll be chatting with others about doing the same. I'll be crafting a Charting Box Score of sorts to use for the week's bigger games, and perhaps that will kindle interest in a more large-scale effort again next season. If you're interested in charting games, drop me a line -- I certainly don't want to stop you, and we still have a pretty good template for doing so. But the effort will be done on a much smaller scale this time around.