Quarterbacks and the passes they throw

Share All sharing options for: Quarterbacks and the passes they throw

So when we began the Charting Project, one of the things I was most excited about was the data regarding the distance of passes. Since so many passes are basically extended handoffs, counting them the same as a deep ball when it comes to completion percentage just seems odd, especially considering how much we lean on completion percentage as a valid measure.

One of the things Stats, LLC, looks at with its charting data is the idea of a "real completion percentage," basically a look at how a quarterback would have done throwing the same passes as everybody else. They have more charting data than we do, but I thought it would be interesting to look into the same idea with our data.

And of course, before we move any further, a perpetual disclaimer: The data below comes only from the games we charted. For some teams -- the Alabamas and LSUs of the world -- we charted almost every game. For others, it was minimal (to see how many games we charted for each team, go here). That, and not everybody has the same receiving corps. Obviously. In this case, the data below should be used more for conversation than bold, concrete conclusions.

(Actually, in most cases that is how it should be.)

First things first: Who's throwing what kind of passes? Below is a table that shows us the frequency with which each quarterback threw passes with distances of five-yard increments (click on it to enlarge). In other words, it's the percentage of time you threw a pass behind the line of scrimmage, 0-4 yards from the line of scrimmage, et cetera. As one would expect, West Virginia's Geno Smith threw a ton of passes behind the line while others were more based on downfield passing. 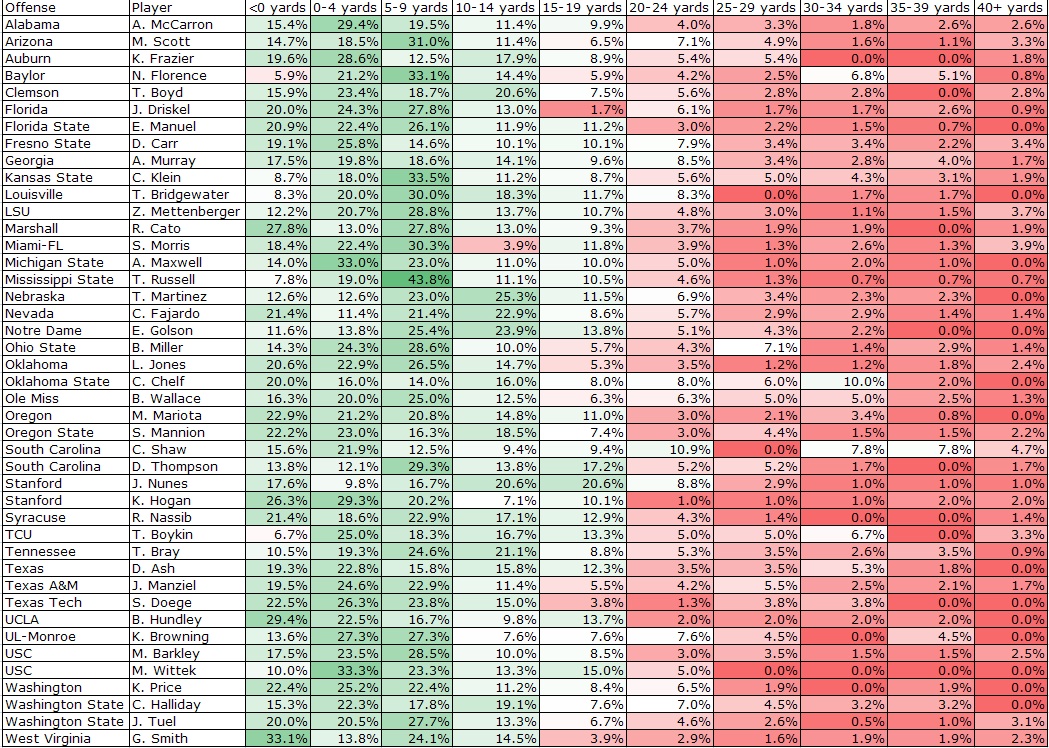 So this tells us a little bit about the personality of different teams' passing games. West Virginia's Air Raid throws 71 percent of its passes within 10 yards of the line of scrimmage, while Washington State's throws about 62 percent that distance. The Clemson spread looks downfield a bit more (34 percent of Tajh Boyd's passes were between 10 and 24 yards downfield), while Baylor loves the 5-9 yard routes. With Conner Shaw in the game, South Carolina goes either very short or very long; with Dylan Thompson, there's a lot more intermediate passing. Now let's look at who's actually completing the passes they are throwing.

Here's a look at these quarterbacks' completion rates for passes of certain distances. The color code is this: for each yardage range (<0 yards, 0-4 yards, etc.), the numbers in green are on the higher end, and the numbers in red are on the lower end. So basically, if a quarterback's percentages are mostly green, that means he is mostly above the norm in his completion rates for certain distances. Red, then, means the opposite. (The blank spaces mean we charted fewer than three passes, if any, of that length for the given passer.) 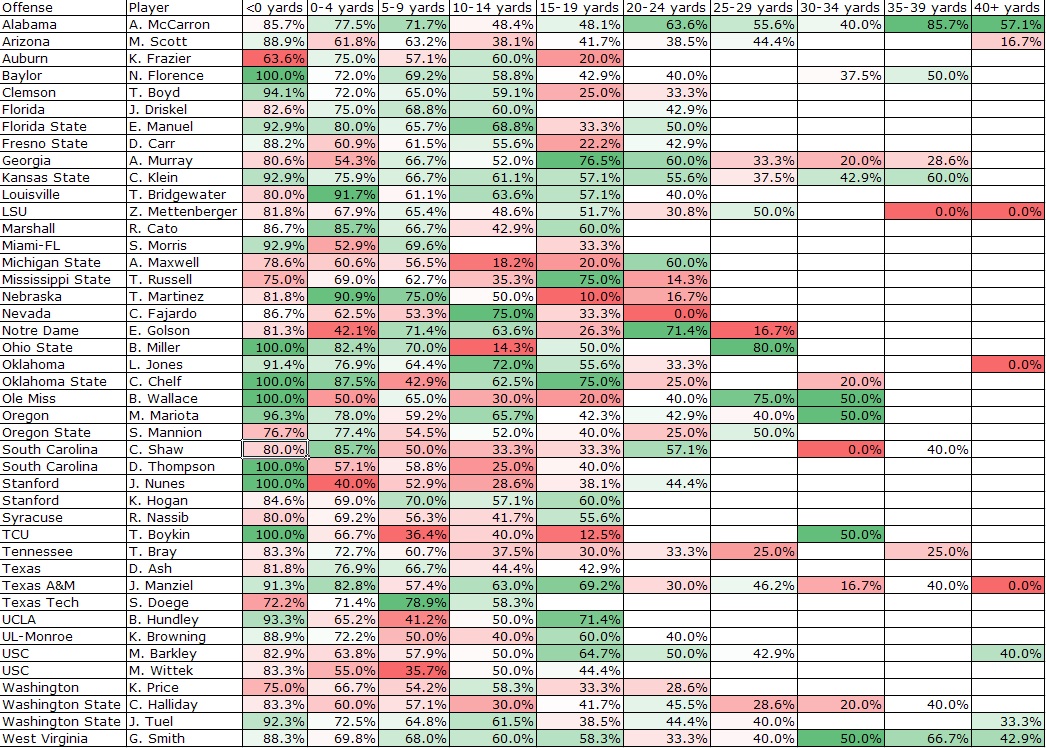 That Teddy Bridgewater is awesome and Andrew Maxwell very much is not ... this is not a surprise. But seriously, what do we make of Collin Klein at this point? He isn't the quickest decision maker, he doesn't have a quick release, and he takes a lot of sacks in the pocket; but he is unafraid to step into the pocket and make throws, and ... he completes passes. With all applicable context involved (yes, defenses were more concerned with the run than the pass against Kansas State, and yes, this sample features some bad defenses like West Virginia's), Klein completed passes at a really high rate, and he did so without an Amari Cooper or Marqise Lee. And, of course, we know he can run the zone read that NFL offenses are finally discovering.

Another fun aspect of this list: look at the bunching. Manuel, McCarron, Florence, Mariota, Manziel, Smith and Jones are all within two percent of each other, and then there is a bit of a cascade down toward the middle, where Barkley, Ash, Mannion, Murray, Nassib, Mettenberger, Doege and Hundley are also bunched together.

Charting data allows us to evaluate a passer while stripping away some of the context that clouds the normal passing data. The plan for 2013 will be to chart many, many more games and get a broader sense for how quarterbacks perform within their chosen offense. But even this data-limited look tells us some things we might not have already known.