Part of the goal of sharing the 2013 charting data earlier this week was to motivate others to dive into the data and see what they can find. But I'm still going to play, too, and I figure the easiest place to start is a general "What did college football look like in 2013?" post.

Share All sharing options for: College football in 2013 (through the eyes of the 2013 Charting Project)

Of the approximately 30,000 plays charted by volunteers and Intern Chris... 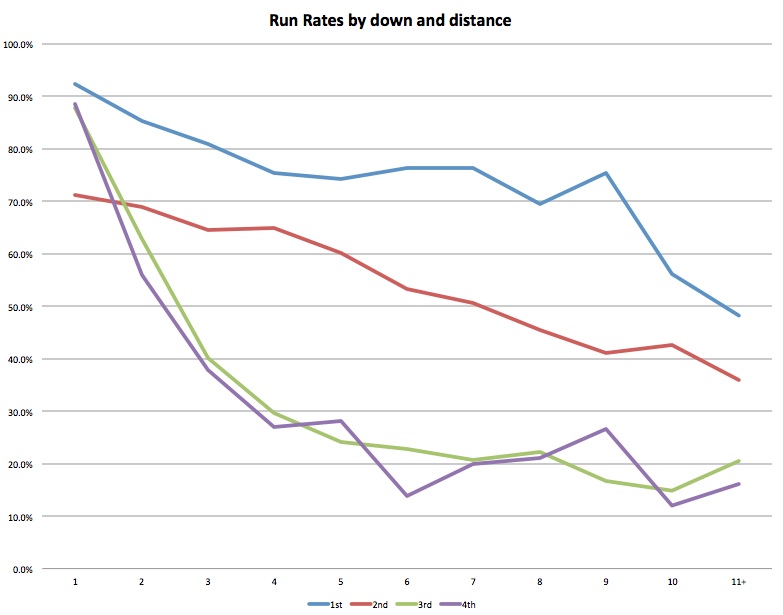 I find it fun that first and second down work in linear fashion -- with run rates falling as the distance to go increases, obviously -- while third and fourth downs almost work as a polynomial function. 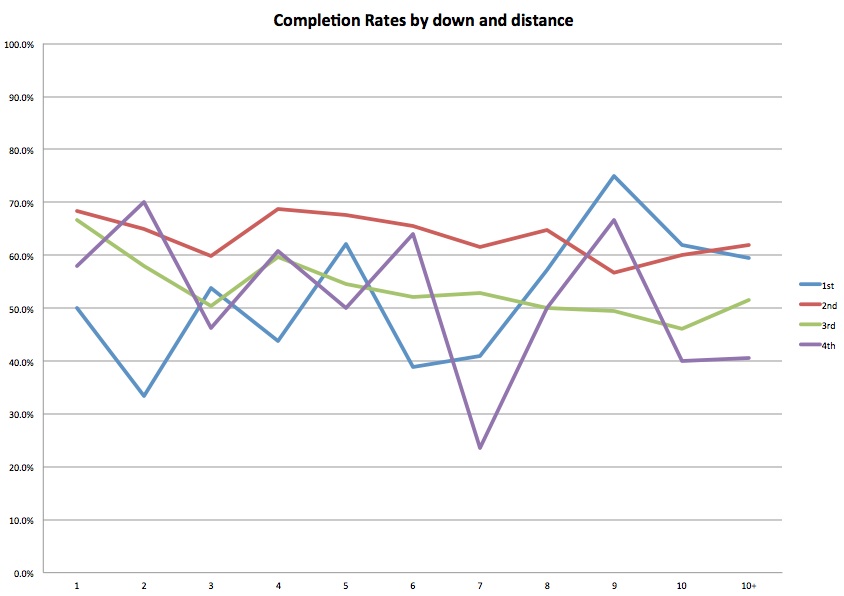 Not as much diversity here as I'd have expected, though because of the small sample of first-and-anything-less-than-10 situations (and the high probability that they're happening near the goal line) make the inclusion of first downs here kind of silly. 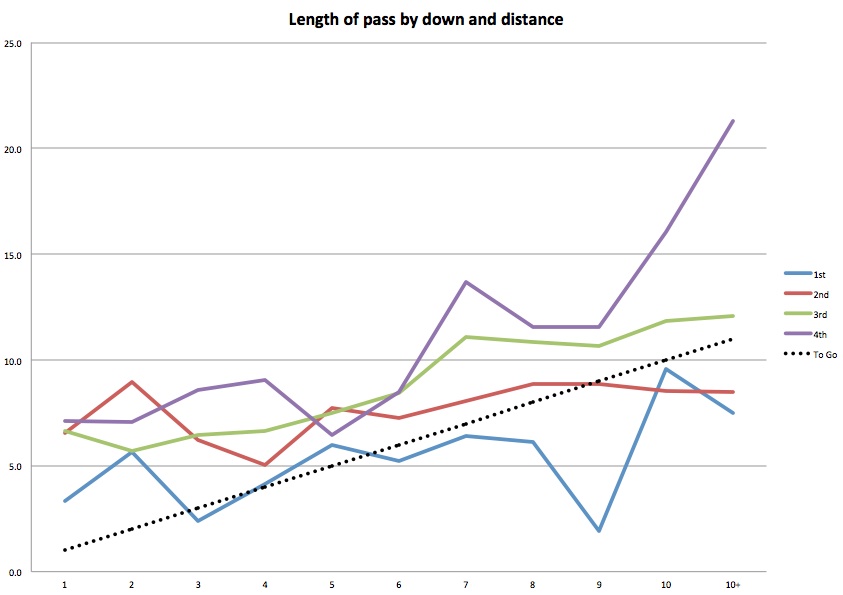 As shared on Twitter. Obviously deep balls skew averages quite a bit here. The average passes here are quite a bit higher than the medians.

Another unexpected one. I assumed that when teams were lined up on the right hash, they'd run left more frequently than when they're on the left hash (and vice versa). If you look at the rushes off left or right end, you do see that they're slightly more frequent coming from the opposite hash, but only slightly. And if they're looking to run between the tackles, ball placement doesn't seem to matter. 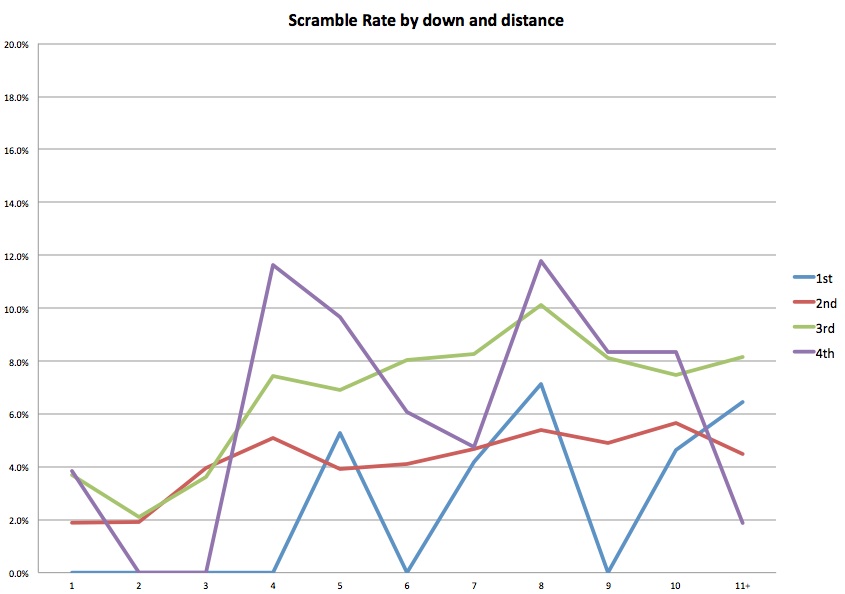 I was curious when and how frequently scrambling happened, so I created a "Scramble Rate" measure. It's basically Scrambles / (Scrambles + Passes + Sacks). Obviously a scramble can lead to a sack, too, but this made the most sense to me based on how these plays were charted.

The verdict: QBs tend to save their scrambling for third and fourth downs, particularly with four or more yards to go. This is what common sense would suggest. First of all, this is when defenses are more likely to blitz. Second, a quarterback is probably going to be more willing to sacrifice his body in a "gotta move the chains on this play" situation. 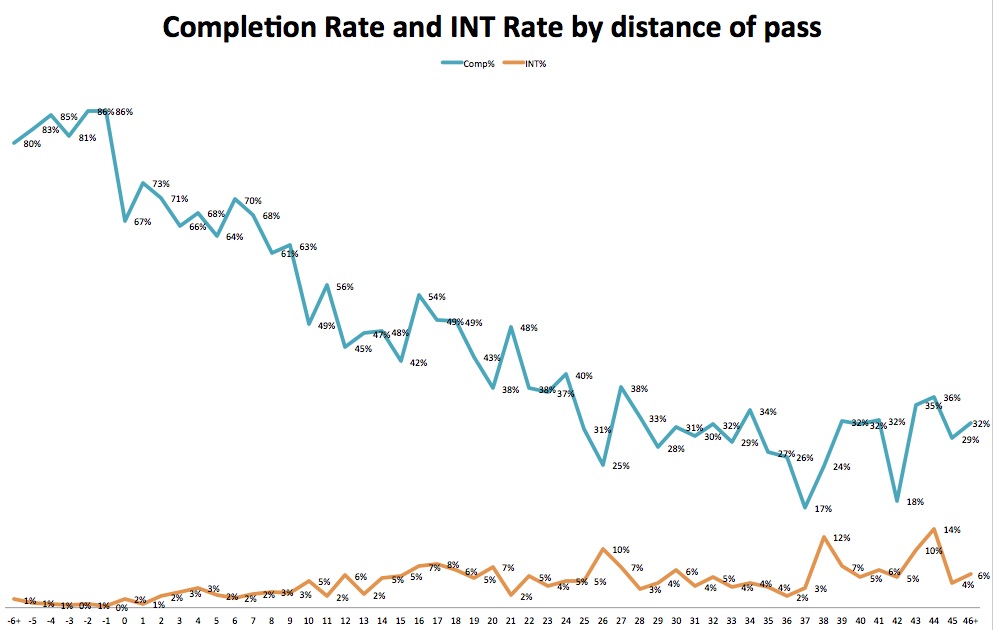 Also shared on Twitter. Passes to a target behind the line of scrimmage are going to be complete more than 80% of the time with minimal interception risk (unless...), and passes thrown one to five yards downfield are going to be in the 70% completion range with about a 2% interception risk. Between about seven and nine yards, completion rates drop pretty dramatically, and interception rates creep up closer to five percent. And on balls thrown more than about 35 yards, it's almost a jump ball.