Share All sharing options for: Penalties and defensive performance

According to the February edition of ESPN The Magazine, the Seahawks "led the league in both penalties (1,183 total yards) and total defense (273.6 ypg). The connection is no coincidence. In the past decade, the most penalized pass defenses (holding and PIs) all have one thing in common: winning records."

ESPN argues here that there’s a positive relationship between total penalty yards and total defense, going on to suggest that teams are incentivized to risk penalties on every play — and specifically the big penalties, like holding and interfering — because refs are unlikely to throw a flag on every down. The potential competitive advantage from holding or interfering is simply too great and the risk of punishment too low to deter some teams in the NFL.

While the ESPN article doesn’t go deep into the data, they suggest that it’s not an accident that the Seahawks led the league in penalties and defense. Instead, the Super Bowl champs are indicative of a positive and robust statistical relationship between penalties and total defense (and presumably, winning percentage). 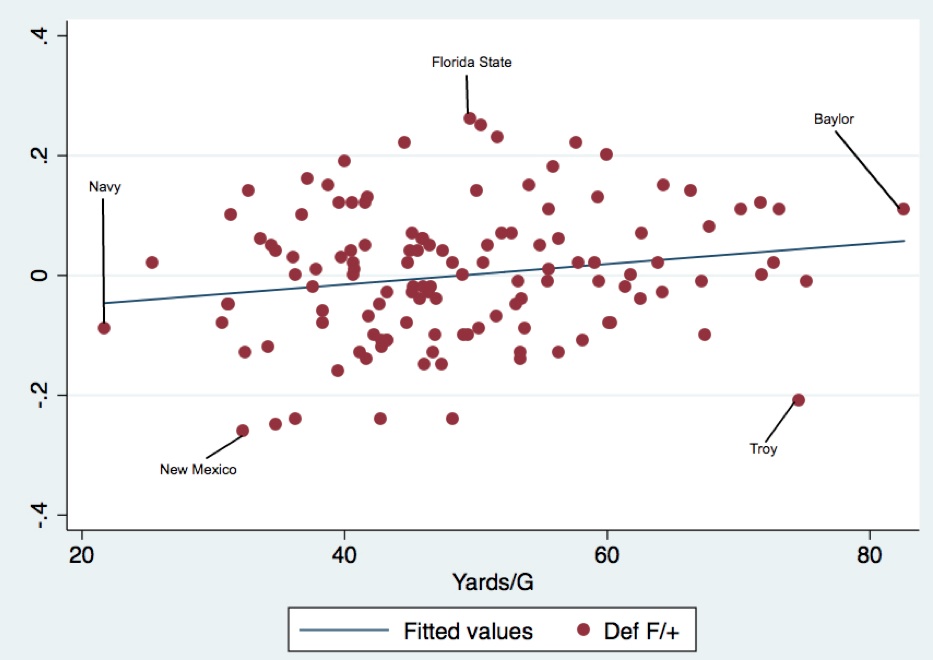 With a correlation coefficient of .0017 (significant at a 95% confidence interval), the more penalized also have higher defensive F/+ scores. This is obviously a rough cut. Isolating defensive penalties would be a good place to go next, and the context for a penalty certainly matters too.

Of the above teams, Baylor, New Mexico, and Navy illustrate the trend the best. Baylor led the country in penalty yards per game while possessing an above average defense; Navy—and New Mexico even more—were below-average teams defensively and among the least penalized. Baylor averaged 9.1 yards per penalty (one of the highest averages last season), indicating that not only was Baylor frequently penalized (almost four times as many as Navy!), but its penalties were typically more costly. Troy, on the other hand, was both heavily penalized and a terrible defense—the worst combination.