Share All sharing options for: Risk Acceptance in the BCS National Championship Game

Last week I argued how prospect theory might apply to coaching decision making when offenses are backed up inside their own five yard line.

The BCS National Championship Game featured four plays inside an offense’s five yard line, and all belonged to FSU. While FSU came into the game with one of the top FEI Field Position ratings in the country, Auburn had much better starting field position and opponent starting field position for the entire night. In fact, FSU’s second possession of the first half started (and did not advance beyond) their own two yard line, while their final possession of the third quarter began on their four yard line.

I went back and reviewed the film for the four plays that FSU ran inside their five yard line to get a sense for whether or not the poor field position increased Fisher’s risk acceptance and whether Auburn’s defensive coordinator Ellis Johnson became more risk averse.

From prospect theory, we would expect that an offensive coordinator would be more likely to accept an unhealthy amount of risk because he is likely framing his choice of play call around the 95 or more yards to go for a touchdown, the potential for a safety, and the risk of an easy pick-six. Conversely, a defensive coordinator in that situation is likely risk averse, consequently calling plays that are geared toward preventing explosive plays rather than trying for an interception or a sack.

After kicking a field goal on their opening possession, Auburn’s punt team did a fantastic job pinning Jameis and the offense on their own two yard line. The FSU offense then ran two low-risk passes and one conservative run up center of the formation for what would become a three-and-out. Even including the low-percentage pass on third and ten, all three calls carried minimal risk for the offense.

On first and ten, the Seminoles operate out of a three wide shotgun look that mitigates risk by putting Jameis in the gun and prepared to easily recognize and scramble away from blitzers. The call is an all-curl, which carries fairly low risk and a high completion percentage. Their most conservative play call is on second down, with a standard inside zone to James Wilder, Jr. for no gain. 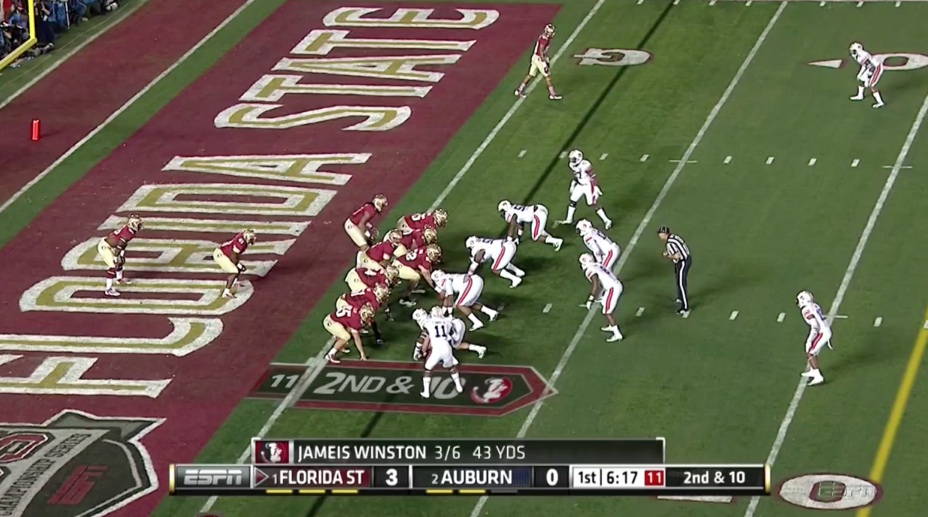 On third down however, Jameis lines up again in the shotgun, but is flanked by his fullback Abram and the running back Karlos Williams. The call is for a more low-percentage (though still fairly low-risk) intermediate pass that falls incomplete, but had Abram and Williams stay inside to block before releasing as secondary reads for Jameis. Fisher anticipates an Auburn blitz that does not come; by lining up Abrams and Williams next to Jameis to block, Jimbo mitigates the risk of a sack from an unblocked edge rusher.

This play calling runs counter to what we’d expect if field position entirely determines a coach’s gains or losses frame. Instead of calling all low-percentage, high risk but high reward plays, the Florida State offense operates out of its base offensive play set with calls that manage the risk of a negative play extremely effectively. I believe that this is because of other factors — namely the time left in the game and the score — that muddle the play calling frame. Though certainly operating with poor field position, Jimbo does not see this as a pure loss. There is plenty of time left on the clock and FSU has the early lead, so the choice of play calling is not in a losses frame.

Likewise, Auburn’s Ellis Johnson does not show any signs of play calling biased by field position. He plays basic cover-2 with an extra edge rusher on first down, then puts seven in the box against the run on second down. Finally, the Auburn defense shows blitz but then drops into zone coverage with the linebackers sitting on the first down line on third down.

Florida State’s circumstances changed significantly in their only other play within the five yard line. After  an Auburn barrage of points in the second quarter, FSU was slowly crawling out of the 11 point hole that it entered halftime with.

As the third quarter drew to a close, Auburn again pinned FSU within its own five yard line. The Seminoles were down by eight and the offense’s previous three possessions included a three-and-out and a fumble. With 96 yards for a touchdown, FSU’s position - and likely the way Fisher framed the play calling - differed from the second possession of the game. It was not quite do-or-die time yet (that would be their final drive of the game), but it was important to at least flip the field on this possession. 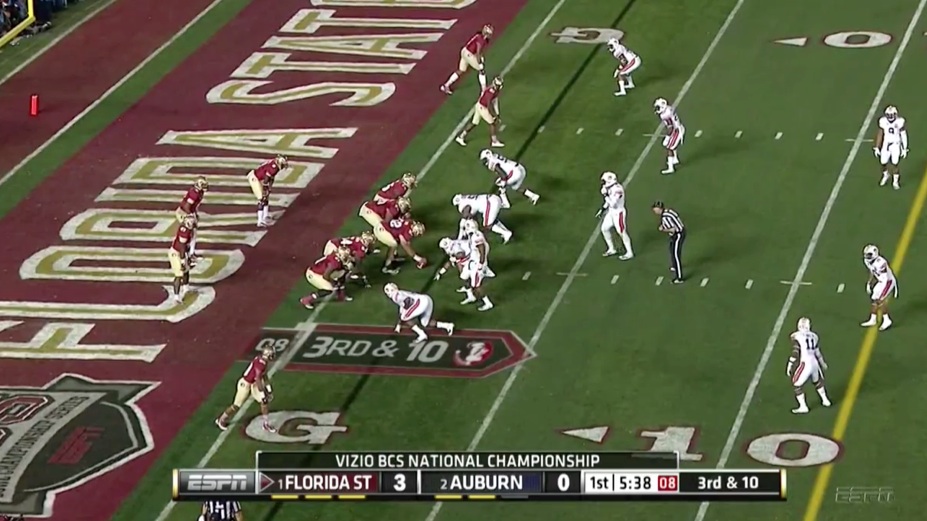 It would only take one play for the FSU offense to get out of their field position hole. With three wide, Jameis threw an easy out route to Greene, who sat in an open spot of Auburn’s zone. Greene’s route boxed the corner out, who never took his eyes off of Jameis. The call wasn’t extremely risky, but it was clear that the Seminole offense was not content to take another three and out. The offensive play calling  shifted to attack the open zones in Auburn’s defense.

These four play calls are more illustrative of prospect theory’s hypotheses than they are for testing those hypotheses, but they do suggest that coordinators’ frames are determined by more than just field position — the overall pace of the game, the success of the previous few possessions, and the score seem to impact how aggressive or not an offense is willing to be within their own five yard line.

Finally, it’s important to note that an increased willingness to accept risk in play calling can be rational, so it’s important to distinguish between rational and irrational aggressiveness and passiveness in play calling when looking for examples of prospect theory in action. While it’s clear to me that Jimbo was more aggressive with his play calling in the last example, it was certainly not an irrational call — the call would have made since even with good field position and the lead. Instead, his fake punt while down by 18 points might be a better candidate for risk acceptance in the domain of losses.