College football's best conferences and their ups and downs

A look at "up years" and "down years" for FBS conferences.

Share All sharing options for: College football's best conferences and their ups and downs

Every conference has its ups and downs. It's common for fans or analysts to mention that a conference is having an "up year" or a "down year". But what does that really mean? Not all "down years" are created equal. A down year in the SEC, for example, probably still means that the conference is among the strongest in college football. Meanwhile, a down year in the ACC might mean that only one or two teams are relevant in the national conversation.

As we are wont to do here at Football Study Hall, I thought it would be best to put this to the numbers. Using the F/+ rating for every team in every conference from 2005 to current, I calculated the average F/+ rating for each conference by year. I used a simple average, although I considered giving a higher weighting to the best teams in each conference (thoughts on this, readers?).

First, let's look at the best six conferences in college football for each year from 2005 to current:

Note: you can click on any of these images to make them easier to read

You have to go all the way back to 2005 to find a season where the SEC didn't rule college football -- this also happens to be the last season that a team from outside the SEC won the BCS title game.

Let's take a look at each major conference:

Obviously the SEC has had an incredible run at the top of the college football world, with seven consecutive years at No. 1 with another likely on the way. The Big 12, though, has also been very stable near the top, never finishing lower than fourth. This season looks to be a down year in the Big 12, with no real national title contender. F/+ agrees, placing the average Big 12 rating at its lowest point since the 2006 season when only two teams finished in the final top 25.

The now-defunct Big East came in third in the average rankings over this time period, with a highlight year in 2007 when three teams finished in the F/+ top 15 (West Virginia, South Florida, Cincinnati).

The Big 10's best season was the weakest #1 average ranking in this study, but the conference has been steady with all top-four finishes since 2008.

The Pac 12 had the best season by any conference outside of the SEC in 2007 (USC and Oregon were outstanding, and all 10 teams were ranked #66 or better). The conference is the only threat to the SEC this year, and it looks like it might be a very tight race for top billing in 2013.

How about an Olympic-style medal count? 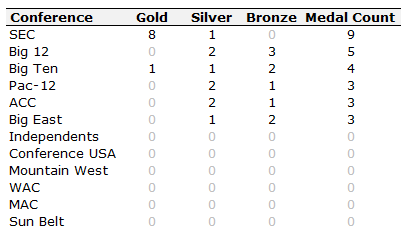 Let's take a closer look at the major conferences to see how things can vary from season to season. 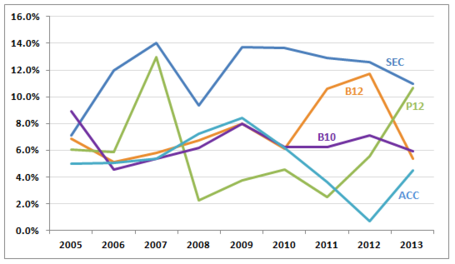 Finally, how about this season? The SEC appears to be a little down relative to their incredible recent history. Its current average rating, 11.0%, is the lowest since 2008. The Pac 12, having its best season since 2007, is the only legitimate challenger to the SEC this year. After that, it's a bit of a disaster. The Big 10 is at its worst level since 2009. The Big 12 is at its worst level since 2006. Still, it's way too early to call it -- the F/+ numbers will be drastically different for many teams at the end of this season. College football combines small sample sizes with 20-year-olds to make fools out of those of us who try to make sense of it with a spreadsheet.

Whether your team or conference is up or down this year, enjoy the football weekend.