Seemingly lost in the "Kick Six" on Rivalry Saturday was the thrilling end to The Game, which saw Michigan unsuccessfully attempt a two-point conversion in the final seconds with the game on the line.

Up until that point, Michigan offensive coordinator Al Borges had called undoubtedly his best game of the season against Luke Fickell and Everett Withers’ defense. With a variety of backside screens, misdirections, and short passes, Michigan ran effective throwback and tunnel screens on Ohio State’s defense.

I think Michigan’s play-call on the two point conversion attempt deserves a more in-depth look, not just because it was the play of the game, but because it’s an opportunity to explore the theory behind stacking wide receivers. 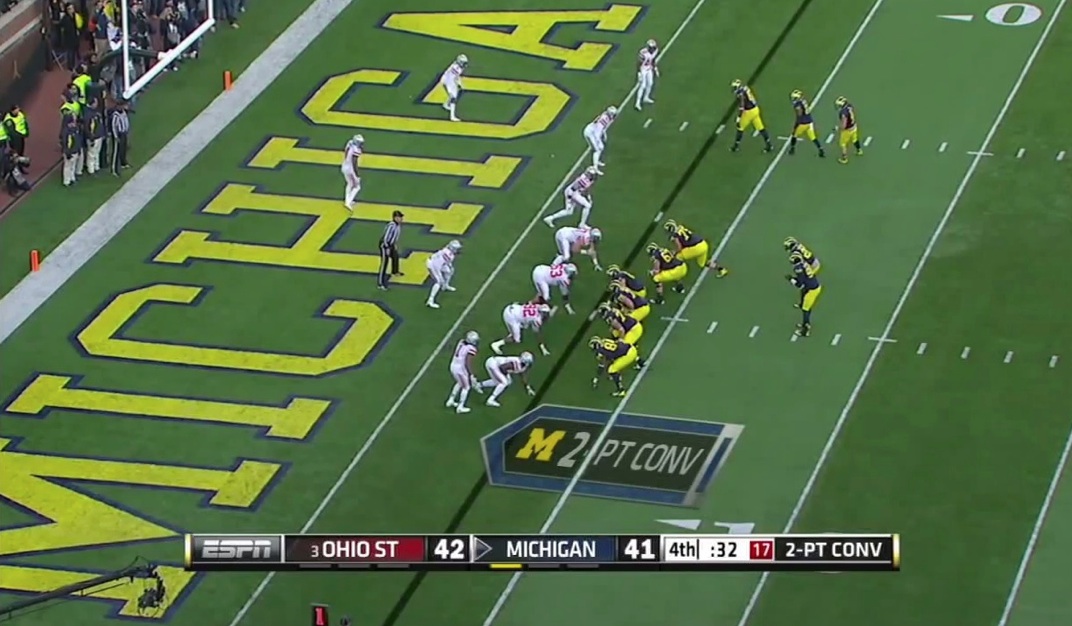 With the ball on the left hash, Michigan stacked three receivers (Gallon, Funchess, and Dileo) on the field side.

Stacking three receivers is in many ways a variation on the bunch trips look. As Andrew Coverdale and Dan Robinson describe in their theory of bunch sets, bunch formations offer offenses several advantages. Condensing, rather than spreading out the receivers, can somewhat conversely open space on the perimeter by allowing room on the outside for receivers to outrun defenders to a spot, while leaving space on the edge for opportunities after the catch.

Most importantly, bunch sets can beat man and man under coverages because of the natural picks created by compacted wide receivers running precise routes in a tight area. Receivers can run timing routes with almost zero space between them (best exemplified by the "mesh" pattern), thereby forcing defenders to run around them.

Stacking wide receivers plays off of another of the bunch formation’s strengths - eliminating, and exploiting, defenders’ pattern recognition. As Coverdale and Robinson describe, "The thing that stops successful passing the most, whether against pattern-read defenses or not, is pattern recognition…Because many of the throws are timed to spots in zones, full recognition and reaction in time to make a play is a more difficult prospect." In fact, in the two-point conversion attempt in The Game, the three receivers run what looks initially like the exact same route, forcing the defenders to play off of what initially appear to be identical routes. Defenders must read the receivers after the play develops, confusing responsibilities for zone defenses and creating natural picks for secondaries in man coverage.

The advantages of the stack formation are multiplied by the triangle route combination, which combines a vertical route with snag and flat routes to give quarterbacks both vertical and horizontal options no matter what coverages the defense runs.

Stacking receivers isn’t new for Michigan, and the triangle route combination has used extensively across all levels of football for years. However, the stack has value in furthering more traditional bunch formation advantages: beating pattern-recognition, disguising routes, creating natural picks, and creating space and leverage on the wide side of the field.

However, defenses that effectively prepare for the stack and triangle route combination roll their coverages toward the field side, placing more defenders than there are receivers, disguising their coverages, and then stepping in to underneath throwing lanes.