Conventional Wisdom be Damned: The Math Behind Pulaski Academy's Offense

There's sound math behind Pulaski Academy's commitment to never punting. But it takes a special kind of coach to deal with the criticism that accompanies a decision to buck conventional wisdom.

Share All sharing options for: Conventional Wisdom be Damned: The Math Behind Pulaski Academy's Offense

Have you seen this video about Pulaski Academy? It’s a private school in Little Rock, AR with a coach who has a unique approach to offense. Kevin Kelley, Pulaski’s coach never, ever punts, and he almost always attempts onside kicks after scoring.

The numbers back up Kelley’s conviction that his offense is correct. In fact, two numbers in particular stand behind it: 10-0. That’s Pulaski’s record as of last weekend.

Let’s dig into some of the other numbers underwriting his never-punt approach to coaching.

When faced with a fourth down, there are four numbers that should influence the decision: 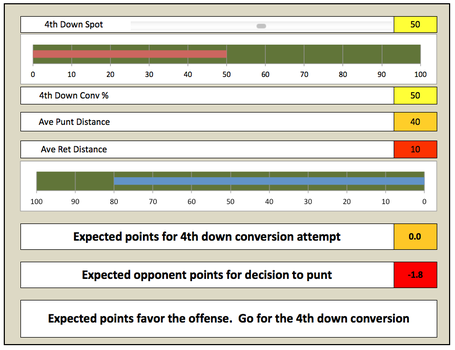 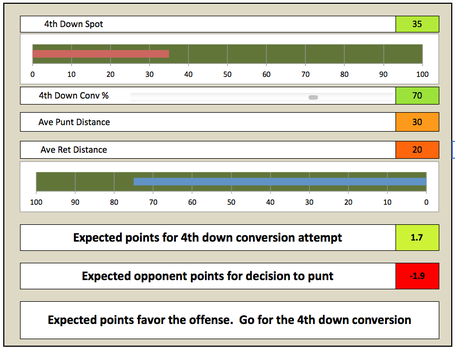 In this scenario, the fourth-down spot is the 35-yard line and the distance to go is more favorable, so the estimated P(conv) is 0.70. The average punt is 30 yards and the average opponent punt return is 20 yards. In this case, the expected points of going for it on fourth down is 1.7, and the expected opponent points after a punt is minus-1.9. That's an expected point swing of 3.6 points. Not bad. 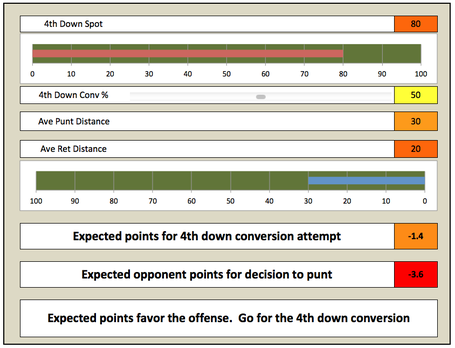 In this scenario the conventional wisdom is to always punt. The fourth-down spot is on the offense's own 20-yard line. The P(conv) is lower at 0.50, and the average punt and average returns are the same as the last example. In this case, the expected points is negative regardless of what choice is made. However, the expected points from going for it on fourth down are still greater than the expected opponent points after punting.

Conventional wisdom is wrong. Kelley and the entire Pulaski Academy football team know it, and they're using it to win football games.

If you want to play around with the decision tool I screen-shot, you can download it from my dropbox.

I don't think this kind of analysis would be a surprise to any decent coach. So, why do coaches "play it safe" (as if it weren't safer to make the choice to score more points)?

The answer to that, I think, lies in the way that we view errors of commission versus errors of omission. Or in other words, a coach that makes a choice to punt the ball from the 20-yard line would be viewed as making sound decisions, whereas one that chooses to go for it on the 20-yard line is considered a risk-taker. If the decision to punt turns out to be the decision that gives the ball back and the opponent then scores a TD, then the decision to punt is hardly considered as part of the evaluation of the sequence of events. If the decision to go for it fails and the opponent scores a TD, then the decision will be second-guessed ad nauseum. The result of both decisions is the same, but one would be criticized much more harshly than the other.