Who is the college version of Alex Smith?

Share All sharing options for: Who is the college version of Alex Smith?

This all was sparked by a Football Outsiders writers’ tweet:

The best QBs tend to throw beyond the sticks on 3rd down. Alex Smith is playing his own sport. pic.twitter.com/jOFjFGjoqY

Even without knowing anything about this graph, or football, or sports, or… anything really, you can look at it for five seconds and think, "Who the heck is Alex Smith, and what is he doing?"

What the graph shows the average difference between the distance of a quarterback's third-down passes (as measured by how far it travels in the air) versus the yards to go. It is measuring who actually throws the ball past the sticks.

That is astounding. Scott was right -- it is as if Alex Smith is playing a different sport. It's as if getting a first down is the least of his concerns. Anecdotally, this writer is a Browns fan (which, yes, has led to emotional scarring) and thinks Brady Quinn could rival Alex Smith on this stat were it to go further back than 2012.

This tweet led me to wonder if there were any college players in the same universe as Alex Smith on throwing short on 3rd down. I also wondered if college Alex Smith is in NFL Alex Smith's universe (Alas! the dataset goes back to 2005 - Smith's first year in the NFL).

Here's the rub: without complete charting data, we don't have the distance the ball was thrown (or the yards after catch that followed), so we're left to compare quarterbacks' yards per attempt (YPA) or yards per completion (YPC). I think either way it will still be a decent look at how far NCAA quarterbacks are throwing beyond the first-down marker. If not, it will at least be a representation of who is performing well on third downs.

Here is a plot of every quarterback in the dataset with at least 40 third-down pass attempts in a season going back to 2005. Below it, the names are included. You can't see much in the middle, but you can see the players that are really bad or really good, which is fun.

The green line on the plots is the "break-even" mark, players above the line averaged more yards per attempt than yards to go on third down. The black line is the NCAA average, players above are better than average and players below are worse. 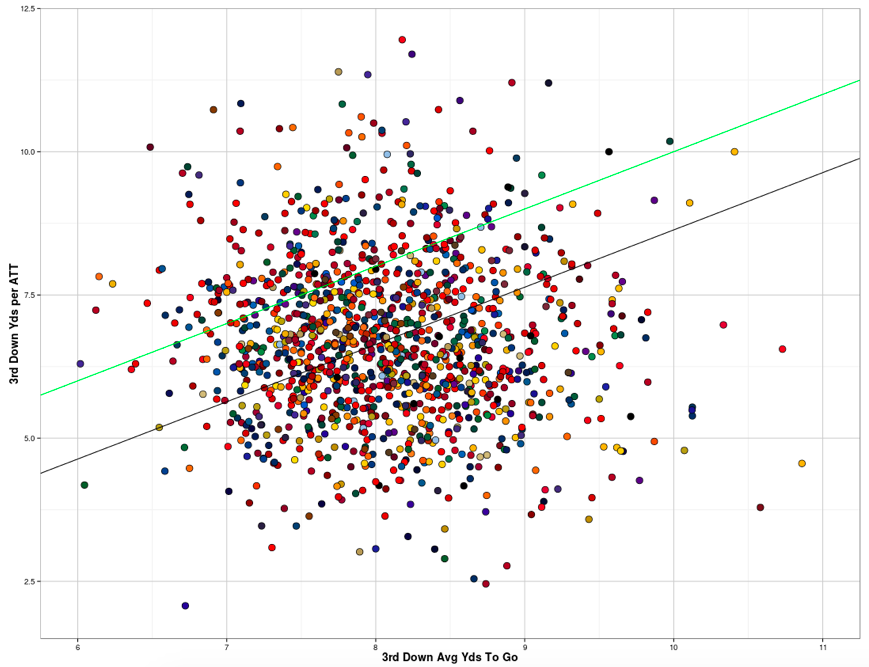 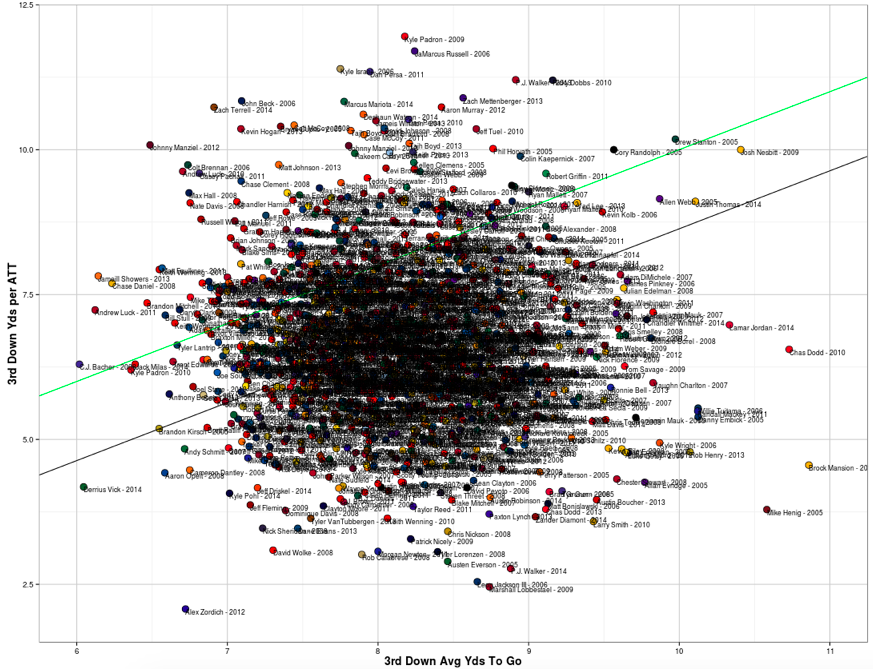 A couple things stand out right away. JaMarcus Russell circa 2006 was really good! Andrew Luck and Stanford stayed on schedule on offense in 2011 (their average yards to go were quite low, at least when they were passing). Deshaun Watson and Marcus Mariota were excellent on third down last year.

Let's look at a different set of quarterbacks: those from 2015's top five teams heading into the season: Ohio State, TCU, Alabama, Baylor, and Michigan State. 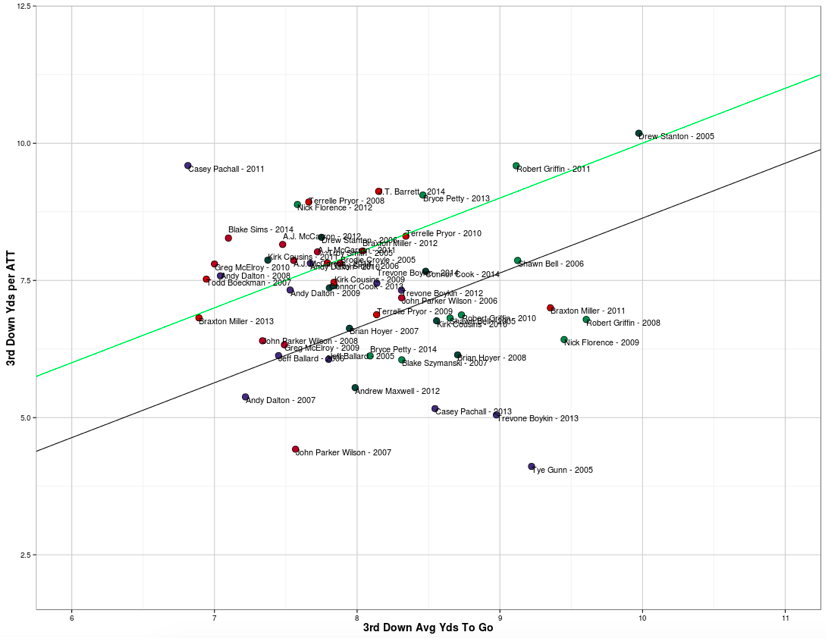 I've deployed a Shiny app that contains all the data and allows you view the plots (YPA vs Yds to Go and YPC vs Yds to Go) with filters by team, conference, and/or season. Go here to check it out. 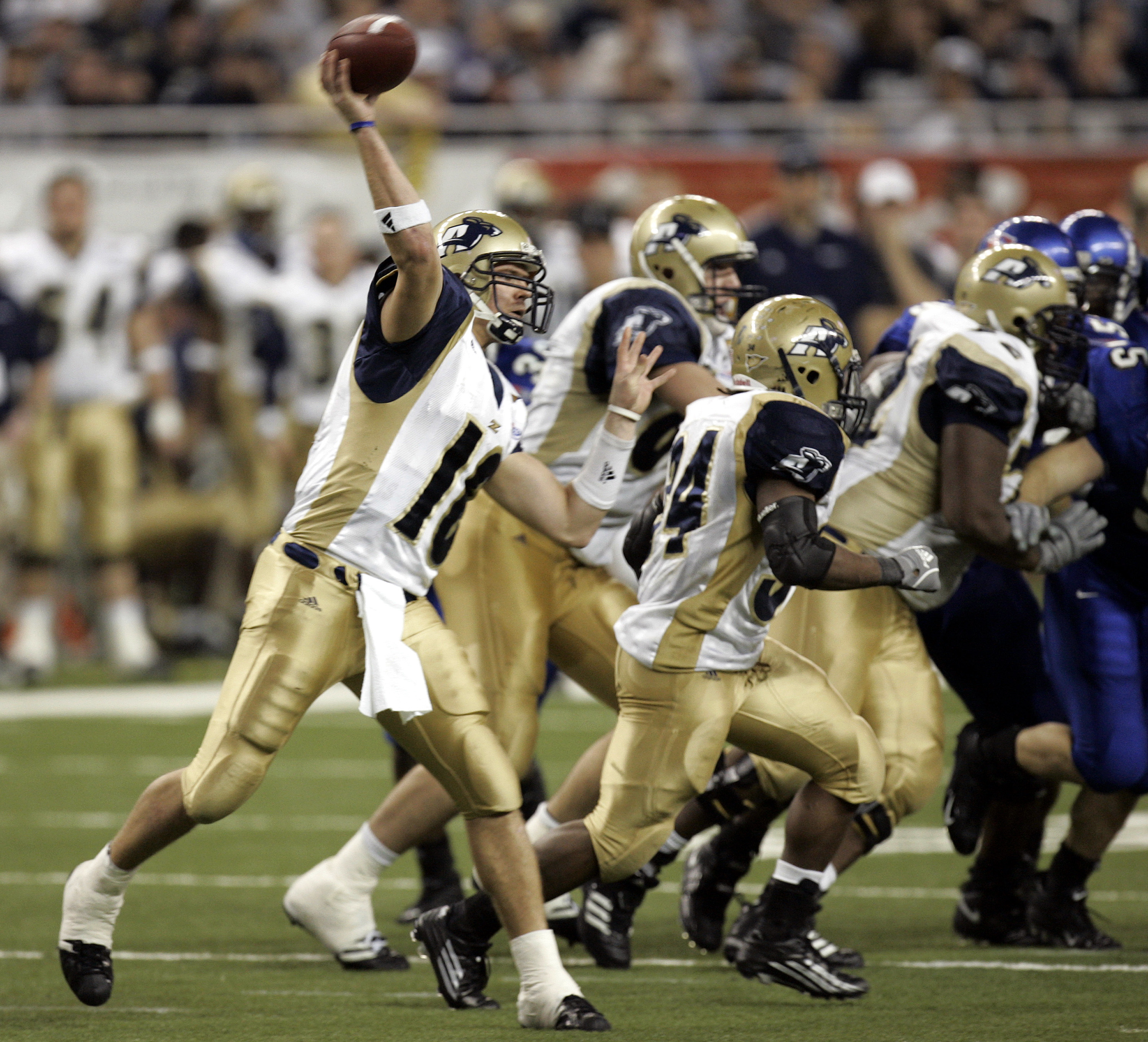 That’s still not nearly as many standard deviations from the mean as Mr. Smith. Alex Smith is in a class by himself.