Mobile quarterbacks often give you higher upside and lower downside

Share All sharing options for: Mobile quarterbacks often give you higher upside and lower downside

Last week, I tested one of my ongoing quarterback assumptions -- that there's a correlation between completion rate and yards per completion -- and found to my surprise that this wasn't necessarily the case.

Today, let's test another one. One pattern I've noticed while going through the process of writing big team previews each offseason is this: mobile quarterbacks take more sacks. That feels true, anyway. Does the data back that up? It does, actually!

To test this out, I basically looked at two things: sack rates (duh) and a given quarterback's ratio of rushes to pass attempts. (I'm including sacks as pass attempts since that's what they are.) For QBs with at least 100 combined rush and pass attempts in 2014, here's what the data looks like (click to enlarge): 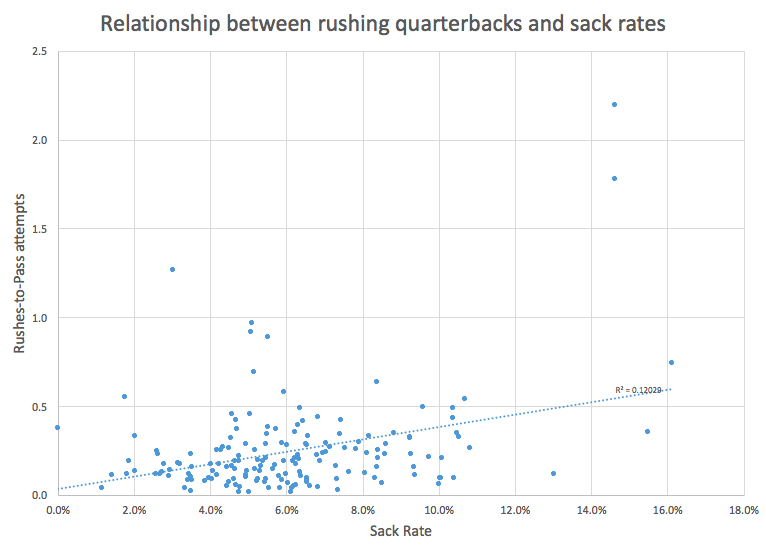 Option quarterbacks make the run-to-pass range pretty large overall. Here are the top 15 quarterbacks (according to rushes-to-passes) and some associated data.

Each of the top six names on this list -- Santiago, Reynolds, Ellison, Jordan, Thomas, and Pearson -- are option quarterbacks, and each had at least 0.89 rushes for every pass attempt. Meanwhile, other players on the list (Thompson, Murphy, Harris, McEvoy, Bell, Hill) are/were known more for their athleticism/running ability than their passing.

But while these option quarterbacks (and their sometimes dramatic sack rates) skewed the data a bit and made the correlation stronger than it otherwise would have (if you remove the six option guys atop this list, the R-squared value in the chart above falls from 12% to 8%), there's still a correlation here.

This makes sense, of course. My theory all along is that mobile guys trust their mobility, and that can backfire. If you are a great runner, you probably ran circles around defenses in high school and were always able to escape the pocket at the last second and do massive damage while scrambling. This can mess with your passer instincts, and it can affect the type of offense your coach attempts to build for you.

The most interesting name on this list, by the way? Cardale Jones. Jones has a magnificent arm, which is what drew all the NFL attention despite his small game sample, but he also ran more frequently than J.T. Barrett, and he did an efficient enough job of it (5.3 yards per non-sack carry, 49 percent of carries going at least five yards) that it opened up ridiculous opportunities for Ezekiel Elliott. Though Elliott had already found a major groove with Barrett (last five games of the regular season: 108 yards per game, 6.8 yards per carry), it might not be a coincidence that he went next-level in the postseason when Jones took over (232 yards per game, 9.2 per carry).

Jones' size and run frequency might have been difference-makers for Elliott. Barrett was more explosive and efficient as a runner, but Jones did it more and did it while carrying a 6'5, 250-pound frame. (Barrett, by the way, nearly made this list as well; his run-to-pass ratio: 0.439.)

I spoke to Houston head coach (and former Ohio State offensive coordinator) Tom Herman recently for my big Game Week coach profile, and here's what he said about rushing quarterbacks:

Just as mobile quarterbacks are likely going to have a certain type of offense built around them, immobile guys (actually, I'll be nice and call them less mobile) are, too. They're more likely to take part in a quick-passing game, one with faster delivery, higher completion rates, and lower yards per completion.

The numbers bear this out. The correlation between rushes-to-passes and sack rates was a solid 0.228, but other correlations were even stronger:

A quarterback who runs a lot is quite likely to take more sacks, complete a lower percentage of passes, run more successfully (duh), and complete more explosive passes. Meanwhile, quarterbacks who never run are throwing more quickly and therefore taking fewer sacks, completing a higher percentage of passes, and averaging fewer yards per completion. None of this is particularly surprising, but the numbers certainly back this up.

Plus and minus, give and take.