Teasing out explosiveness vs. efficiency in receiving stats.

As I did for running back stats last week, I thought it would be interesting to look at the relationship between explosiveness and efficiency in receiving stats. Since I lean on catch rate and yards per catch for a lot of the receiver analysis I use, I'll stick with those here. They're a nice combination -- how frequently you catch the ball and what you do with the catches you make.

I wanted a big sample, so here is the relationship between these two measures for all FBS players with at least 25 targets last year. That's a sample of 714 players. 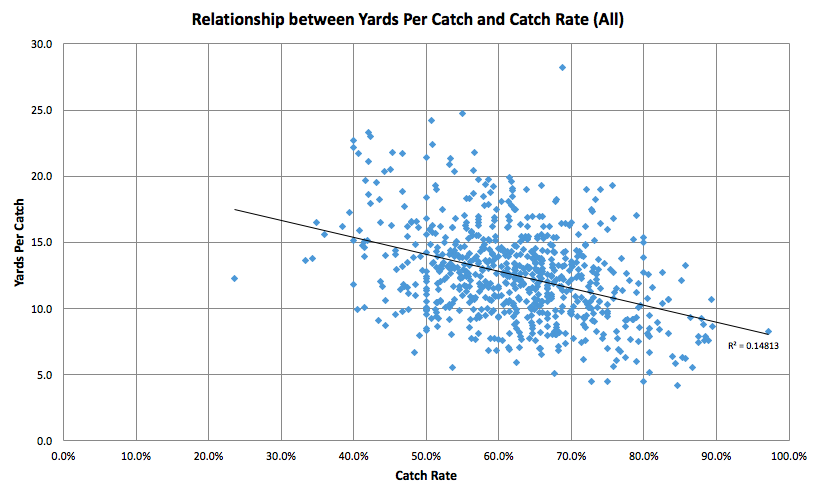 There are quite a few players who appear to overachieve a decent amount in both categories. Here's a sortable list of 2014 players with at least a) 25 targets, b) a 60 percent catch rate, and c) 15 yards per catch. There are 61 in all. Those with at least 75 targets are in bold.

I default sorted in order of catch rate here, and that led me to quickly notice something: there are quite a few interesting returning Pac-12 receivers near the top of the list -- 5 of the top 9 (again, when sorted by catch rate), in fact: Oregon's Pharaoh Brown (a tight end) and Darren Carrington, UCLA's Thomas Duarte, Arizona's Samajie Grant, and Cal's Darius Powe. That's intriguing. Of that fivesome, only Grant was targeted more than 50 times, but thanks to graduation/attrition, all five could play larger roles this year. And Grant and Powe even have the benefit of a returning, experienced quarterback.

Out of curiosity, I wanted to take this same look at standard downs and passing downs. Here's the same sample of players (those with 25+ targets, regardless of down) with their target rate and per-catch averages on only standard downs targets. 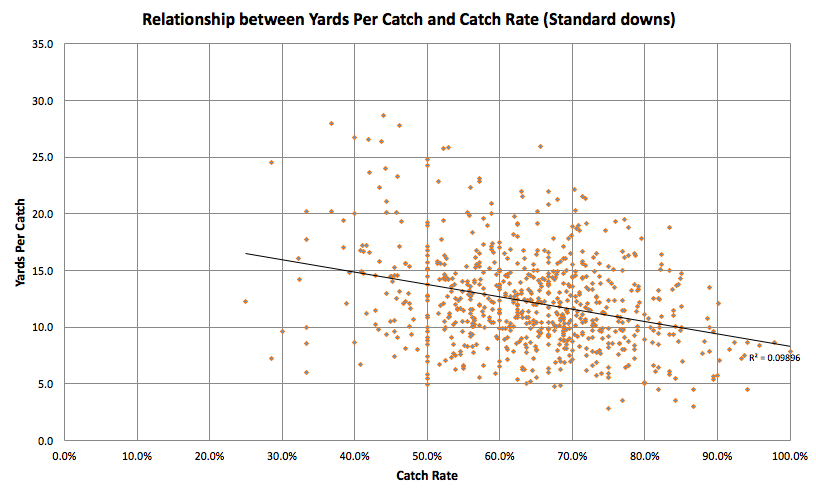 Obviously by stripping down the sample size a bit, you're opening yourself up to a wider array of results. The correlation here isn't amazing, but it's better than in the next chart: 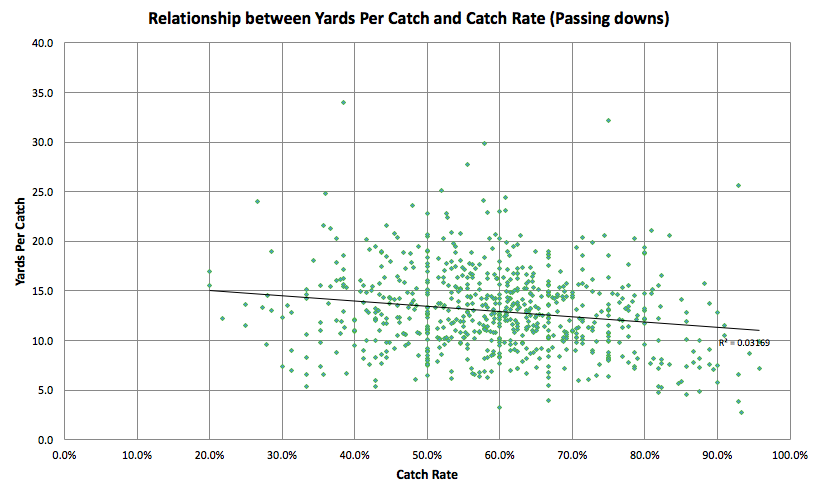 There's almost no correlation between catch rate and yards per catch on passing downs. I've got a theory for why this is, and you can tell me how woefully incorrect I am in comments: for a long time now, I've considered standard downs as game plan downs and passing downs as play-maker downs. On standard downs, the offense has the advantage and can attack the defense in a number of different ways. On passing downs, your options are more limited, and you could be more prone to leaning on your play-makers.

Passing downs would introduce more of a quality variable then. If there were a strong relationship between these two measures, that would suggest that players follow a script in a way, and you take your pick -- high catch rates or big plays. But when there's almost no correlation, that suggests that player quality matters. Good players are capable of high catch rates and huge yards per play; bad players ... aren't.

The lack of correlation on passing downs, combined with the decent overall correlation, in some way vindicates my line of thinking. Well ... it does to me, anyway. I could be missing something.

Anyway, the following 15 players averaged at least 15 yards per catch on passing downs with at least a 70 percent catch rate. It's an interesting mix of known play-makers (Duke Williams, Devin Smith) and breakout candidates (the Pac-12ers mentioned above, plus guys like Edward Pope, Fred Brown, Mike Williams, and, if he hasn't already broken out, Pharoh Cooper).

Cooper's a bad man. More will probably figure that out this season. Meanwhile, C.J. Prosise was a passing downs dynamo last year ... and is fighting for reps at running back this year. Unique.