Explosiveness vs. efficiency in rushing stats (a.k.a. Watch Jhurell Pressley and Matt Breida)

Share All sharing options for: Explosiveness vs. efficiency in rushing stats (a.k.a. Watch Jhurell Pressley and Matt Breida)

Back in February, I posted 2014 college football rushing stats and tinkered with a rushing measure that combined efficiency and explosiveness.

So basically, I'm using two measures, unadjusted for opponent, to get at the heart of a running back's abilities/personality:

Opportunity Rate. This is the percentage of a runner's carries that gain at least five yards. Like, Success Rate, it is a decent measure of efficiency, though it is quite difficult to get at a runner's efficiency without in some way gauging the success and quality of the offensive line blocking for him.

Combine these two measures, and you get a nice look at how frequently a runner was generating big-play opportunities and how big those big plays were. That's the essence of being a good running back, no? Granted, Success Rate would add an extra dimension to the discussion -- namely, how good someone is in shorter-yardage situations -- but we'll ride with this for now and in the 2015 previews.

At that point, I tinkered with a formula that basically multiplied these two numbers together, and it provided you with the following ranking of 2014 power conference running backs:

Certainly not a bad starting point.

I didn't use any sort of multiplier in this year's season previews, however, instead just providing both individual measures and leaving it at that.

Since I recently talked about the relationship between completion rate and yards per completion, however, I thought it might be interesting to do the same for these two measures, since in theory, it provides a similar look at efficiency and explosiveness.

Looking at the running backs who carried at least 75 times a year ago, here's what you get for the relationship: 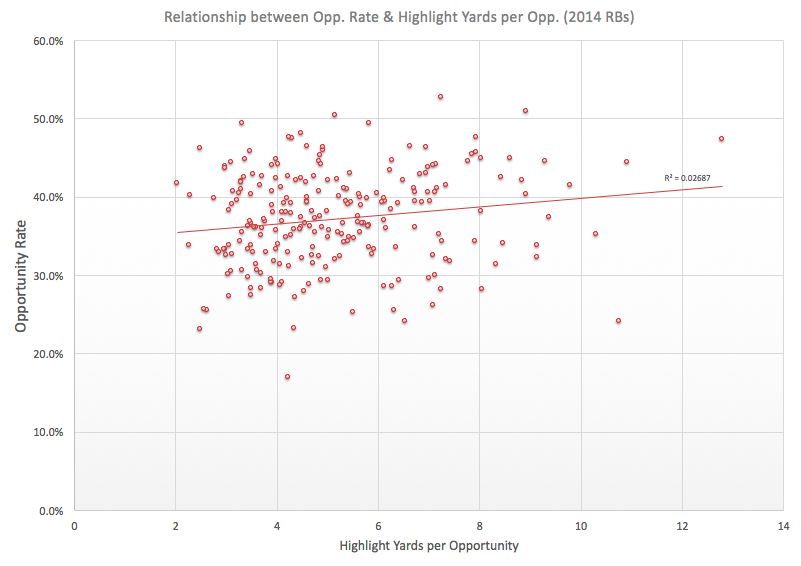 The overall correlation is reasonably weak, but it exists, at least. But it isn't exactly what I expected. In discussing these stats in the preview series, I tended to think of certain guys as efficiency backs (guys with solid opportunity rates and no explosiveness) or all-or-nothing guys (huge highlight yards per opportunity and few opportunities). There are certainly guys who fit the bill in both of those categories...

Again, this is far from earth-shattering stuff. Still, I was curious and thought it was worth sharing.

By the way, if you're wondering about who's in the upper quadrant of that chart above, here are the 40 running backs who had at least a 38 percent opportunity rate and averaged at least 6 highlight yards per opportunity. (Power-conference backs in bold.)

(One more semi-obvious note: these measures are indeed unadjusted for opponent. So a back like Jaylen Walton, who did most of his damage in a small handful of games and otherwise struggled, probably benefits from that.)

In Tevin Coleman and Melvin Gordon, we lost the two most well-rounded, noteworthy backs in the country. But if you get a chance to watch Jhurell Pressley or Matt Breida play (New Mexico plays Arizona State on the Pac-12 Network on Friday, Sept. 18; Georgia Southern starts the season with West Virginia on FSN on Sept. 5), you probably should take advantage of it. Both play in option attacks with exciting option quarterbacks, but still. They're fun. For example: