On college football recruiting rankings, semantics, and a perfect world

Thoughts on college football recruiting rankings, their imperfections, and how they could be improved in the future.

Share All sharing options for: On college football recruiting rankings, semantics, and a perfect world

Two of my favorite colleagues -- Ian Boyd and Bud Elliott -- more or less have polar opposite views when it comes to recruiting rankings and their value. Granted, a lot of it is in the semantics of the argument, but I wanted to share a few thoughts of my own on what is at times a rather prickly offseason topic.

There's a difference between flawed and fatally flawed

If you use nothing but recruiting rankings as a guide, you can come up with a reasonably accurate assessment of who will and won't be good from year to year. Or at least, you'll have a nice starting point for such an assessment. Obviously using only recruiting rankings in 2014 would have left you aiming way too high on teams like Florida and Michigan and way too low on teams like TCU and Oregon. But generally speaking, it'll get you a certain distance down the road.

Where the two camps -- "recruiting rankings are lifeblood" vs. "recruiting rankings are overrated/flawed" -- differ is in the development angle, of course. There are, after all, three pieces to basically any team sport: talent acquisition, talent development, and talent deployment. The middle is the toughest to talk about because, among other things, it involves things we can't see.

Recruiting and recruiting rankings tell us about the acquisition portion, and stats and our own eyeballs tell us about deployment. But development allows for teams like those on the 538 list of overachievers to make up ground on those who acquire a higher level of talent through acquisition.

Whether it's the "find the big-boned Northern European types and get some excellent running backs to run behind them" approach of Wisconsin or the "find great athletes and teach them a position" approach of someone like Missouri, certain programs/coaches have been particularly solid at making up ground through development.

The question, then, becomes this: what should recruiting services do about that? I've always wanted to attempt a study looking at the positions, areas of the country, etc., that are more likely to feature underrated or overrated prospects. If a recruiting service were to pull something like this off, then it could tweak is own ratings a bit to better account for this and improve the predictive qualities of its own ratings, taking us further down the road from a projection standpoint.

As it stands, however, we end up with an F/+ top 10 that features (according to Ian's table in the link above) five top-15 recruiting teams, four teams that rank between 16th and 30th, and a TCU-shaped outlier.

Recruiting tells us half of the teams that will be good, and development and deployment take us the rest of the way. That's still worthwhile, and it still suggests recruiting rankings are predictive and important; they're just not end-all-be-all. And that takes us to a "perfect as the enemy of good" fork in the road that allows both Bud and Ian to be mostly right in their opinions and assessments.

Last week, I wrote a piece about the vaunted "Bama bump" in recruiting rankings and how it's perfectly logical to at least reevaluate a prospect who receives an offer from a school like Alabama. The gist is simple: if I'm designing a system for evaluating prospects, and my sole goal is to make it as accurate as possible, I would have to consider taking offer lists into account. If I know Alabama (or Ohio State, or, yes, Wisconsin, Oregon, Missouri, etc.) has a great system for evaluating players, and I know that one or more of these systems determined Player A worthy of a scholarship offer, that is probably a data point worthy of consideration.

Again, if my goal is simply to create the most accurate possible ratings, this would make perfect sense. The problem comes when we then judge schools based on these ratings. Alabama offers a guy, and he goes up from 3 stars to 4. Then Alabama signs that guy and gets a stronger class rating because of it.

In the end, wins are all that matter, but it is certainly conceivable that a school can generate some "look at what we're building here!" recruiting buzz based off of good recruiting ratings ... that they helped to influence. If you don't win, nothing else matters, but maybe you're 1% more likely to land good recruits because you were able to previously land "good" recruits. That, of course, means maybe it's smarter to avoid using offer lists altogether ... which potentially makes your recruiting rankings slightly less accurate. And on and on.

This is all pretty tricky, is what I'm saying.

"No titles" is a bit misleading

Bud has done a strong job through the years of pointing out the teams who have "championship-grade recruiting", and as he has pointed out a few times, the list of "overachievers" in the 538 piece linked above -- Wisconsin, Oregon, Missouri, Oregon State, Georgia Tech, West Virginia, Stanford, Virginia Tech, Northwestern, TCU -- includes nobody who has won a national title in the span of the study (2005-14). In fact, since World War II, the teams on this list can claim two national titles, period: Georgia Tech in 1952 and 1990.

This tidbit is a pretty cold splash of water to the face, but as Bud has mentioned, it's also a bit misleading.

I don't think it's crazy that one of these 538 top ten schools can win a title. They just haven't in last decades. pic.twitter.com/DgKiuOJcDo

If the Playoff committee chooses TCU instead of Ohio State in 2014, the odds are pretty decent that either Oregon or TCU wins the national title. (And if the committee had selected Baylor over Ohio State, then Oregon's odds become excellent and Baylor's odds are at least decent.) And if a Playoff had existed in 2010 (TCU/Wisconsin) or 2007 (West Virginia), teams on this list would have had decent odds of pulling off a win.

Oregon, Missouri, Stanford, and TCU have all engineered top-5 finishes in the past five years, and almost everybody on the list (sans Northwestern) has finished in the top 5 or top 10 since 2000. That alone tells you that one of them could have won a title with non-infinitesimal odds. That they didn't shows how hard it is, but it's far from impossible.

Of course, there's another factor at play here, too: we don't all get to root for national title contenders. Or at least, most of us root for a team we hope can make a title run every five or 10 or 25 years; most of us don't root for the blue-bloods who claim most of the blue-chippers.

This is a bit of a digression, but one of my pet peeves when it comes to our national discussion of college football is that so much of it centers around the national title. The tag line for ESPN's pre-Signing Day commercials was "The road to the Playoff begins on Signing Day" (or something close to that). Bud's studies of blue-chippers and national title tells us who can leigitimately win the title.

This all makes sense, of course: titles are a good percentage of what we follow in any sport. So I realize I'm kind of screaming into a void here.

But there are 128 teams in FBS, and in any given year, about six to 10 of them can entertain serious title thoughts. Another five to 10 maybe can for a few weeks. But all of them are looking for things to enjoy and celebrate, and so much of what I personally enjoy about the sport comes from outside the race, often far outside. So yeah, a lack of blue-chippers probably tells us that Minnesota, for example, isn't going to win a national title anytime soon, but Minnesota hasn't competed for a title in 50 years, and Gopher fans are still pretty thrilled with how Jerry Kill has gone about making their team competitive again. Maybe their ceiling under Kill doesn't include a national title run, but it might include a lot more highs than they've experienced recently. And it could in theory include a Big Ten title run with an upset or two. That's still pretty exciting.

There are tiers of goals in college football -- national title to conference title to 10-win season to good bowl to any bowl to simple improvement over last year -- and while focusing on blue-chippers and the schools that don't have to overachieve to win will certainly tell us quite a bit about that first tier, there's still plenty of reason to pay attention to the other tiers, too. And there's still reason to be incredibly impressed with how Wisconsin has gone about winning games.

But again, I digress. 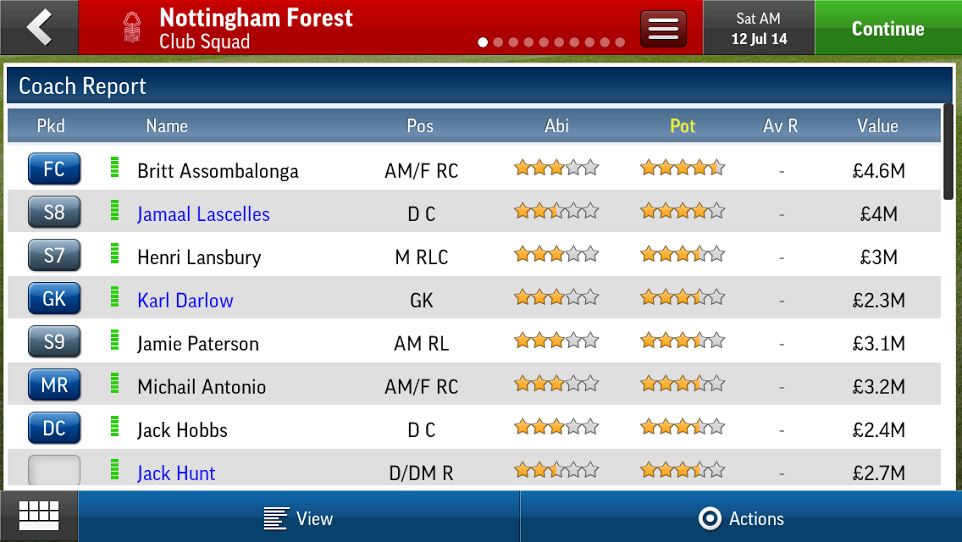 I've long since given up on having time to play actual video games, but my go-to diversion of choice has for years been Football Manager. The computer version of this game is as addictive and involved as any game on the planet; the 20th anniversary of the game inspired a pretty fun book written by Iain Macintosh and others called Football Manager Stole My Life. The gist is simple: you get to run a soccer team. It's similar to the dynasty/career modes set up on any of our favorite EA games, but you only manage, and you don't play the games. It's amazingly addictive.

I play only the handheld version, both because a) I am married, and I would like to keep it that way (the handheld version is only about 75% as involved as the computer version), and b) our TV is usually tuned to Disney Junior (for the 3-year old) or HGTV (for the wife). But it overtook Bejeweled and blackjack as my mobile game of choice in about 2011, and it's the only game I've needed since.

I mention this because of the screenshot above. I would love to see recruiting rankings move in a direction like what you see there: ability and potential. Your team's "Coach Report" screen shows you both what a player currently has to offer and what a player might be able to offer with proper development.

Current recruiting services tend to try to toe the line between the two. They look at both a player's instant-impact potential and the raw athletic potential that could be coaxed out three, four, or five years down the road. If I were designing a new system of evaluating prospects, I would love to try to take my ratings in two different directions.

Granted, this approach might hinder the HORSERACE!!!! narrative -- do you rank classes based on the first rating or the second rating? -- and from a "give 'em what they want" perspective, business is pretty good for recruiting services right now, so there's no need to blur up the picture. But if the goal is accuracy and pure descriptive quality, this would tell us far more than what we currently get.

This would allow us to say that a player like Florida State signee Derwin James maybe has 4.0-star ability and 5.0-star potential while a player like Missouri signee Franklin Agbasimere, a Nigeria transplant who has only played football for a year and a half but has crazy athletic potential (his highlight film is fun and screams "RAWWWW"), maybe has 2.0-star ability and 4.5-star potential.

When I rule the college football universe, this is what I want to see.