Jordan Lynch was undoubtedly one of the most productive quarterbacks in NCAA history, but was denied becoming the NCAA’s first single season 2,000 yard rusher and 2,000 yard passer on Boxing Day’s Poinsettia Bowl. Utah State held Lynch to just 39 yards rushing, a far cry from his average.

Share All sharing options for: How Utah State Bottled Up Jordan Lynch

Utah State owns the ninth-ranked defense in the country according to Defensive F/+, so Lynch’s regression could be expected. What did the Utah State defense do contain Lynch’s threat as a rusher and a passer?

Overall, the Aggies’ game plan wasn’t dissimilar to what many defenses do to counter running quarterbacks: cheat a defender into the ally between the tackle and slot receiver, designate a linebacker to spy during man coverage, and bank on the opposing quarterback being unable to exploit the holes created from committing extra defenders to the run.

For instance, on this third-and-long attempt, the Aggies walked seven into the box and then rushed six on an overload blitz to the weak side. 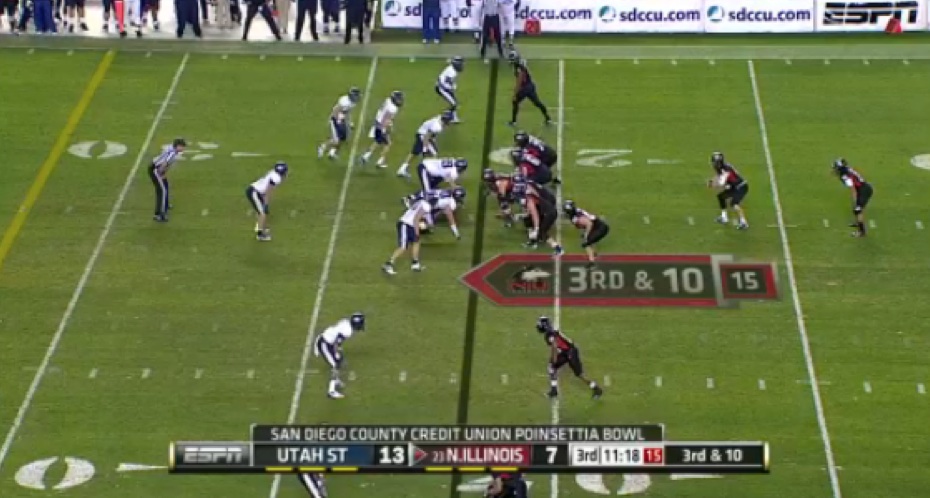 Against an obvious pass, Utah State has just two down linemen, choosing to rush six against seven Husky blockers and leaving three defensive backs in man coverage with a single high safety. While it’s normally risky to play man against a strong rushing quarterback, the Aggies leave both the strong side outside linebacker and middle linebacker to check Lynch’s potential scrambling.

The three stacked weak side rushers overwhelm the right side of the offensive line, hitting Lynch’s backside before he can step up into a collapsing pocket.

Throughout the game Utah State turned to this two down linemen look, but still was able to pressure Lynch and collapse the middle of the pocket. While this is damning for the interior of the Husky offensive line, Lynch also attempted to scramble too early without seeing open receivers.

While the Aggies presented multiple looks at the Husky offense, one common look had Utah State shift their coverage towards the side with the slot receiver, with an athletic linebacker aligning between slot and tackle. He is the key to containing Lynch running outside on read plays, with a safety moving up to cover the slot and the defensive end crashing down.

The Aggies move their boundary side corner and safety almost into the box, allowing them to help in run support on the strong side of the formation. The play was ultimately a fake pitch to the strong side with the center and guard pulling and a pass to the outside receiver. Lynch failed to set his feet and then threw a low velocity pass into coverage. 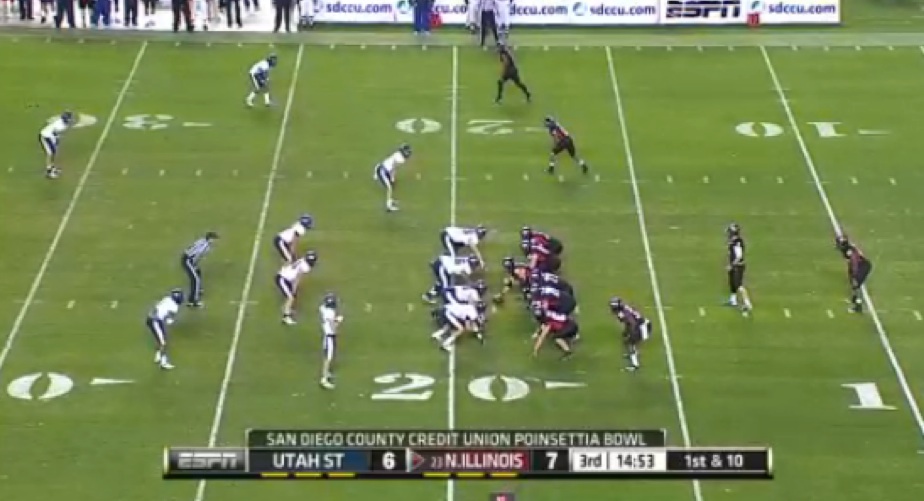 In general, the Aggies committed additional defenders to run support in the box using a variety of cheating linebackers, blitzers, and spies to contain Lynch when in man coverage. The Aggies relied on speed personnel over size, allowing sets with just two down linemen to be effective. Stopping the run game was the Aggies' first priority, even at the risk of leaving open passing lanes. The Aggies didn’t do anything revolutionary schematically, but executed well and won individual battles along the line of scrimmage.