Share All sharing options for: The Toolbox: Offensive Line Stats

One of the many areas in which football stats differ from those of other sports is with the nature of the offensive line.  We can figure out ways to evaluate individuals at the skill positions, and potentially even at a few positions on defense, but without knowing the playcall and knowing the role of every lineman, how can one possibly hope to evaluate an offensive line as a whole?  Even full game-charting data would only get us a small portion of the way there.

So we do what we can.  There are two primary measures we use for evaluating offensive line play.  Obviously there are no individual evaluations here -- the only thing we have that includes a single lineman's name is when they commit a penalty -- but with the following two measures (which you've already seen used quite a bit in the Summer Vacation series), we can at least get a general idea for how well an offensive line performed as compared to other units on offense.

From the NFL definition of Adjusted Line yards at the Football Outsiders glossary:

How did Aaron and company come up with those numbers?  From an expanded explanation:

We have enough data amassed that we can try to separate the effect that the running back has on a particular play from the effect of the offensive line (and other offensive blockers) and the effect of the defense. A team might have two running backs in its stable: RB A, who averages 3.0 yards per carry, and RB B, who averages 3.5 yards per carry. Who is the better back? Imagine that RB A doesn't just average 3.0 yards per carry, but gets exactly 3 yards on every single carry, while RB B has a highly variable yardage output: sometimes 5 yards, sometimes -2 yards, sometimes 20 yards. The difference in variability between the runners can be exploited to not only determine the difference between the runners, but the effect the offensive line has on every running play.

We know that at some point in every long running play, the running back has gotten past all of his offensive line blocks. From here on, the rest of the play is dependent on the runner's own speed and elusiveness, combined with the speed and tackling ability of the defensive players. If Tiki Barber breaks through the line for 50 yards, avoiding tacklers all the way to the goal line, his offensive line has done a great job -- but they aren't responsible for most of that run. How much are they responsible for?

The system is far from perfect. We don't know when a guard is pulling and when a guard is blocking straight ahead. We know that some runners are just inherently better going up the middle, and some are better going side to side, and we can't measure how much that impacts these numbers. We have no way of knowing the blocking contribution made by fullbacks, tight ends, or wide receivers.

There is a decent possibility that the parameters for line yards could be a little different at the collegiate level -- just like the parameters for success rates are different; one day I'll get to that piece of the to-do list.  For now, we simply use the NFL definition.  Even if there are differences, they will almost certainly not be significant enough to render the current measure worthless.

The Adj. Line Yards figure you see both after the jump and in the Summer Vacation profiles basically combines a team's Line Yards per carry with an adjustment for the quality of opponent.  I am sharing both the raw and adjusted figures below.

This one is a little easier to figure out.  Sack Rate is simply (Sacks) / (Sacks + Passes).  It tells you how frequently a passer was sacked per pass attempt.  The "adjusted" portion of Adj. Sack Rates has the same sentiment as the adjustment for line yards -- it looks at who the pass attempts came against and how many sacks would have been expected against said opponents.  Again, below you'll see both raw and adjusted sack figures.

For purposes of team profiles, I like to look a lot at standard downs and passing downs sack rates.  It is part of the equation for the "Need for Blitzes" portion of the Defensive Footprint.  But for the rates below, it simply looks at all pass attempts -- standard down or passing down -- that took place while a game was "close."

For perspective, I am listing the below teams according to their Adj. Run-Pass Ratio.  As you'll see, there is a bit of a correlation between Run-Pass Ratio and Adj. Line Yards.  To find your team the fastest, I would recommend simply doing a Ctrl-F search.

Quick note: like all the other opponent-adjusted stats I work with, Adj. Line Yards and Adj. Sack Rate are calibrated so that 100.0 = perfectly average. Above 100 is good, below 100 is bad. You'll notice that the extremes on both ends of the Adj. Sack Rate scale are much further from average than on the Adj. Line Yards scale. Among other things, that is because teams allow between about 10 and 40 sacks in a given year, but even the least-frequent rushing team rushes hundreds of times. The scale is a bit more sensitive on the sack rates side of the equation, then.

Cam Newton was incredible in 2010, but he had quite possibly the best run blocking in the country doing him some favors as well (it is always a possibility, of course, that he was doing them some favors along the way too, and that rubbed off on their line numbers). That's how Newton's Adj. POE was not the highest among QBs.

How does Hawaii's Alex Green end up atop the Adj. POE rankings for 2010? Well, running when everybody expected a pass certainly helped ... but what perhaps made an even larger difference is the fact that his line did him very few favors. What Adj. POE sees is that most of the yards he generated, he generated on his own.

If you look closely enough, you can see Hawaii wasn't alone in the "don't run much, don't block the run well" crowd. While there is no correlation whatsoever between run-pass ratios and sack rates (which somewhat makes sense, since being pass-heavy could mean quick hitch after quick hitch and low sack rates, or it could mean old school, downfield passing and high sack rates), there is a reasonably strong one between run-pass ratios and line yards. A 0.33 correlation, to be exact. Not huge, but solid. 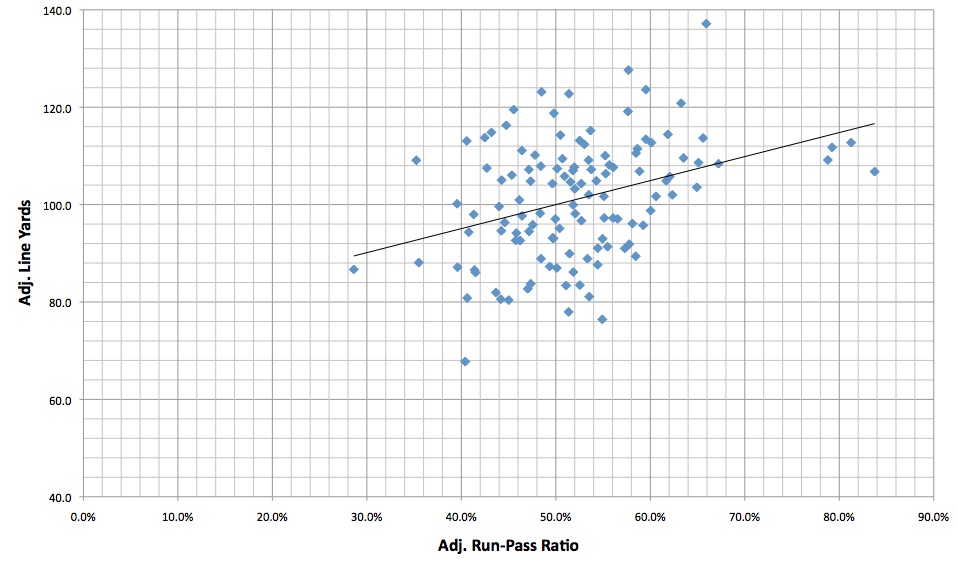 So sack rates depend on scheme and intent (and a passer's own ability to avoid the rush). Line yards depend, at least partially, on practice and repetition.

But this is a start. You can learn more about a line with these stats than without them, which means they're worth something, even if we shouldn't overreact to the numbers' conclusions.