The Big Shootout: The documentary of the 1969 Texas vs Arkansas game

The Big Shootout is a documentary chronicling the titanic 1969 game between Texas and Arkansas, considered one of the greatest games in the history of college football. It will premiere this weekend at the Dallas International Film Festival. One of the filmmakers, Mike Looney, recently spoke with Football Study Hall about this epic contest and its repercussions.

Share All sharing options for: The Big Shootout: The documentary of the 1969 Texas vs Arkansas game

Football Study Hall: Why is this game so important and why did you feel the need to make a film about it?

Mike Looney: A story like this only comes around once in a lifetime. There's that old saying "fact is stranger than fiction" is really true here. If you made all this up, no one would believe it. The reason it's important, there's a long laundry list, but first and foremost, is it was the first sporting event arranged for television. The very first one where TV circled around the event.

[ABC Sports executive] Roone Arledge went to Beano Cook and said "It's the 100th year of college football, we've got to do something special. Why don't you look over all the schedules – no computers, no nothing – and figure out what game we can pluck out of the middle of the year and put it as the final game of the season. And, Beano, by the way, why don't you pick who's gonna be ranked No. 1 and No. 2 and we'll get [US President Richard] Nixon to come and crown the national champion."

It was all a dream because it couldn't happen. Especially since Ohio State was the defending champion and they had all their starters back. Beano said they'd lose to somebody. I don't know who, but they will lose to somebody and, besides, even if they don't if we put them at the end of the season whoever we pick to play them will have three or four losses. Texas and Arkansas have a chance to be undefeated and, worst case, they'll be [ranked] No. 2 and No. 3.

And, lo and behold, that's was exactly what happened. 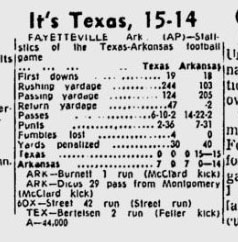 FbSH: Now, prior to 1969 there had been other big games that captured national interest such as the 1966 Michigan State v. Notre Dame game that had that kind of big television production. How was this game different?

Looney: First of all they didn't have that kind of production. That Notre Dame game couldn't be seen in certain parts of the country. This was a national telecast. And this game involved changing the schedule. Texas and Arkansas were originally scheduled to play in October. So it was the first time they had taken a college game and said, "Okay, let's arrange television around it and move it to the end of the year when it will be the only game that weekend."

FbSH: What other historic impact is there from this game?

Looney: It's one of the last major college game featuring all-white participants, and that makes it, from a historical perspective, very significant. And one of the reason we wanted to do this film was to teach kids, my kids' age, what was happening in 1969.

Nixon said it wasn't about politics and his people will tell you that, like they told us. But it was. He had not won either state in the 1968 election and he was a huge fan of the game, too. When Nixon came, then that brought Donald Donner – possibly the only Vietnam vet on that Arkansas campus – to lead an anti-Vietnam War demonstration outside the stadium, where Nixon saw it the whole time. ABC refused to show it.

The anti-Vietnam sentiment in Fayetteville was not significant. The White House wasn't afraid of that. They were not afraid of that at all. As it turns out, there was a demonstration. It was very peaceful. What they were a little more concerned about was the racial unrest.

They were warned that the blacks students weren't happy about some things, particularly that the Arkansas band always played "Dixie" after every score. So Arkansas succumbed to that pressure and the night before the game at the pep rally the band director announced they would not play the song at the game the next day. One of the black students got shot after the pep rally, fortunately he was not seriously injured.

That part there is still a lot of debate about. The black students were planning on taking the field if the band played "Dixie." When we were interviewing the Arkansas players they said nothing would have happened. That those fans wouldn't have done anything. We interviewed one of the black students organizing [the protest] and he said, "Bullshit. If we had taken that field, there would have been a riot." And I tend to agree with him. Those people were amped up like Ted Nugent. Everyone we interviewed, who had been around football before that and after that, they all said you had never seen anything like it, the electricity running through that crowd.

Incidentally, Texas and Arkansas both had, that year, black scholarship players on their freshman team.

FbSH: Since this game was the last major contest that featured all-white teams, and when Texas won, they became the last all-white squad to win the national championship -- as well as the fact it was such an enormous television spectacle -- was this game in some way a catalyst for the changes that would soon overtake the game? Or was it the end of an era? 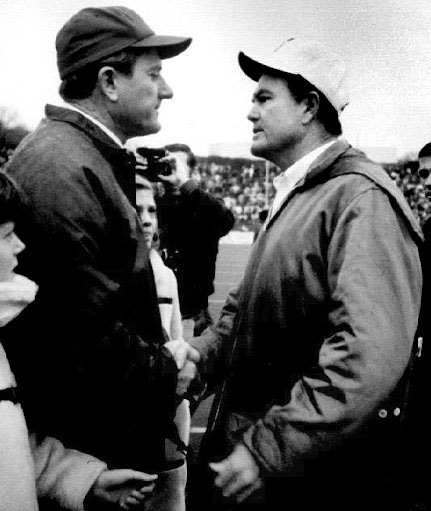 Looney: I think it was bigger than anyone ever dreamed. They were hoping it would be big and they didn't realize that it would be that big. And it has only gotten bigger as time has gone on. As [Texas head coach] Darrell Royal told us in our interview, "This is the only game people come back and ask me about. This is the only one." And [Arkansas head coach Frank] Broyles, for 41 years, never gave one interview about it. And he still hasn't seen the game film.

Looney: It's just so painful for him. Because, if you watch the game from start to finish, it makes you go "How the hell did Texas win?" And the Texas guys use the term "divine intervention" in describing it. They don't say they were better than Arkansas, they say "God must have been involved." It was all just so strange.

FbSH: Very often, football games become defined by individual and controversial plays. In a major game with a counter-intuitive outcome, people seem to want to find a single reason to explain what happened. Did that happen with this game?

Looney: A lot of people think one play changed the game, but the people that really know the game will not tell you that. Some people will say it was the miraculous fourth-and-2 pass to Randy Peschel. Probably more people will say was when Arkansas was on the 7-yard-line and all they had to do was kick a field goal with three minutes left [the Razorbacks passed, and it was intercepted]. That is a huge debate among Arkansas people to this day. And I think that's what pains Broyles, that they just got greedy instead of taking the field goal to win it.

FbSH: Now, there was an Arkansas touchdown early in the game that was nullified by a penalty, wasn't there?

Looney: The flag on the touchdown was the biggest play in the game because it shouldn't have ever happened. In that era, players were told never to talk to an official. They didn't do that back then, they didn't say a word. After that touchdown, Arkansas was getting ready to kick the extra point and [Texas defensive back Tom] Campbell tells the ref "[Arkansas receiver John Rees] was trying to block me." And the ref thinks about it for a while and then says, "You're right," and he throws the flag. That's the game. It would have been 14-0 in the second quarter. That, and the score in the third quarter would have put it out of reach for the Longhorns. There ain't no way Texas comes back from down three touchdowns.

FbSH: So when Texas did pull of the win, Nixon gives them a plaque that says they are national champions, but there were still bowl games to play and at least one undefeated team [Penn State]. How did that all come about?

Looney: It's amazing how it worked out. [Penn State head coach Joe] Paterno let the Penn State team vote and they choose to go to the Orange Bowl because they would rather go play in the sun [against Missouri] than play the No. 2 team in the country. They just figured Ohio State would never lose, and the game wouldn't be for anything. Then [Notre Dame head coach Ara] Parsegian convinces his bosses to lift their bowl ban saying "We'll go down and play the winner of that game, and we'll beat 'em and win the national championship." Paterno really shows the cracks in his armor during all of this. He eventually turned down a plaque for the nation's longest winning streak. Never took it. Wouldn't accept it.

What's kind of ironic is that plaque that Nixon presented to Texas on national TV that day is lost. No one can find it. No one knows where it is. 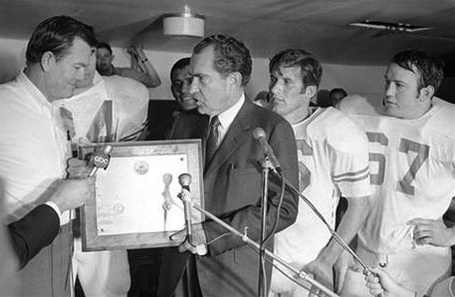 FbSH: How did the game affect both the programs afterward?

Looney: Both teams had a pretty darned good run through the late-1960s. Arkansas and Texas had the same amount of wins in the '60s (82), and only Alabama had more (84). But in the '70s both those schools became more ... mortal. It's hard to say what exactly caused that, but this was the high point for them both. Both Royal and Broyles stepped down the same year a few years later [1976].

It's not really generally known why Royal chose to quit. Royal was convinced he would not be able to recruit black athletes because of negative recruiting. He resigned with the understanding [longtime assistant] Mike Campbell was going to get the job, and then, when they gave the job to Freddy Akers, he said, "Hell, I wouldn't have quit if I knew they weren't going to give you [Campbell] the job."

FbSH: What about for Arkansas?

Looney: One of the thing I was really struck with making this film was how the "agony of defeat" was so much more powerful than "the thrill of victory." It was a huge wound for them and for Broyles. It caused a rift between Broyles and his players. Several of the the [Arkansas] players say that that game was so devastating that it taught them how to handle adversity for the rest of their life. And this thing had an incredible impact on the people of Arkansas. And we hope this film can help some with the healing because the wound is still there for many of them.

"The Big Shootout" will premiere at 3:30 p.m. on Saturday at the Texas Theater in Oak Cliff as part of the Dallas International Film Festival. Tickets can be ordered online through the festival's website. • The website for the film, which features numerous outtakes from the interviews, can be found here. • If you would like to learn even more about this famous contest you can read Terry Frei's 2004 book on the game, Horns, Hogs, & Nixon Coming.