Last week we asked some of the folks around SB Nation what books they would suggest college football fans need to read during the off-season. This week the Football Study Hall editorial staff provides their recommendations for books you need to have on your summer reading list. 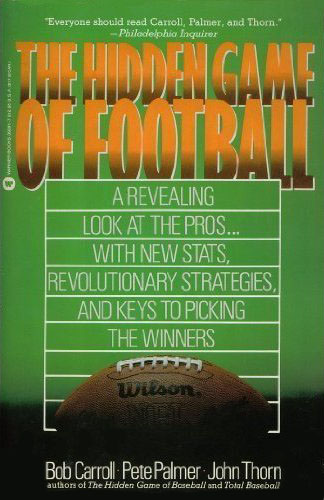 The Hidden Game of Football

The Hidden Game of Football is influential, curmudgeonly, sarcastic, weird and still quite relevant. It is the sports version of Charles Mingus' The Black Saint and the Sinner Lady. It is still one-of-a-kind 25 years after it was published, and if you read certain passages for the second or third time, it still makes you think, "Huh, I wasn't thinking of it like that."

One can find plenty of statistical influence in football writing from before 1988, but The Hidden Game was the first book to basically strip down everything we thought about stats and attempt to start over.

Bob Carroll, Pete Palmer, and John Thorn considered field position from the perspective of expected points, and they offered a Net Points concept that heavily influenced Football Outsiders' Aaron Schatz and forced me to reconsider the way I was coming up with my own equivalent points idea.

They considered the relevance, and general effectiveness, of conventional football strategy. Here they are, describing a coach's tendency to kick 18- or 19-yard field goals instead of going for the touchdown:

"The idea that you gotta-come-away-with-something is on page six of 'The Coach's Book of Conventional Wisdom,' which every coach receives along with his first whistle on a lanyard. It's in red ink. Underneath it's explained that any team that gets close to the goal line and doesn't come away with a point or so will undergo a psychic shock roughly akin to being weaned."

"Meanwhile, the winners who usually draft the best available, etc., are kidding themselves. By the twenty-fifth pick, the odds are stacked against finding a gem. They should decide where weaknesses are likely to occur two or three seasons from now and jump on them now."

They weighed the value of field position. They took a different approach to determining football's greatest quarterbacks, running backs and receivers. They mocked the "you have to establish the run in order to pass" truism. They tracked how the game of football had become what it was in 1988. And they did so with personality. There is not a single dry sentence among the 400 pages or so of words and numbers.

I don't agree with every word, but that's not really the point. And in looking for the quotes above, I stumbled across a couple of things I'd forgotten, things that made me think "Huh, I wasn't thinking of it like that." Chances are, The Hidden Game will do the same for you.

Bill Connelly is the owner of Football Study Hall. He is also a contributor to Football Outsiders and SB Nation's Missouri Tigers site Rock M Nation. You can follow him on Twitter @SBN_BillC. 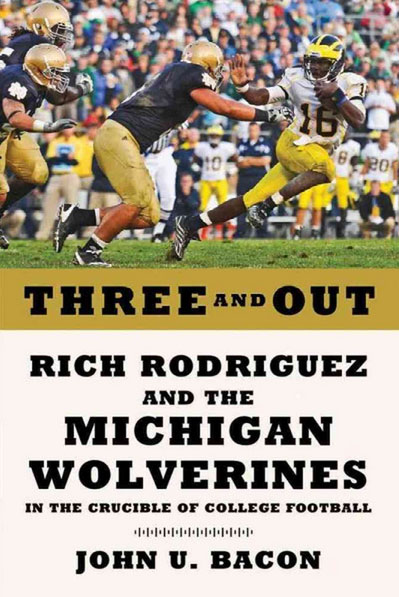 You don't have to be a fan of Rich Rodriguez to enjoy John Bacon's Three and Out, but it would probably help. John Bacon was given nearly unfettered access to Rich Rodriguez and his three ill-fated seasons as the head coach at Michigan and a produced a very sympathetic chronicle of Michigan's experiment with a non "Michigan Man" as head coach of one of college football's most storied programs.

Bacon provides a detailed account of Rodriguez and his working class roots, his dogged determination to play at West Virginia, his rise through the coaching ranks beginning at tiny Glenville State where he tinkered with spread and no-huddle offenses, to stints at Tulane and Clemson as offensive coordinator, to his return to West Virginia as head coach where his offense was one poor game against rival Pitt from playing for a national title.

Given his access to Rodriguez, Three and Out paints a very sympathetic picture of all the well-known aspects of his ultimate failure at Michigan. According to Bacon, Rodriguez left his alma mater for Michigan to escape double-crossing, egomaniacal leadership at West Virginia that bristled at his becoming more famous than they. Rodriguez always seemed like an outsider at Michigan not so much because he sought to impose his spread-option offense on talent that did not suit it, but because the athletic department leadership (and Lloyd Carr) failed to embrace him from the start.

Bacon argues that Rodriguez didn't violate any NCAA rules with extraordinarily long practice days, but instead, was the victim of athletic department underlings failed to maintain records they'd kept in the past. Failings on the field, at least, were laid mostly at the feet of Rodriguez and his inability to field a competent defense and his devotion to Tate Forcier as the quarterback of the future.

While focused narrowly on Rodriguez, Three and Out contains a great deal of historical and anecdotal information that fans of college football in general would enjoy. Bacon traces Michigan, the song "Hail to the Victors," the Big Ten, and the rivalry with Ohio State all the way back to the initial college football game between Rutgers and Princeton. Later, Bacon spends a chapter telling the now well-known story of the basic zone read play being the result of improvisation by his Glenville State quarterback Jed Drenning.

Bacon records, hilariously, that when Lloyd Carr retired, LSU head coach Les Miles was interested in the job, but that the athletic director at the time could not be reached on his vacation because he had a new cell phone that did not know how to work. A fact that exemplified just how ill-equipped Michigan was to engage in a coaching search at the time.

Finally, he chronicles how, after three seasons, Rodriguez sealed his own fate with his bizarre decision to sing Jsh Groban's "You Lift Me Up" at the season ending banquet. A move so awkward, Dave Brandon felt there was no way to bring him back.

In all, the book is an enjoyable blend of personal and historical information about the people in the past and present that made Michigan football what it is, alongside detailed recounting of the failings on the field that ultimately doomed Rich Rodriguez after three seasons in Ann Arbor.

Mark Ennis is a Football Study Hall editor. He is also a manager at the SB Nation site covering the Big East Conference, Big East Coast Bias. You can follow him on Twitter @Mengus22. 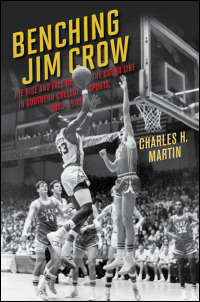 A half century ago, this country was transformed by the civil rights movement. The Brown vs. Board of Education decision by the Supreme Court in 1954 initiated a long difficult journey of dismantling the insidious system of segregation that existed by law in the South and by practice almost everywhere else. From our perspective of today, it is almost impossible to understand just how daunting this challenge was and the obstacles facing those wanting to change things they recognized as unjust.

College football, with its preeminent place in American society, became a highly-visible barometer of the social changes being bought at such a high price by civil rights pioneers. The great events of the movement such as the March on Washington showed the struggle writ large in the public view. The arduous journey to tear down the barriers that barred black athletes from competing on the football field spoke to changes on a more local level. Each accomplishment was a highly visible example of the innumerable efforts by thousands of anonymous Americans who tried to change their world for the better.

Today we take the presence of black (and other minority) athletes so much for granted we barely understand exactly how revolutionary their widespread admittance to the college game actually was. While the NFL integrated decades before the last Southeastern Conference schools, blanket integration of college football opened the door to a conduit of talent the game had never seen. With the possible exception of television, no single thing has more greatly transformed the game or is more responsible for its widespread success.

Yet the story of how this came about had tended to be told piecemeal. Each individual team may have a general knowledge of its own history of integration but there is very little that looks at how this happened in a comprehensive way. Which is why Charles Martin's 2010 book Benching Jim Crow: The Rise and Fall of the Color Line in Southern College Sports, 1890-1980 is such so important. He outlines how the system of segregation came to dominate the sport and the process of was reversed. Then Martin details how the desegregation of basketball and football at schools in the Atlantic Coast, Southwest and Southeastern conferences came about.

The lesson is that each program faced a different set of challenges in trying to surmount the practice in segregation. And each has a unique and important story to tell about how the actions of those who undertook the challenge of making the change finally succeeded. The modern game of football we take for granted was made possible by individuals such as Jerry LeVais, Nat Northington and Darryl Hill who are barely remembered today. This book makes sure what they accomplished won't be forgotten.

C.J. Schexnayder is an editor for Football Study Hall as well as the SB Nation site covering the Southeastern Conference, Team Speed Kills. He is also the owner of Alabama football history site Remember the Rose Bowl. You can follow him on Twitter at @kleph. 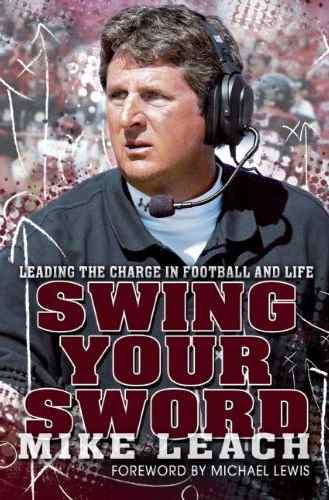 I'd always been fascinated by Mike Leach, but it wasn't until he was hired at my school (Washington State) that I decided to read Swing Your Sword. If you haven't read it, there is a good chance you know about it. Leach goes into detail about his firing at Texas Tech and ESPN's handling of the situation, and led to Bruce Feldman's (who edited Swing Your Sword) departure from the World Wide Leader.

The Tech drama is certainly interesting, but there are far better reasons to read this book, especially for college football fans and aspiring coaches.

Leach's unique personality is no secret, and it resonates throughout the pages. His path to becoming a coach, starting at the end of law school, is indicative of how difficult it is to break into the profession. I often found myself amazed at how he stuck with it, even as he was making next to nothing (with a law school degree). His retelling of his relationship with Hal Mumme and their development of the Air Raid offense might be the best thing in the book.

Swing Your Sword dives into all Leach's coaching philosophies, and how they impact his offense of choice. Fans of this site will appreciate Leach's mathematical view of the football field and space. He gets into the geometry of the field and creating space for his receivers. Leach also discusses why he doesn't have a playbook, why receivers only line up on one side of the field, and how he creates an active practice atmosphere.

I was already excited when Leach was hired to coach WSU, and reading his book only amplified that. It's refreshing to see a coach that thinks more like we do and takes a more analytical approach to the game of football (remember this when you are watching teams punt from their opponents' 37-yard-line this season). If you haven't already, I highly recommend picking up Swing Your Sword and finding out exactly what makes Leach tick.

Craig Powers is a Football Study Hall editor. He is also an editor at the SB Nation site covering all things Washington State Cougars, Coug Center. You can follow him on Twitter @TheCraigPowers.