When we asked various college football folks around SB Nation to contribute to off season reading list, Matt Hinton was an obvious choice. But the man we know as Sunday Morning Quarterback won't be constrained by "a few hundred words" when writing about the sport he loves. Instead he was kind enough to produce this piece on Ken Denlinger's 1994 examination of Joe Paterno's Penn State program, "For the Glory." 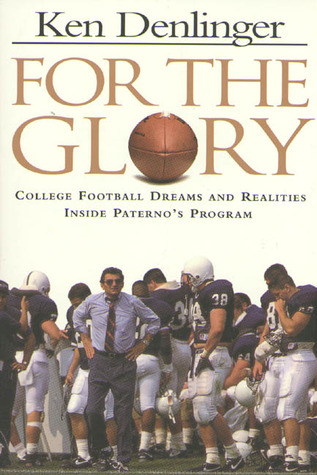 For the Glory: College Football Dreams and Realities Inside Paterno's Program

For most of my teenage years my reading list consisted almost exclusively of books about football coaches, most of them "by" football coaches, as translated through the keyboard of an opportunistic hack who'd won the contract on the heels of - or, for the blessed few, just prior to - a breakthrough season. For awhile these came from the shelf of my father, a high school coach, and accordingly concerned themselves with the imperatives of dedication, motivation, religious faith and other tenets of winning in the Game of Life. I replaced the formative literary clichés of Holden Caufield and Hank Rearden with the bland axioms of Joe Gibbs and Bobby Bowden. With the key difference being that I remember almost nothing about those books now except a story Bo Schembechler told Mitch Albom about an opposing player who told him to "eat shit."

For the Glory is the first football book I bought myself, ostensibly as a Christmas present for my dad, although I'm positive I read it before he did. (If he ever did.) By that time Joe Paterno was easily the most revered and well-chronicled coach in the business, with a couple shelves' worth of books dedicated to his philosophy and success, one or two of which I'd already taken on. But For the Glory wasn't interested in adding to that particular canon. Instead, following the lead of his Washington Post colleague John Feinstein, who'd scored a massive success in 1986 with A Season On the Brink, Denlinger, a Penn State alum, convinced Paterno to grant him "virtually unlimited" access to his program in 1988 with the goal of following a single recruiting class from the beginning of their Nittany Lion careers to the end. The result, published in 1994, was a revelation: A self-described "player's book," told from the perspective of mostly obscure athletes rather than their revered coaches, in real time. It pulled no punches.

In writing this I came across a brief review that described For the Glory as "an attack on college football," which is a cynical misreading. On the contrary, it's Denlinger's clear respect for the sport and especially the athletes who devote themselves to it that compels him to dwell on the quiet disappointments of its casualties as intently as he does on the (much rarer) triumphs of its heroes. In the class he followed, originally composed of 28 incoming recruits in the summer of 1988, seven eventually made it into an NFL training camp, including future starters O.J. McDuffie, John Gerak, Todd Rucci and Todd Burger. But For the Glory belongs every bit as much to Eric Renkey, who begins the book as an intensely recruited linebacker relishing an in-home visit from Paterno, and ends it by suggesting letters of intent come with a disclaimer that, for most players, playing college football will be "five years of pure hell."

The rest of the book is not as bleak as that, but it is determined to weigh the cost of playing big-time football against the legitimate perks, and especially against the mythology. One of Renkey's teammates, Rudy Glocker, says of his legendary coach after a 7-5 finish in 1992, "I think he got soft... He may be obsessed with winning a national championship but maybe he's forgotten what it takes to win it," and criticized what he saw as a double standard for the stars. Derek Van Nort describes his confidence crumbling under coaches' criticism as he struggled to adjust to a new position. Adam Shinnick, who transferred after his freshman season, singles out Paterno for urging him to practice with an injury, leading to a more serious injury. O.J. McDuffie's roommate reported walking in on the future All-American, as a freshman, packing his bags for home. Barely a year after arriving on campus, six members of the 1988 class have left the team and four more have suffered injuries serious enough to cost them a season. Long before the ubiquitous, commodified hype of ESPN, EA Sports and the all-seeing eye of the Internet, Denlinger records the Lions bitching, partying, practicing buzzed and hungover, watching porn, dreading wake-up calls and perpetually confronting the anxiety of school, life and the depth chart, all of them wondering at some point whether the sacrifices required to be a Nittany Lion are worth it.

There is no definitive answer on offer here, though it is telling that Denlinger describes the nine players honored on Senior Day 1992 as "survivors," and goes out of his way to follow through with the classmates who didn't make it. He is explicit in the introduction that "not succeeding at football is hardly the worst thing that can happen to a young man," which is not a sentiment you will find in many books about football. More than half of the '88 class either required at least one surgery during the course of the book or were forced to give up football due to injury; typically, Denlinger reserves his harshest judgment not for a mercurial, aloof Paterno, about whom he concludes "the positives outweigh the negatives," but for the brutal AstroTurf surfaces that proliferated at the time, praying to "see every thread of artificial turf torn up and replaced by God's grass." Two decades later, his (and players') prayer has been effectively answered by FieldTurf, though the NCAA has yet to heed the author's call to reduce the scholarship cap from 85 to 60 to ensure more playing time for everyone who deserves it - ultimately, despite the coaches' stated goal of signing only players they believe can start for two years, just six of the original 28 recruits in For the Glory started for more than one.

Do not, however, repeat the mistake of reading the book as some kind of crusade. At its heart, it's an examination of the threads that slowly, inevitably pull apart a group of people once defined by shared ambition and potential, and of individuals coming of age in ways that often defy that definition. Football is the vehicle. The costs of success and the ways they shape our identities are universal.

Matt Hinton is the owner of SB Nation's college football analysis site Sunday Morning Quarterback. He is a writer for Football Outsiders' college football feature "Seventh Day Adventure." You can follow him on Twitter at @MattRHinton