While Pony Excess, ESPN's phenomenal 30-for-30 documentary on the shady goings-on that led to SMU receiving the death penalty in the late-1980s, may not have shined a positive light on anything to do with SMU, Dallas, the Southwest Conference, boosters, money, college football, college football recruiting, Craig James, Eric Dickerson, Reggie Dupard, former governor Bill Clements, Sherwood Blount (for whom there is a special place reserved in Booster Hell), former SMU athletic director Bob Hitch, or, really, anybody even remotely associated with the university, city, state, or football conference in the entire decades of the 1970s and 1980s, it did succeed in two specific ways: 1) it got people talking about SMU football (no publicity is bad publicity!), and 2) it painted the present-tense SMU football program in a positive, redemptive light.

And to be sure, SMU's revival under June Jones has been nothing short of miraculous. Not only did the Mustangs break through for eight wins and a bowl victory (their first since 1984) in 2009, but they did not give away many gains in 2010. Teams that surge forward in one year tend to regress a bit the next, but SMU did not. The Mustangs advanced to the Conference USA title game via tie-breaker over Tulsa, though Central Florida's defense precluded them from celebrating their first conference title in 26 years.

Beyond everything else, even horizontal steps should still be considered progress for the 'stangs, who have won almost as many games in the past two seasons (15) as they had in the previous six (16), and more than they won from 1989 to 1995 (13). Whether 2011 will see horizontal or vertical progress, however, remains to be seen.

The Adj. Score measure is intended to show how a team would have done against a perfectly average opponent in a given week, and seven of SMU's 14 games were played within five points in terms of Adj. Scoring Margin. That means SMU was a rather consistently, impressively average team throughout most of 2010. (Which, in Conference USA, is above average.) Only four times was the Adj. Scoring Margin over 10 points -- three times good, once bad.

Predictably, then, SMU finished with a .500 record. Tight wins over Tulsa and East Carolina balanced out tight losses to Texas Tech, Navy and Army. And as we'll see below, turnovers really held the Mustangs back at the end of the season. They were minus-5 against Central Florida and Army, turning decent performances (typically good enough to beat an average team) into losses. 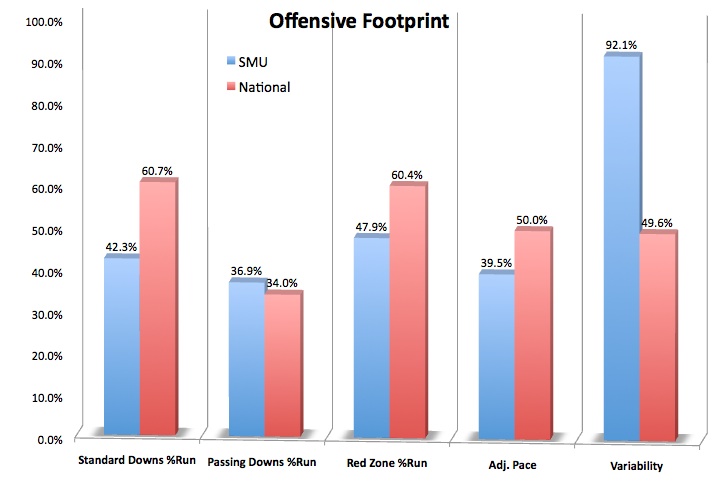 Back in the late-1980s, I rode the passing game to success on Tecmo Bowl by pulling the same thing everybody else did -- running straight backwards with my quarterback until my receivers were sufficiently open downfield, them calmly chucking the ball 85 yards (or 120) for a touchdown. Unfortunately, Kyle Padron was too busy "being born" and "learning how to walk and talk" to play Tecmo in the late-'80s and early-'90s, so he was unaware of the effectiveness of this quarterbacking ploy. He should have perhaps tried it; maneuvering around close to the pocket and waiting for his receivers to get open just got him hit a lot in 2010.

For a CUSA offense, SMU's was certainly not too bad. They were relatively efficient (as evidenced by Top 50 success rates), but they lacked severely in explosiveness (PPP+ rankings in the 70s and 80s). They were not efficient enough on standard downs to be truly consistent without the coinciding athleticism, but, as is the upside to Padron hanging in the pocket and waiting as long as possible to throw the ball, they bailed themselves out enough on passing downs to win their division.

SMU threw as much as anybody in the country (57.7% of the time on standard downs, third most in the country), and for a run-and-shoot offense, a high sack rate can be devastating. The Mustangs ranked 57th in Passing Downs Adj. Sack Rate, meaning, relatively speaking, they handled blitzes rather well. (That they ran a lot of draw plays on those downs didn't hurt. This was a uniquely high-variability offense.) The problem was, they ranked 95th in Standard Downs Adj. Sack Rate. If you watched the Conference USA title game, you know that Kyle Padron had the tendency to hold onto the ball a looooooooooooong time, and against a strong defense like Central Florida, that was deadly. Part of June Jones' offensive style is that isn't all quick reads like your typical spread offense (Texas Tech was at or near the top of the sack rates rankings just about every year in which Mike Leach roamed the sidelines); that said, Padron still needs to figure out where the line is between trying to create and holding onto the ball for too damn long. Against SMU's overall level of competition, 34 sacks is far too many for an offense to be successful, even if it came in over 500 pass attempts. 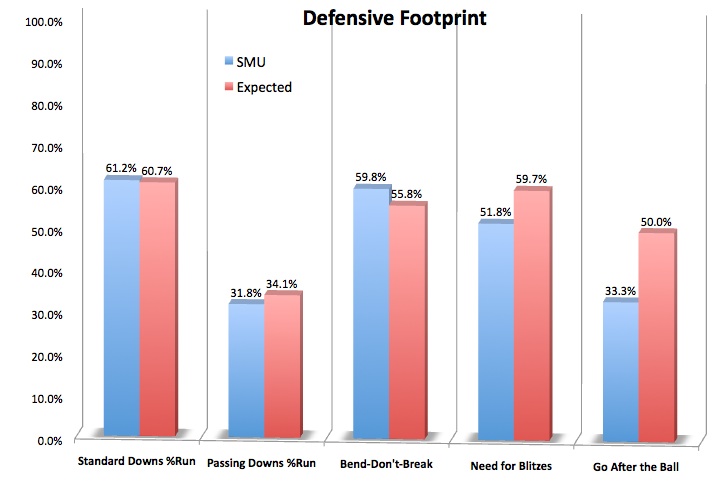 What does this tell us?

When Texas A&M moved from a 4-3 to 3-4 defense this past offseason, it's possible that they weren't just doing it to get the attention of their yearned-for conference to the east ("See, SEC! We play defense like you guys, too! We should totally join your conference! You want our phone number? Here's our phone number. I'll await your call."). It's possible that they just saw how SMU's defense was developing a couple of hours north of College Station.

We get distracted when we see the words "June" and "Jones" put together. All we can think of is ridiculous offenses paired with optional defenses. But SMU's 2010 success, in their second season after defensive coordinator Tom Mason moved to the 3-4 scheme, was perhaps driven more by defense than offense. (I'll give you a moment to let that sink in.)

Since you were more likely to have seen Pony Excess than an actual SMU game this season (even their bowl game had one of those horrible mid-day on a weekday time slots), we'll go with the Beatles, "Dig a Pony." Or maybe Son House's "Shetland Pony Blues." Or Bob Dylan's "New Pony." Or, if we're feeling creative, "1980 World Champion," by The Bad Plus. (There was no song with "slush" or "slush fund" on my iPod. And as far as I know, Slush Puppie doesn't have a theme song, at least not one available on iTunes.)

In Pony Excess, we heard a couple interviewees talking about how SMU was the premier football program of the early-1980s. I ... wouldn't take it that far. This summer at Football Outsiders, I used an Estimated S&P+ figure to rank the Top 100 teams of the past century. Here's where the SMU teams of the early-'80s placed using that rankings system:

Now, to be sure, those are decent numbers. And in terms of SMU's overall history, only their 1935, 1923 and 1947 teams ranked higher than those 1981-82 squads. But everything is bigger in Texas, including the hyperbole. 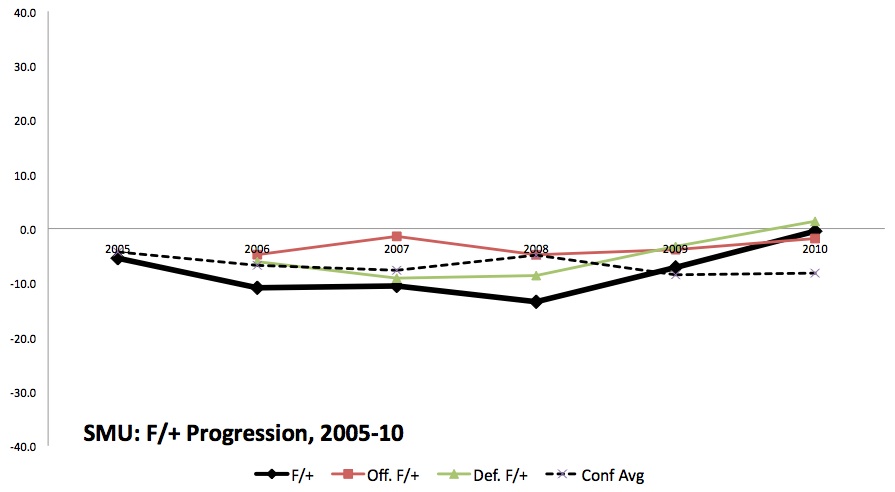 SMU is still in a bit of a danger zone in terms of program health. The best predictor of future success is past success, and the Mustangs have only managed a little bit of it. Once you have reached three, four or five straight solid seasons, you can start to feel comfortable about your program's long-term health. Until two years ago, SMU was horrid.

The good news, of course, is that recruiting is on the upswing. Rivals.com ranked their 2011 class second in the Conference USA, mere decimal points behind that of Central Florida and just outside of the overall Top 50. Of course, incoming recruiting classes don't typically make a huge impact in Year One, so the impact of the last couple of successful classes might not be felt just yet. For the "Five-Year Recruiting Rk" figure above, classes from three and four years ago are weighted more heavily than last year's because as a whole, juniors and seniors are going to impact the product on the field more than freshmen.

The overall experience of the squad, though, will be strong. SMU returns 18 starters, and while the lack of big-play potential on offense could be a concern, the ceiling for the defense is pretty high.

You will likely see Phil Steele mentioning SMU in part of his "Turnovers = Turnaround" bit this summer, and he could be right. But the Mustangs' TO margin in 2010 was very INT-heavy, which is less likely to turn around. If Kyle Padron can make better decisions on standard downs, it could lead to improvement, but we'll see.

In all, SMU very nearly won the Conference USA title last year with poor luck, little big-play ability, and a downright poor turnover margin. If they can replace Aldrick Robinson, they will have a damn good chance of contending again in 2011. Maybe not in the theoretical Southwest Conference, but definitely in Conference USA.