How much does the Oregon offense change when the quarterback changes?

How many major college football awards did the Oregon quarterback win in 2014? Where did the Ducks' starting quarterback in 2015 play the season prior to taking over for the Heisman Trophy winner?

Quick, who was the better quarterback for Oregon: Marcus Mariota or Vernon Adams Jr.?

That's 13 questions. Vernon Adams threw 13 touchdown passes of 25 yards or longer in 2015. Is the obvious answer what we think it is?

The breakdown of Oregon's passing game is simply a product of its offense.

Let's compare the Oregon offense to itself using charting data. Below are general passing stats for the last three years, showing the progression from Marcus Mariota's second year of starting (2013), to his third year (2014), to Adams' first year (2015).

As the tables show, Mariota and Adams, for the majority, kept their passes behind the sticks, which gives the Duck skill players the chance to get into open field and use their quickness and agility. But there are still a few trends to note. 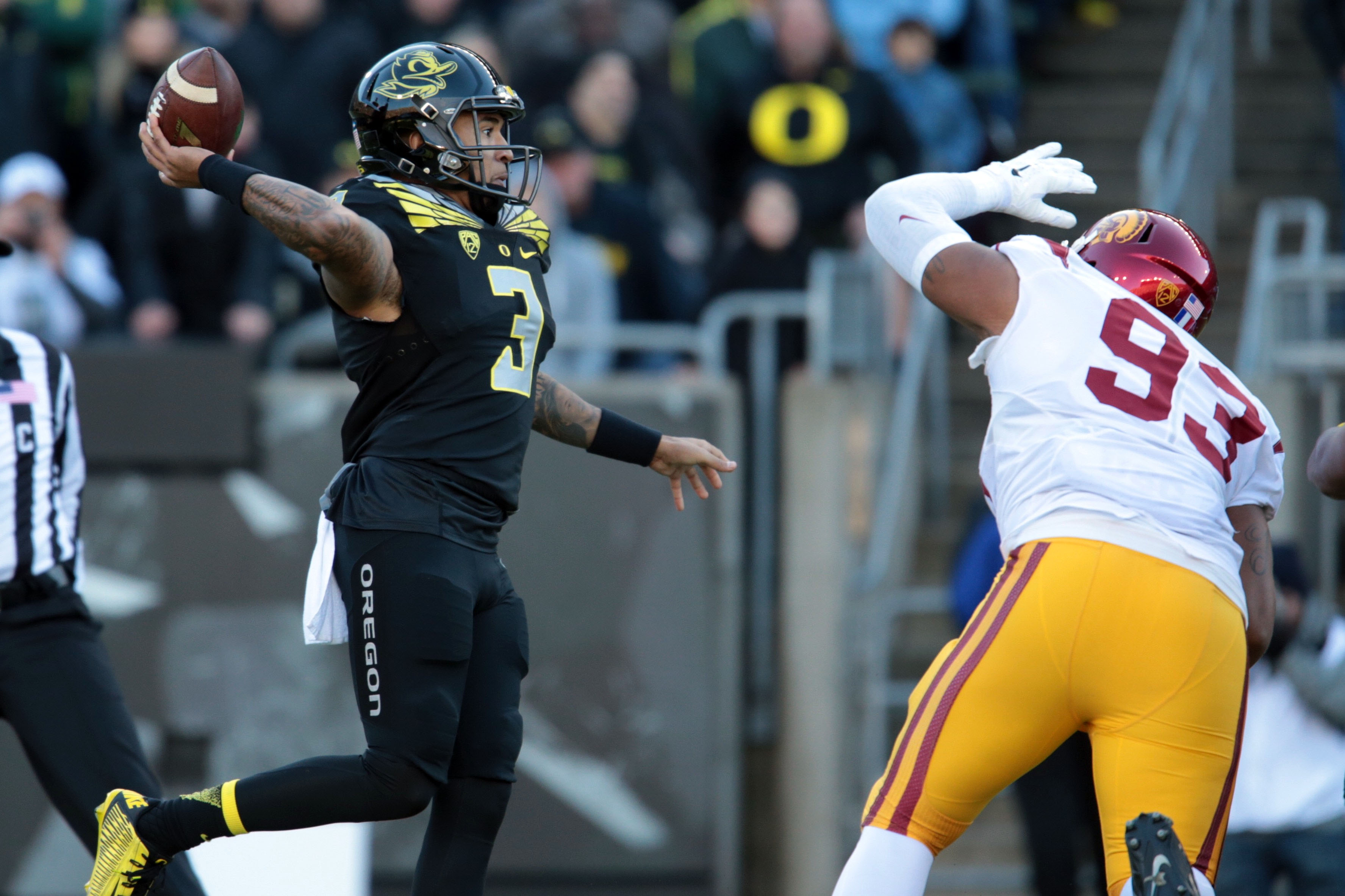 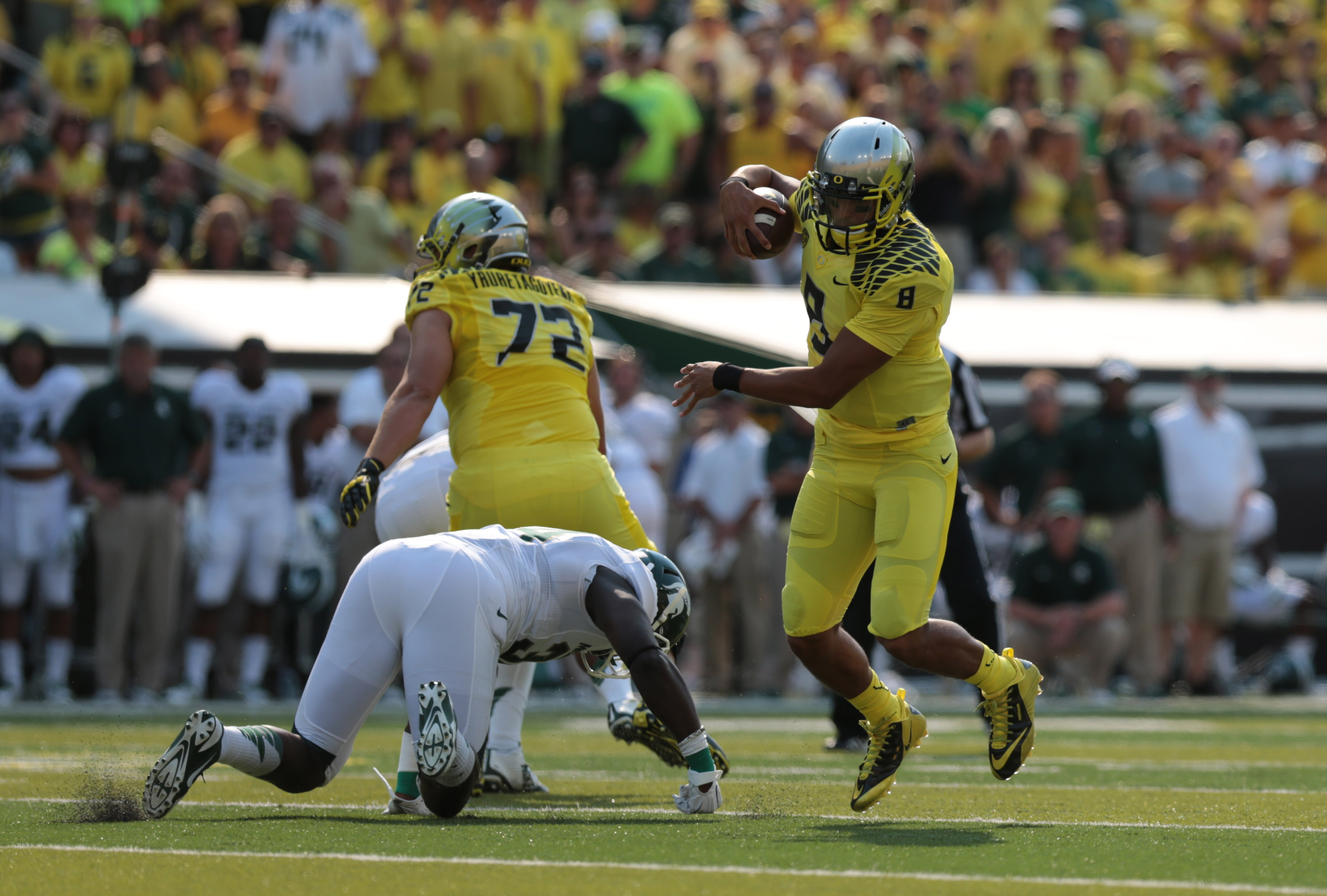 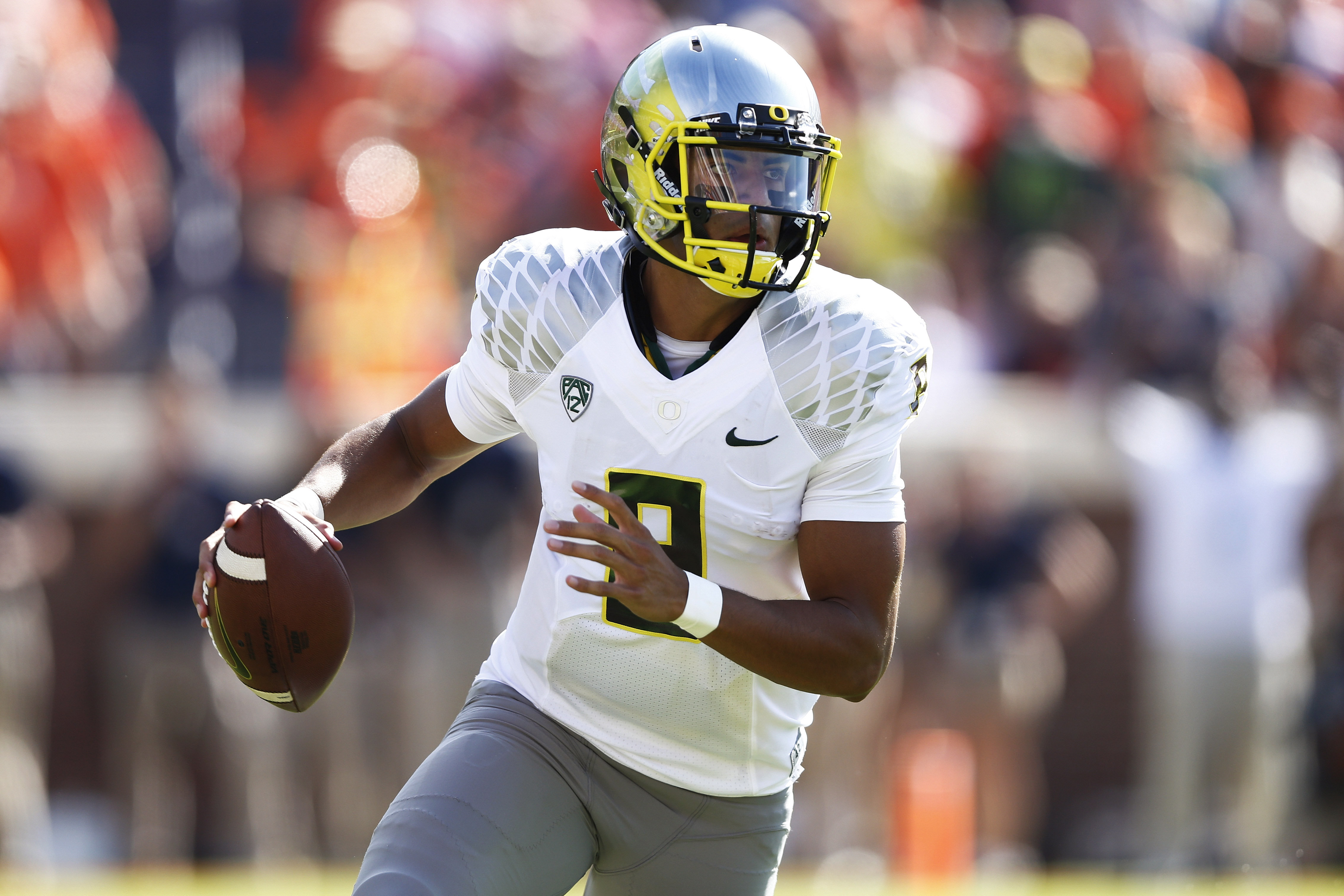 After looking at the breakdown of Mariota and Adams' passing distribution above, a few tendencies become clear.

In this sample, Mariota was also more accurate near the line of scrimmage. In 2013-14, he completed 93 percent of his behind-the-line passes, compared to Adams' 80 percent in 2015. He completed 73 percent of all passes thrown within 15 yards of the line of scrimmage; Adams created 64 percent. As we will see, however, completion rate and success rate are not quite the same thing.

Over the past three years, the majority of pass thrown were outside of the hashes, with most going towards receivers closest to the sidelines (left of hash when on left hash and right of hash when on right hash). That might be a product of the fast-pace offense Oregon enjoys running -- it creates easy throws and gives receivers an opportunity to catch the ball inbounds before stepping out to stop the clock and hurry the offense back to the line of scrimmage.

When breaking it down a little further, Matt Lubick likely has a lot to do with the productivity.

Lubick came to Oregon as the Ducks' passing game coordinator and wide receiver coach in 2013. That year, Oregon set a school-record for total offense in a season with 7,345 yards. The following two years, Oregon had the FBS leader in passing efficiency in Mariota (181.8) and Adams Jr. (179.8).

Prior to the Alamao Bowl against TCU earlier this year, Lubick was promoted to offensive coordinator, after the departure of Scott Frost, and will remain the wide receivers coach, too.

The success rate of Mariota and Adams, displayed in the chart below, is about what someone might expect after watching Oregon games in 2014 and '15.

Adams, coming from Eastern Washington, where he threw the ball all over the state, was the no-brainer choice of the more successful quarterback when it comes to passing plays. Mariota, who was more of a threat to pull the ball and run, made his feet a weapon whereas Adams seemingly only ran when the play broke down (and even then, he would continue looking for open men downfield while he could).

In our sample of charted games, Adams' success rate on passes was 51 percent, and Mariota's was 46 percent. (Adams did take more sacks, however.) Meanwhile, Mariota's success rate on rushing plays was 44 percent to Adams' 25 percent.

So yes, Marcus Mariota was probably the better Oregon quarterback. But Adams found quite a bit of play-making success in the Oregon offense, and the next guy probably will, too.