Is Turner Gill a better coach than Nick Saban? After a timeout, he is.

No, Turner Gill is not a better coach than Nick Saban. Saban has four national titles, and Gill saw his coaching star go dim at Kansas, of all places. But in one measure, maybe he is: how his teams perform after a timeout.

Share All sharing options for: Is Turner Gill a better coach than Nick Saban? After a timeout, he is.

Let me set a scene:

Saturday, October 11th, 2014. McLane Stadium, Waco. TCU, after blowing a 21-point lead they held a mere 10 minutes earlier, is tied with Baylor 58-58. There is 1:17 left in regulation and TCU has the ball at midfield, facing a fourth-and-9. TCU head coach Gary Patterson elects to punt, but a substitution infraction gives the Frogs five yards and yields a fourth-and-4 at Baylor’s 45.

What to do now? With the strength of Baylor's offense, a game-theory analysis of this decision likely says go for it but maybe isn't conclusive one way or another. Patterson takes a timeout to mull it over with his coaching staff and players. Somewhere in the course of that timeout, they decide to eschew the punt and go for the first down… with a fade pass broken up by Baylor. The Bears get possession near midfield with 75 seconds left and, naturally, go on to kick a game-winning 28-yard field goal as time expires.

The ability to stop the clock is the most valuable aspect of a timeout, but the scene above highlights another value—the ability to hit pause, strategize, and come up with the right play for the situation. It's like a mini coach battle within the game. Art Briles got the best of Patterson in that particular battle.

No matter the reason for calling a timeout—stopping the clock, expiring play clock, too many men on the field, or because you put "Anchor Down" on the nameplates of your uniforms—a coach has to find the right play for the current down, distance, and stage of the game. These mini battles happen multiple times in every game, often with much less at stake than playoff implications. (Aside: isn't it great we can use "playoff implications" with NCAA Football nowadays!?) When considering performance after a timeout, we're led to wonder whether some coaches are better at coming up with successful plays.

I thought of an approach to measure a coach's ability to draw up the right play during a timeout by boiling it down to a single, mostly quantifiable, question: How much does a team’s performance increase or decrease after a timeout compared to their usual performance?

In college football, the offense mostly has the advantage after a timeout. The offense is slightly less successful after a timeout (39.5% vs 42.1%), but they're much more explosive (0.538 PpP vs 0.345 PpP). I summed all Success Rate and PpP values and then adjusted each coach's O and D ATO values using the NCAA average. Below is a plot of the results with a coach's Offensive Proficiency on the y-axis and Defense Proficiency on the x-axis. The result values are equal to a coach's ATO performance vs their usual performance with respect to the NCAA average performance after a timeout.

For example, the NCAA Average O Success Rate + O PpP VS the same values for After Timeout is:

And Jimbo Fisher's average stats vs ATO stats is:

The charts below only show coaches with at least 4 seasons coached between 2006-2014. 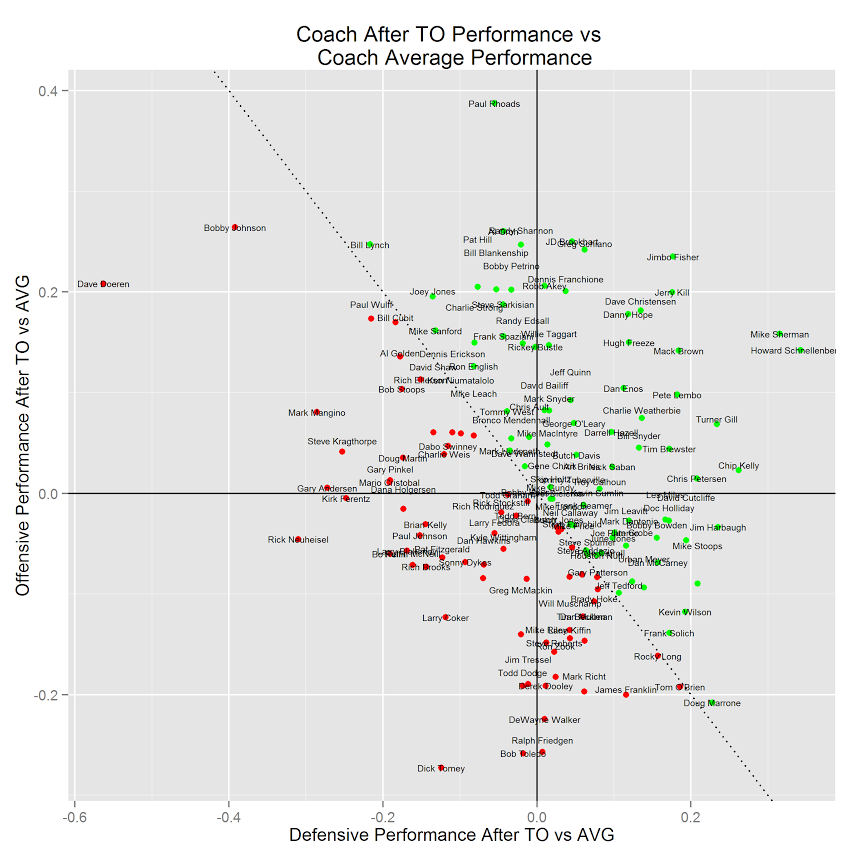 Let’s zoom in. Here are coaches better than average on both O and D plays after a timeout: 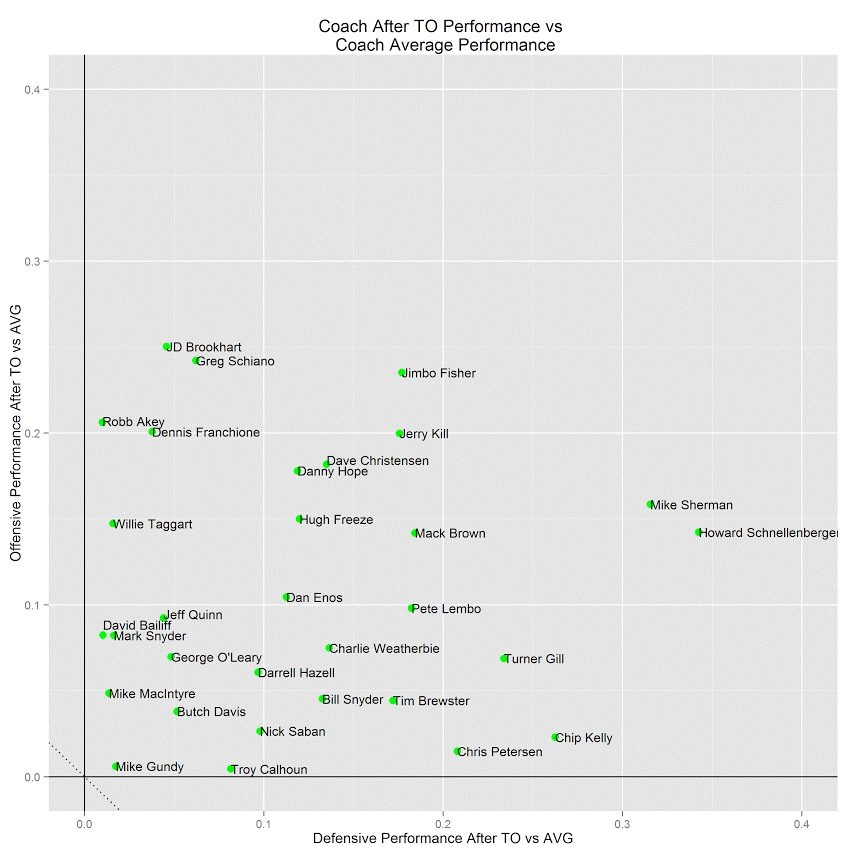 Coaches worse than average on both O and D plays after a timeout: 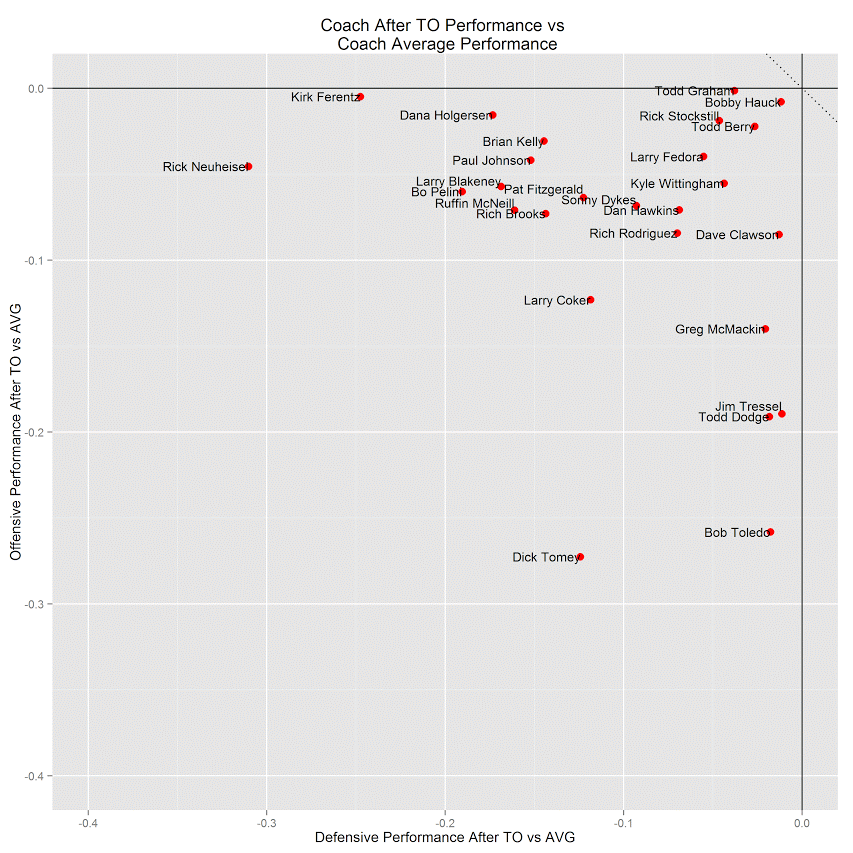 Coaches better on O and worse on D plays after a timeout: 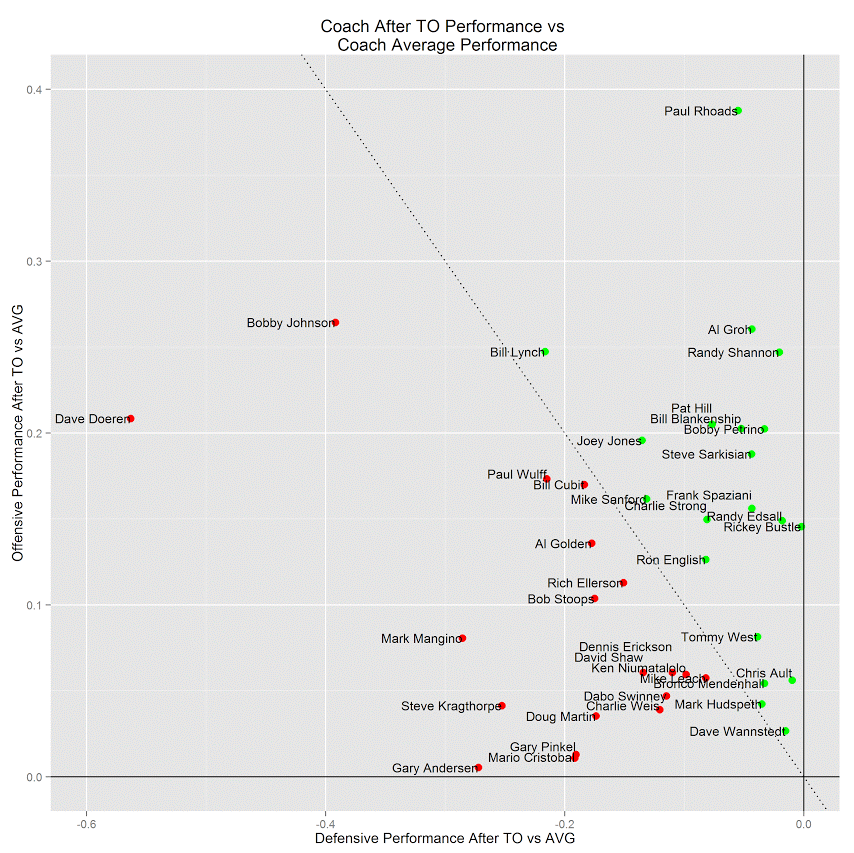 Coaches worse on O and better on D plays after a timeout: 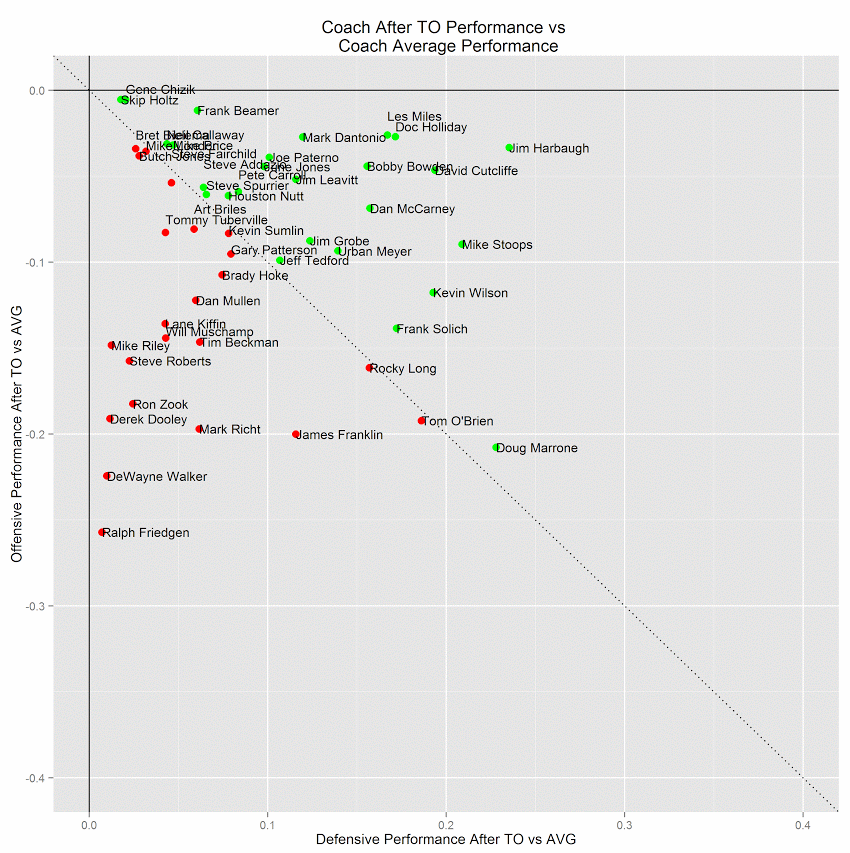 So, there you have it. By one measure, Turner Gill is a better coach than Nick Saban. Is the measure simple, maybe flawed, and likely not considering more specific game situations, such as down/distance, which team called the timeout, etc.? Yes. But still, if Turner Gill is looking for another D1 job, maybe he could boost his résumé with this info.