Remember EA Sports NCAA Football? Of course you do. If you wanted to run the option (who doesn't?) in a video game, you had to own it - that Saturday stuff's not happening in Madden. I remember having Bill Walsh's game on SEGA as a kid; then the evolution to being able to play an entire season, then to a Dynasty Mode, and inevitably, to being in my 20s and chucking controllers across the room and screaming into headsets over a group dynasty with college buddies.

When starting a Dynasty, I always tried to build up a lowly program. The main goal those first few seasons was to just build up those program reputation stars. I recently thought, with the 10 years of data available to us, we can we can measure a real-life program's strength or reputation ourselves!

So that’s what I did. Below are program rankings according to a 'Program Strength' metric similar to S&P+ (success rate + PpP) over the last 10 years. Starting with opponent adjusted season Success Rates and PpP values, I normalized the values and then summed up a team's season statistics for Off. S&P+, Def. S&P+, and Brian Fremeau's Special Teams efficiency. I weighted the values in the summation so that Special Teams represented 14% of the final value (14% of all plays are punt, kickoff, or field goals). So I took that calculated sum of 'Program Strength' for every season 2005-14 and averaged them over all seasons. Thus, most everything shown below is opponent adjusted and normalized so that 0 is average and the standard deviation is 1 and is a representation of a team's strength based on Success Rate, PpP, and Special Teams Efficiency.

Here is the chart showing average Program Strength over the last 10 years. It's clear Florida's Urban Meyer years balance out the Will Muschamp years. (Click on charts to enlarge.) 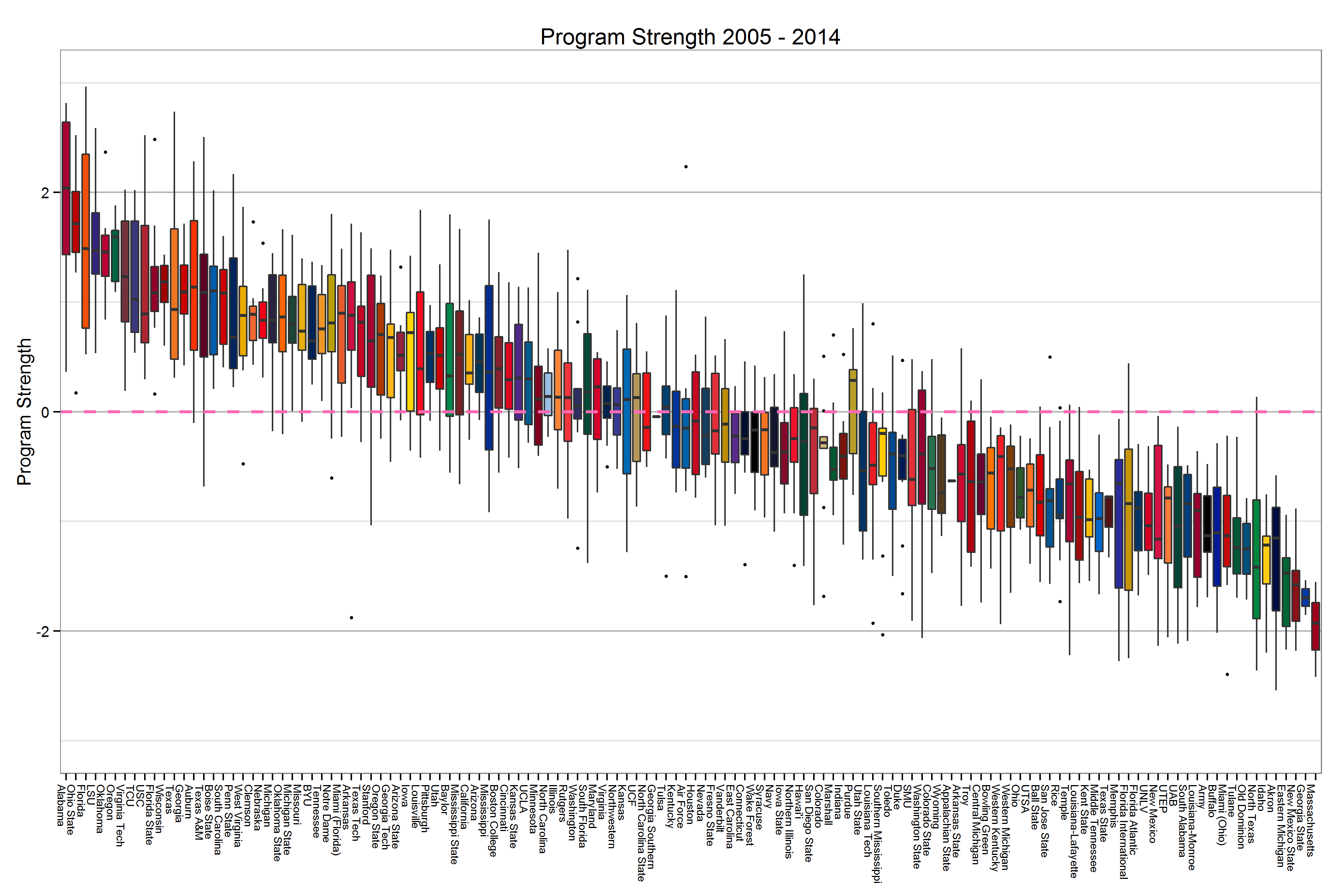 And Here are the top 25 in table form:

I also thought it'd be interesting to check out a couple other program attributes. Like O and D points per game, pace of play, and percentage of pass plays. Those charts are below. 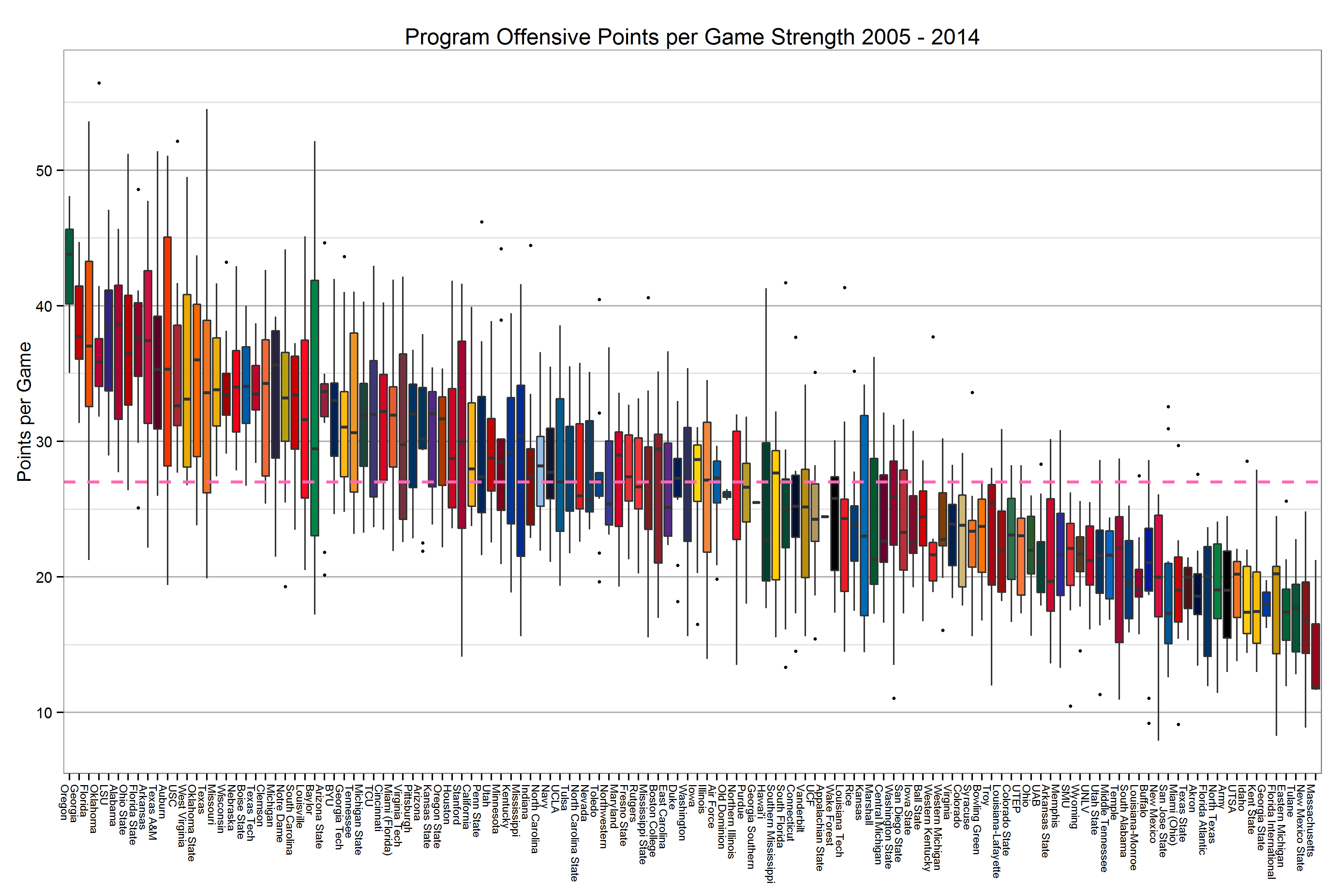 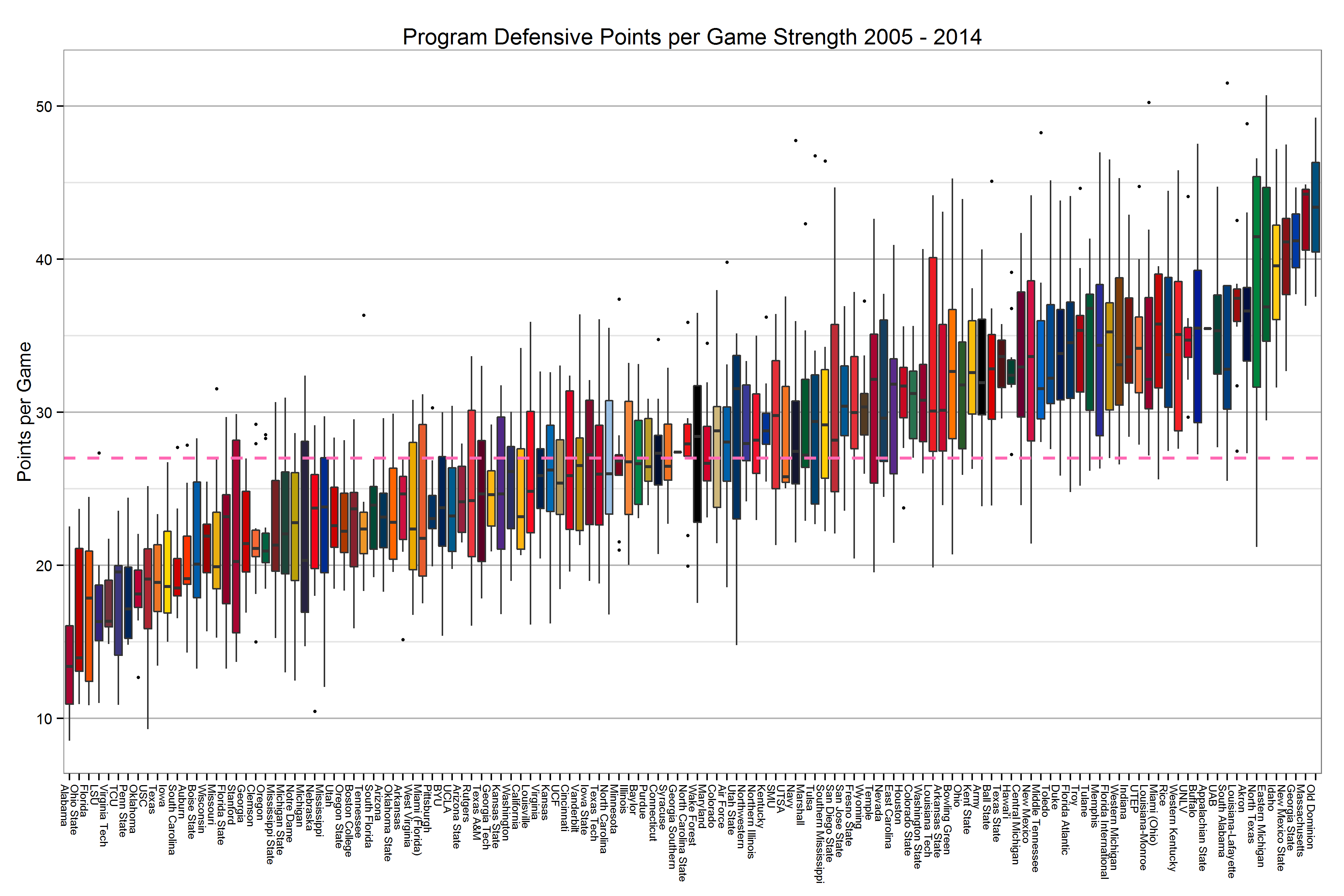 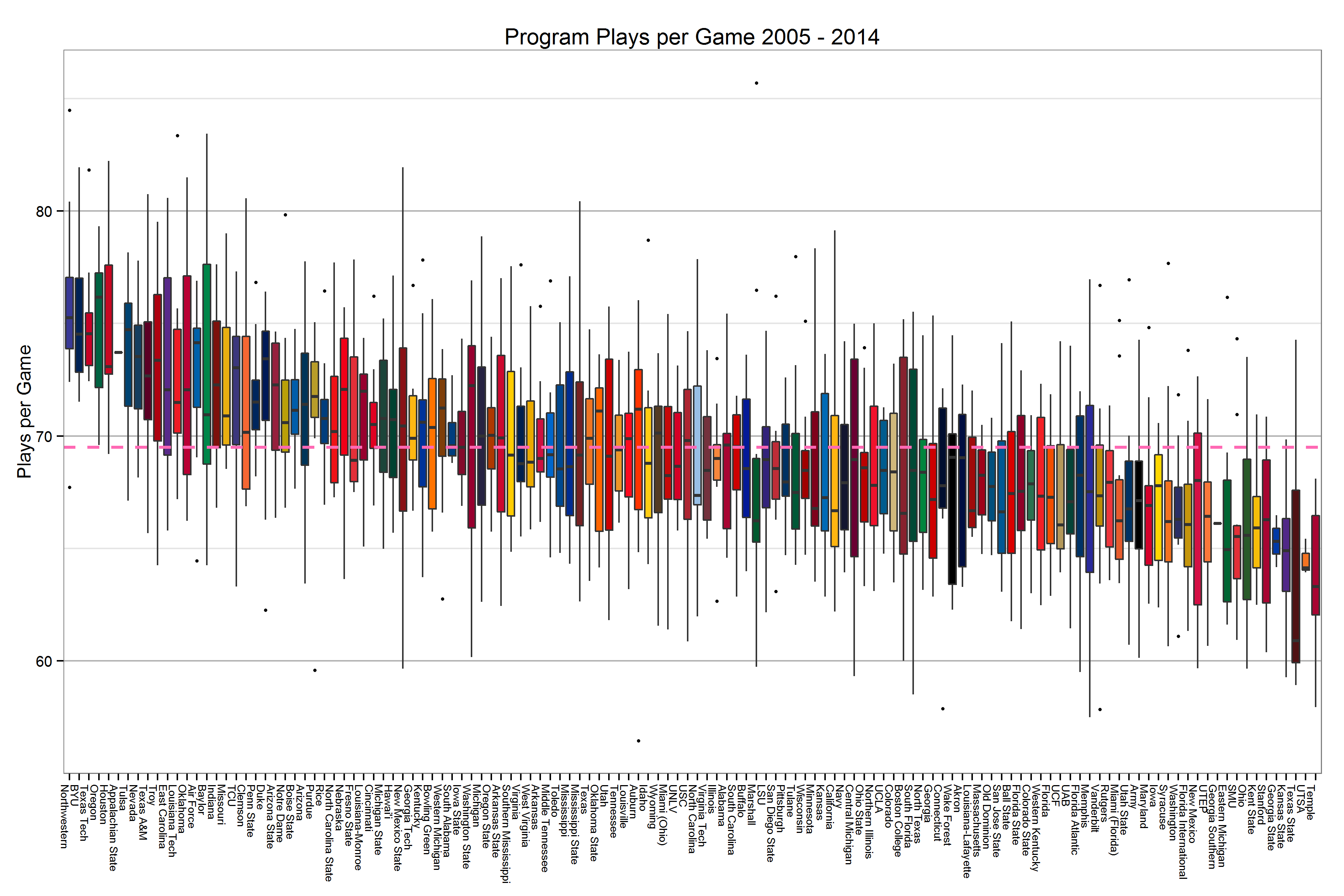 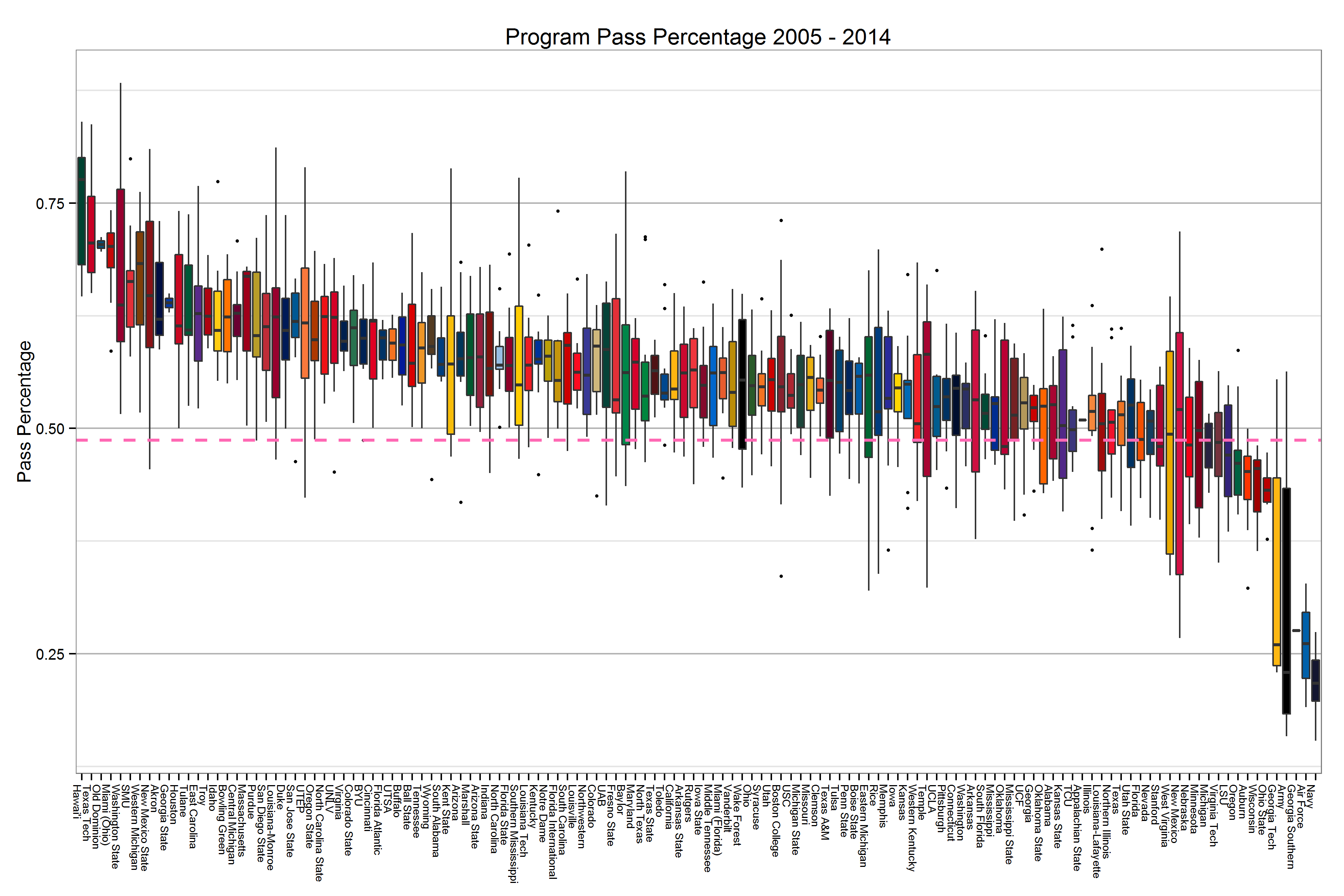 That distribution is kind of crazy there on Program Pass Percentage. The handful of teams that use a run-heavy offense really hold down the average pass play percentage.

What are some other cool things we can pull from this? Who has the best special teams units? Is Frank Beamer really deserving of all the praise his VA Tech teams get for special teams? Well, he's pretty good. Here are the top 10 Special Teams Programs from the last 10 years:

So, who had the best season? The top 25 Seasons are below. Spoiler alert: it's a whole lotta 'Bama.

I also ran the numbers for raw stats. With this info, we can calculate a schedule strength over the last 10 years by comparing the opponent adjusted values to the raw values. Teams with the highest positive delta between the respective values will have played a more difficult schedule over the last 10 years. For everyone who likes to bash schedules - Ohio State is 61st and Alabama is 42nd. 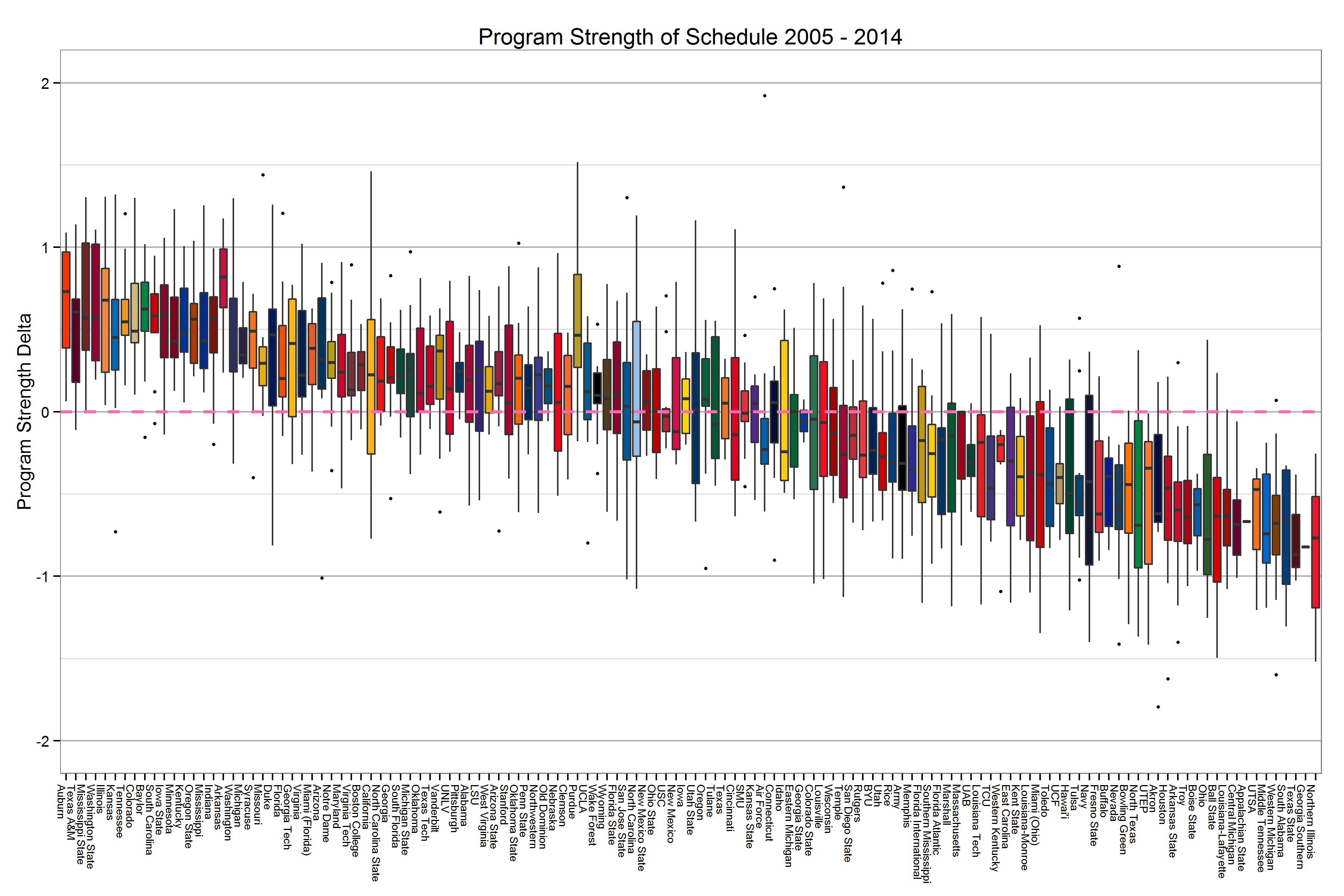 So there's the real-life program rankings for the last 10 years. The now-defunct video game is still near and dear to my heart. I'll always remember building Akron up to a power, joining the Big 10, and winning a national championship. I'm even convinced the game might have had an influence in where I went to grad school: when I really spent way too much time playing NCAA Football in high school, I always played with Kansas State - Ell Roberson and Darren Sproles were so money on the option.

Oh how I miss it - thanks a lot Ed O'Bannon! (But seriously, I'm of the belief that the NCAA is generally a traveshamockery). But there's new hope! Hopefully we can all play the beloved game again in 2016.