It was great and funny and silly when the term "Clemsoning" was introduced to the college football world by Ty and Dan of the Solid Verbal. It was a tongue-in-cheek way to say, "Hey look Clemson went 8-0 to start a year, hyped up all their fans, then lost at Georgia Tech". Now it's everywhere. It's getting run on SportsCenter and College Game Day, 60-year old columnists are slipping it into their columns (after looking it up on Urban Dictionary, no doubt), and hell, even Dabo is ranting about it in postgame remarks and then following up with FACTS on how his Clemson teams don't, well, Clemson.

At this point, the term is widely misused. The definition is too loose, so let's try to quantitatively define Clemsoning.

Let's start with the origins of the term. I think it all started in 2011. Clemson went 8-0, beating three ranked teams, some middling ACC teams, and two cupcakes. They were rolling and ranked No. 5 heading to Atlanta for a game against the unranked Ramblin' Wreck of Georgia Tech. Then the Tigers promptly threw up on their shoes, turning the ball over four times and letting Tech rush for 383 yards. They went on to lose two of their last four but still made it into the Orange Bowl ... where West Virginia hung 70 on them in a behind-the-woodshed game.

In 2012, Clemson fans had high expectations with their own version of the triplets in Tajh Boyd, Sammy Watkins, and Andre Ellington (DeAndre Hopkins was also on that team). They were ranked No. 10 and undefeated before heading to Tallahassee in week 5 to face No. 4 Florida State. Losing on the road to No. 4 FSU is not a terrible thing, although the fashion in which they lost was maybe Clemsoning-esque.

The Tiger D gave up 35 points in the second half and almost 700 yards for the game. By the time their end-of-year showdown with South Carolina rolled around, the Tigers had worked their way back to a No. 11 ranking. Then, they lost. Again, this was not a terrible loss, but another missed opportunity to seize the moment and get to a New Year's six bowl.

2013 - new year, similar story. Clemson still couldn't get over the FSU and South Carolina humps. Undefeated and ranked third, their highest rank in last 10 years, the Tigers had a home game against the No. 5 Seminoles and got spanked, 51-14. Then, with a slim outside shot at the BCS title game, the No. 6 Tigers went to No. 10 South Carolina and lost by two touchdowns.

Even by Ty and Dan's own definition, those SC and FSU games weren't quite Celmsonings -- they were going up against very stiff competition. But they certainly fit into the growing narrative.

My approach for quantifying a Clemsoning is to start with an obvious and simple definition -- a top 10 team losing to an unranked team. I'm using the AP polls here -- most coaches likely don't personally fill out their ballot, and even the ones that do don't really have time to sit around all Saturday watching games.

A team in the AP top 10 has lost to an unranked team 54 times from 2005-14. So about five times a year. Using that definition, here are the teams with the most Clemsonings: 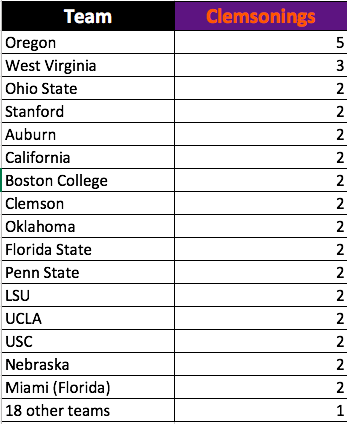 Looking at the Vegas lines for those 54 games shows that for some of them, experts expected a close game -- 13 of the games had lines of less than a touchdown. Let's throw out those games; if a game is expected to be close then losing that game probably shouldn't be a Clemsoning. Here's what we're left with: 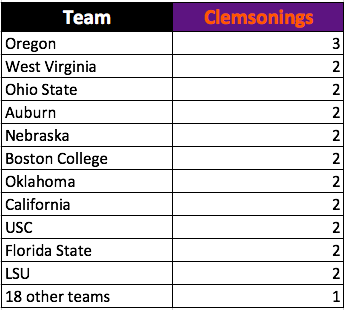 But now Clemson doesn't even show up!  They’re one of the 18 teams with one such game. Well that can't be right. Let's go back and remember that 51-14 beat down in Tallahassee in 2013. Is this a Clemsoning? I say yes. That game between top-10 teams was expected to be close, and any result within a touchdown or two would have been a reasonable outcome for either team. But getting your doors blown off? No, not acceptable. So let’s add back in any games where a top-10 team lost by more than 21 points. There are 18 of those games. Now let's check the leaderboard: 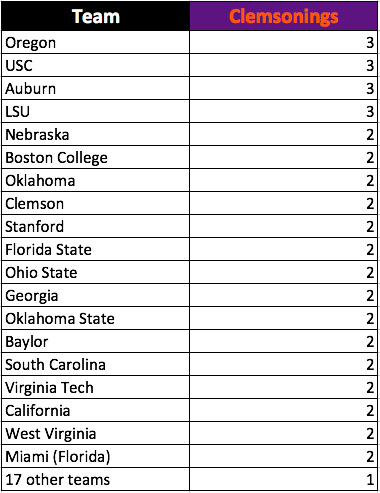 Now we're left with 59 Clemsonings over 10 years. That is about 6 per year, which seems a little high, but I think the definition of a top-10 team losing to an unranked or a top-10 team getting blown out is a pretty good definition.

So, take solace Tiger fans. The term may have started with you, but your teams certainly haven't Clemsoned the most. Below are all 59 Clemsonings using my definition - chime in in the comments or @RadDad17 with games you think I'm missing or incorrectly including.