Tyreek Hill and the unanswerable question

What happens if the RB is a good receiver out of the backfield? Checkmate.

Share All sharing options for: Tyreek Hill and the unanswerable question

When x's and o's are drawn up on the chalkboard, one of the very last things that a defensive coordinator looks to account for is how to cover the running back on a passing play.

It's just difficult to do a good deal of damage running routes out of the backfield. Any route the RB runs downfield will require time before he's even reached the line of scrimmage, much less worked his way into a passing route that would threaten the defense.

The running back, while often one of the very best athletes on the field, is also not necessarily a receiver by nature. He may or may not have great hands or be a great route runner. Of course, whatever his skills are as a receiver, offenses will still often ask him to stay in the backfield and help the offense keep the QB upright so he can throw it to someone else.

For those reasons, defensive coordinators don't typically stay up late at night figuring out how to stop the opponent's running back in the passing game. However, every once in a while a player will come along that challenges all these assumptions and unleashes hell on the DC's chalkboard.

Marshall Faulk was such a player. In 1999 as a part of the "greatest show on turf" Faulk uncorked a season in which he had 2429 yards from the line of scrimmage. Perhaps most interestingly, 1381 of those yards came on the ground, but another 1048 came through the air as a receiver.

It was all too easy for Kurt Warner to find Faulk matched up in space against a linebacker, flip him the ball, and allow him to do his thing in the open field.

In the college football world, the 2008 Texas Longhorns experienced something similar with their team after settling on an identity as a four-receiver spread team with Colt McCoy at the helm. A few games into the season, Texas settled on former WR Chris Ogbonnaya as the starting RB, which meant that Texas had five capable receivers on the field at all times.

Ogbonnaya caught 46 balls for 540 yards that year benefitting from being the last receiver that opponents worried about covering while Colt danced in the backfield and sprayed the field with quick tosses to every eligible player wearing burnt orange. While he hasn't exactly been Darren Sproles, Ogbonnaya's versatility allowed him to stay in the NFL for five seasons despite never making waves as a college player.

The 2014 football season has brought us another player to demonstrate the great threat of the receiving running back, Oklahoma State's Tyreek Hill.

After a strong JUCO career, the track star enrolled at Oklahoma St for the 2014 football season and made a debut in the season opener against Florida St that turned some heads.

The RB who can do damage in the passing game is an emerging trend in the game that very well may dominate the future. How exactly does he do so?

The last receiver accounted for

The last receiver that a defense accounts for in man coverage is the running back. Additionally, the route that a zone or pattern matching scheme dares the offense to beat them with is typically the one run by the back.

Here's an example of Tyreek Hill running an underneath route against Florida St:

The first priority for the underneath defenders, long drilled into their heads by defensive coaches, is to protect the deep defenders from vertical routes by bumping receivers, then getting depth on their drops to shrink passing windows, before finally rallying to break up or make the tackle against the short routes.

What if the short route is thrown to the fastest player on the football field and he's a demon in space?

Running backs often run simple flat routes as a part of normal concepts and defenses will play off on them in an effort to better defend the routes in the pattern that are more difficult to cover. For instance, a well run post or slant route is a challenging one for a corner to cover unless he has help inside from his linebacker. The defense will often take their chances against the quick flat route to the back in order to offer inside help on a slant or post and prevent a receiver from catching the ball while streaking up field at full speed.

Of course, if that's Tyreek Hill running into the flat the defense would be wise to keep their eyes on him and limit his options in the open field as quickly. Otherwise they risk scenarios in which they have to change directions after he catches it, and then catch and tackle him in space. But then, when a defense starts thinking about stopping the short flat route, the deeper routes open up:

Obviously an inside linebacker is typically not going to be able to run with a player like Tyreek Hill in and out of his breaks.

Simply put, defensive coverages aren't designed to pay extra attention to defending underneath throws to the running back.

Then there's also the deeper running back routes like the wheel or the seam route, which are a nightmare if the offense can buy time for them to get open. No one wants to to try and catch Tyreek Hill accelerating into a wheel route that looked like a standard flat concept: 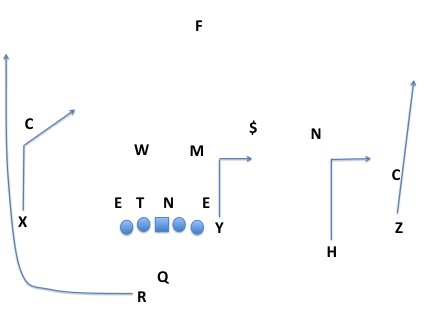 Perhaps the defense has the athletes to play man coverage and lock down every route with a safety over the top...except their weakside linebacker suddenly finds himself having to flip his hips and run with Tyreek Hill down the sideline and the safety is looking to help the corner defend the receiver and can't get arrive in time to help the hapless linebacker...

The threat of the check down

The check down is an art that many good college QBs don't develop quickly. If you're a star QB with a cannon arm and fantastic accuracy, it's simply a lot more fun to try and thread the needle downfield rather than to toss it short to the check down option.

There's no glory for the QB in the check down throw and don't kid yourself, QBs love glory.

Aaron Murray was a rare exception and Todd Gurley had 441 receiving yards in 2013 as a result. Some check downs are simply underneath patterns run into the flats or short field like those mentioned above that defenses aren't normally very concerned with stopping.

Another area where a shifty running back with good hands can be lethal is releasing into a route after checking to make sure there's no blitz. They make sure the linebackers aren't coming to outnumber the protection, and then quietly slip into a wide open space and turn their shoulders to the QB.

Releasing a player like Tyreek Hill into the short middle or flats after the receivers have already run their routes is a very easy way to get them the ball in space. Most of the pass defenders are getting deep into their drops with perhaps only a lumbering middle linebacker left behind to try and run with the back and he may or may not be paying close attention.

Finally there's the "jailbreak screen" to the running back. This play works by having the receivers run vertical routes and the OL feign vertical pass blocks before slipping downfield to seek and destroy defenders in space while the RB runs behind them.

There may be no play more devastating to a blitz then a well executed jailbreak screen to a blazing fast RB.

Running backs who are dangerous running routes out of the backfield have always been a boon to a good passing game, particularly in "Air Coryell" type offenses that regularly send wide receivers deep and create space underneath for the RB to settle in.

However, traditional offenses will always choose their running backs primarily based on who can run the ball most effectively.

The ceiling for the "dual threat" RB comes when he is paired with a dual threat quarterback in an offense driven by packaged-plays. Here are some examples of new play designs that combine the challenge of covering a quick RB on a passing route with the need to defend an inside run.

First is to combine quick game concepts that involve the running back motioning out of the backfield with QB runs like draw. Perhaps a lead draw combined with a quick game staple like y-stick or scat: 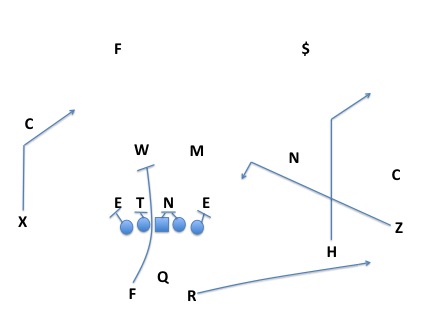 You can run these plays with or without a lead blocker in the backfield and with any variety of run game concept that the QB is effective at running. The problem for the defense is that they are often designed to respond to the RB vacating the backfield by removing an inside linebacker from the box, leaving them under manned against the QB run.

Here's another example, a running back screen to the flat combined with a QB power run: 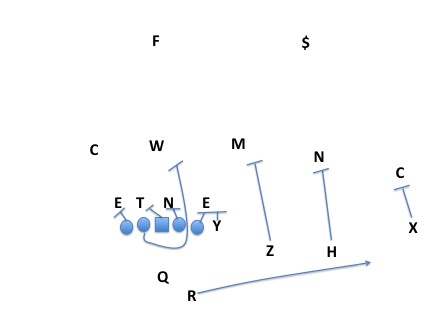 Defenses typically like to sit in a two-high safety shell against a team that runs the quarterback because it's very easy for teams with a dual-threat QB to attack the edges of a defense that is playing a cover 3 or cover 1 defense and asking pass defenders to force the edge.

However, teams with a hybrid RB now have plays such as these that involve the RB as a receiver and maintain the threat of an inside run with the quarterback, thus presenting serious horizontal stress to two-high safety defenses.

Due to the development of skills in players from a young age all the way through their professional careers, European football (soccer) is defined by ball-control tactics that allow teams to maintain possession and carefully and skillfully pick apart their opponents over the course of a game.

Seven on seven drills, rule changes, and tactical advancements are having a similar effect on American football. Much like the Dutch style of "total football" in which defenders are expected to be able to play as forwards and forwards to play as defenders, spread-option football takes versatile "hybrid" players with varied skill sets and creates situations in which defenses can't feature specialized players or else risk devastating mismatches.

What happens when the running back is a player like Tyreek Hill who requires that his counterparts, the linebackers, be as proficient at covering routes in space as they are at filling interior gaps? The defense has no easy answers.

But it's a question that is going to be continually asked until someone finds solutions.