The rise of the defensive quarterback

The demands of a modern defense now include having leaders on the defense who can be an extension of the defensive coordinator's mind.

Share All sharing options for: The rise of the defensive quarterback

When defenses face off against HUNH (hurry-up, no-huddle) offenses, some of the most important action occurs before the ball is even snapped in moments that look like this:

Before the snap there is some offensive motion and a great deal of communication on the part of the Michigan State defense, led by senior strong safety Isaiah Lewis and senior mike linebacker Max Bullough.

While a hurry-up offense can use signs from the sideline to indicate formations and plays quickly, the speed with which those teams can then line up precludes the defense from matching many of those calls with their own. Many defenses are now utilizing new standards and tactics for how to match these practices.

Essentially, defenses need their own quarterbacks, players who can be an extension of the defensive coordinator's mind, making calls on the field and ensuring the defense is lined up properly to make stops. This means there's a higher premium on experienced and cerebral players who understand the game and understand the plan.

Without these defensive quarterbacks, defenses can end up like lost puppies, or "sheep without a shepherd." Blindingly helpless and completely unable to care for themselves, wandering over cliffs or into the waiting jaws of the wolf. 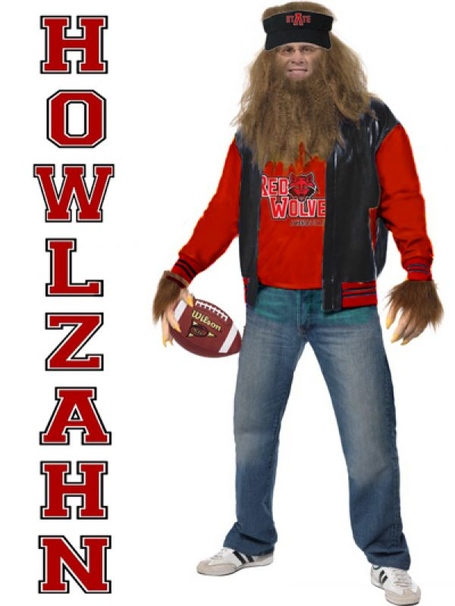 This is where Bill Connelly's observation about how defenses suffer when they don't have returning starters comes home. An offense can adjust to lack of experience by taking their time or getting more direction from the sideline. A young defense has to be able to line up quickly and know what's up with or without the assistance of their coordinator.

In order to get defensive players at that level, here's the process.

For many teams, the strategy on standard downs against HUNH teams is simply to get lined up in sound schemes that give them a chance to play good fundamentals and either make plays or wait for mistakes.

Teams like Michigan State and Baylor often play very simple quarters schemes on 1st and 2nd down and just dare opponents to beat them.

In order to have a base package with answers and alignment shifts for every opponent that can be executed at a high level, you need experience and ideally you need players who can make all those calls without help from the DC.

For Sparty, Max Bullough understood Pat Narduzzi's 4-3 Over defense inside and out and could get them lined up in all of the different checks and alerts that would put them in optimal position to handle opposing attacks.

For Baylor, they now also boast a senior middle linebacker in Bryce Hager who understands DC Phil Bennet's take on the 4-3 Over on a similar plane as Bullough did.

While these teams play their base defense on an overwhelming majority of their snaps, they still have a great deal of variety within the base package. They can adjust their positioning to offer better leverage against different tactics, change which players have which assignments, and know which of those adjustments the DC prefers against a given offensive look.

Ideally, the defense has two players who understand the base defenses and how they best defend the opponent as well as their DC does. Generally, these two players who make the calls and checks are the middle linebacker and one of the two safeties.

When these players have a high understanding of what's going on, and the defense can always adjust to how the offense lines up simply by communicating amongst themselves on the field, the HUNH teams lose a major advantage. No more free yards gifted by bad alignments or assignment busts.

The calls on the field

The types of calls that a defensive captain makes are usually divided into the front call and the coverage call.

While not everyone divides up their defense to the extent that TCU does, teams will still typically have the safeties make the coverage call based on the offensive set and communicate it to the linebackers and other DBs.

How this works depends on the coverages and preferences of the defense. If it's Baylor or Michigan St the coverage call will almost always be quarters and it's simply a matter of communicating the specific brand of quarters that will be played, or ensuring that everyone in coverage remembers the plan that was communicated to them by the coaches in the meeting room.

Other teams may change from one base coverage to another depending on opponent's formation. For instance, many teams might play a brand of quarters coverage against a 2x2 set (two receivers to either side) but prefer to play cover 3 against a 3x1 set (three receivers to one side, only one to the other). What's to be done?

If that's the plan, one of the safeties needs to check the defense into the cover 3 call and make sure everyone adjusts and gets into position.

Then there are the disguises. The best defenses know how to communicate with each other on the actual call while working in concert to disguise the look. If you just have DBs and LBs milling around aimlessly before the snap and then trying to dart into position after the snap you are begging for trouble against the HUNH teams when you don't get to your spot in time. If you have one or two players trying to disguise the look it can still be thwarted if the QB knows he can look at other defenders who will give it away.

The best ways are to either to have the players line up and drift back and forth in concert in ways that simulate two different looks OR always lining up in one call and then "stemming" just before or just after the snap into the actual call.

Let's say a team wants to disguise whether they are responding to a trips set (three receivers to one side) with the "special" quarters adjustment or with cover 3: 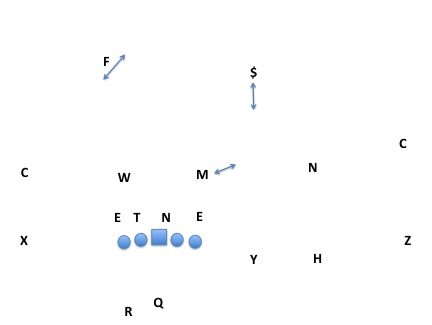 If all the disguising is done in concert the offense doesn't know which coverage it will be and can't make a play call to target either coverage.

Defenses that prefer to stem to different looks would typically start in a two-deep alignment, perhaps "Solo" before moving after the snap into the new call, in this case we'll also use cover 3. 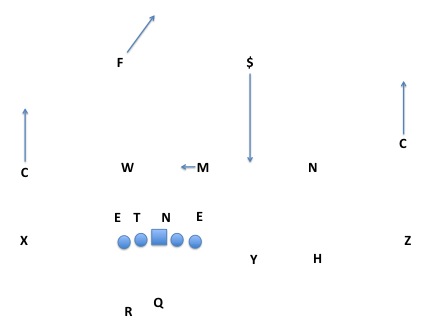 After the snap the safety drops down, the corners and free safety drop deep, and the middle linebacker moves back into the box.

Disguises of either sort are typically taught in practice but without experience and leadership on the field these tactics are very difficult to execute.

Then there's the job of the other captain, often the middle linebacker, who's in charge of the front. For a team that uses multiple fronts, he might instruct the defensive linemen and other linebackers and make sure they know which front to play against a given look by the offense.

For a team like Michigan State that plays mostly Over fronts, he might tell them which specific techniques they should use to stop the runs or attack the protections that they expect to face or have already been seeing.

A team like TCU that uses a lot of stunts and twists in their base fronts will need to communicate those to the other players with quickness in order to be ready in time before the ball is snapped.

The best case scenario, in any instance, is to have a leader who's studied enough film with the coaches to be able to make audibles and calls on his own when things get going really fast or the team is on the run. If the coaches can give their players the autonomy to adjust from one front, stunt, coverage, check, etc to another based on what they are seeing on the field rather than what they were pre programmed to do? Now you have the makings of a devastating defense.

The captains of a defense progress on the following scale:

They know how to get the defense lined up in a sound front and coverage against most or all of an opponent's formations and looks.

The captains and team know how to hide from the offense which of their defensive calls they are going to be using on that play.

The defenders have "auto-blitzes" that they've been instructed to call and use in specific instances. One common auto blitz that some teams will use is to blitz both inside linebackers and play "cover 0" with no deep safeties every time the opponent gets in a five-receiver, "empty" set.

They know how to make adjustments when things aren't going well based on an understanding of all the options that a defensive playbook affords them to counter specific tactics or strengths from opponents. They can get from one base look to another that will allow them to be more sound.

The captains have such a mastery of their own plays and the opponent that the DC gives them freedom to call blitzes or stunts when they personally see opportunities to attack their opponent.

If a particular safety or linebacker has a great enough command of the field and his teammates to be at level four you wouldn't necessarily know it from the stands or from your living room. The opponents might not even know it.

Nevertheless, a player who can do this can make a defense exceptionally potent, especially against HUNH teams. The big advantage of tempo is forcing simplicity from the defense. If the defenders understand the game of football well enough that they can maintain complexity without a coach holding their hand then the advantage swings WAY back in favor of the defense.

After all, most HUNH teams are incredibly simple themselves.

This is the next step for many defensive oriented teams that aren't content to turtle up and hope to withstand HUNH teams. As Coach Shoop says, "I have two sayings in my office, 'have no conscience' and 'respond to every problem with aggression."

Maintaining the aggression that defines many defensive strategies will involve targeting recruits that understand that philosophy and the tactics for bringing it out. You can't necessarily see those traits on a high school highlight film, or on the tape from Saturdays, but cerebral players could be the defensive answer to the conundrums posed by offenses today.