In my previous two posts I looked at how sack rates affect a team's point differential, and wether or not the down and distance of a play impacts the cumulative sack rate for that team. In this post I want to look at wether or not a season's worth of passing statistics can help us determine the sack rate for a team.

As always I need to give a huge thanks to www.cfbstats.com for providing play by play information on college football for the past 9 seasons. I grabbed all passing plays (including sacks which the NCAA counts as running plays) from the 2005 to 2012 seasons. I then filtered all plays to only include games between FBS opponents and excluded all garbage time plays from the analysis. From there I found season totals for Attempts, Completions, Touchdowns, Interceptions, Passing Yards, Sacks, and Sack Yards for each team from 2005-2012. This left me with 952 team-seasons of passing statistics to delve into.

My initial hypothesis was that teams that throw the ball deeper are more likely to get sacked more, as they have to hold the ball longer and wait for the receivers to come open. But I also wanted to look at the affect of passing efficiency on a team's sack rate. I came up with the following list of passing statistics to examine:

Instead of doing an individual table for each, I used ggplot2 in R to plot all statistics on one graph using the team's sack rate as the dependent variable for that season and the independent variable as the passing statistic. In addition I included the correlation for each relationship, a linear best fit line (except for Attempts which had a quadratic relationship), and the 95% confidence intervals for the best fit line (the narrow bands on the line). 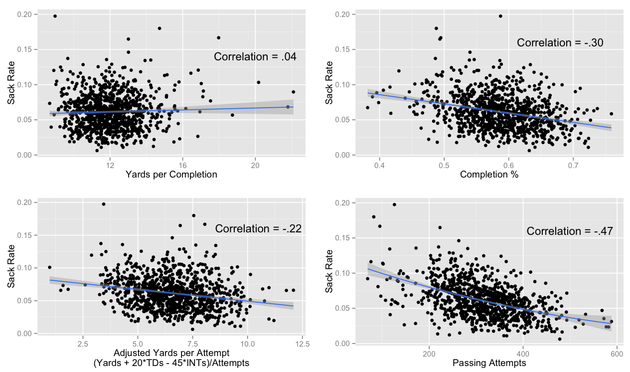 Here are my observations from this plot: 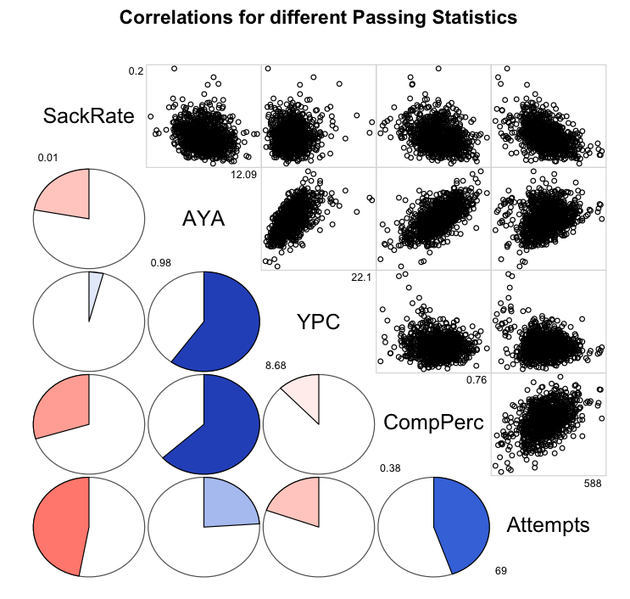 The three highest correlations among my passing statistics are between Adjusted Yards per Attempts (AYA) and Completion Percentage, AYA and Yards per Completion, and finally Completion Percentage and Attempts. So these variables are obviously correlated a fair amount with each other, there are only so many ways you can measure a team's passing game.

It seems that very few things matter when predicting a team's non-garbage, FBS only Sack Rate. The largest predictor for a team's sack rate in a season (other than the number of Sacks) is the number of times a team throws the ball. I'm not sure if this is an example of the fact that team's who can't avoid sacks won't have as many opportunities to throw (some sort of survivor bias) or the fact that teams who throw the ball more are better at avoiding sacks. In my next post instead of looking at what season passing statistics can tell us about sack rates I am going to look at what we can use in-season to try and predict a team's sack rate in their remaining games. However, if you have any ideas on things to look at for this post then please let me know in the comments.