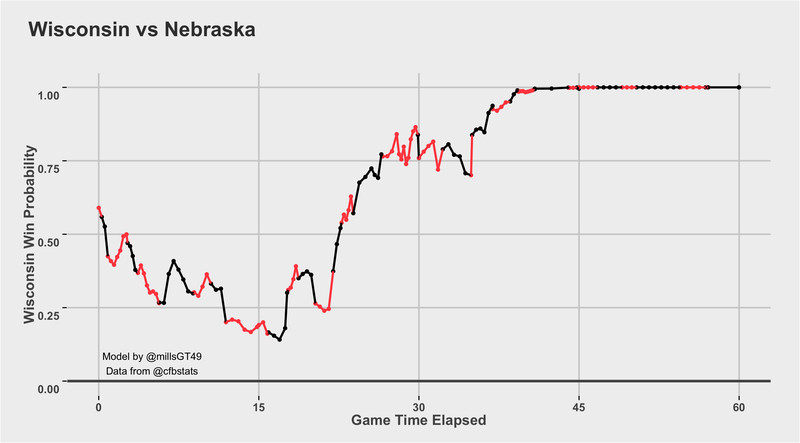 Win probability under 25% in the second quarter, near 100% midway through the third. Happens all the time. Sure.

In last week's preview, I said this about Nebraska's run defense:

The Husker defense ranks just 48th in Rushing S&P+. Nebraska has a top-notch pass defense, but that only matters so much against a Wisconsin team that really doesn't want to pass. The Badgers have run the ball 68 percent of the time on standard downs (20th in the country) and 47 percent on passing downs (ninth).

Whether the quarterback is Joel Stave or Tanner McEvoy, Wisconsin's success will be derived from how well the Badgers move on the ground.

Nebraska's season rush defense numbers aren't great, but the Huskers have had their moments. Northwestern's Justin Jackson and Illinois' Josh Ferguson combined for 189 yards on 33 carries (5.7 per carry), and Miami star Duke Johnson had 93 on 18 (5.2), but Purdue's Akeem Hunt, Rutgers' Justin Goodwin and Desmon Peoples, and Michigan State's Jeremy Langford totaled just 240 on 75 (3.2).

The more the run is a focus of your offense, it seems, the better Nebraska performs. But performing well against Melvin Gordon and Corey Clement could mean allowing six yards per carry.

Now, to their credit, the Huskers did allow only 4.4 yards per carry to Corey Clement. That may have been undone just a tad by Melvin Gordon rushing 25 times for 408 yards.

The best/worst part of this game: if Nebraska's offense had been allowed to succeed after the first quarter, and if Nebraska had been able to score enough points to keep Gordon in the game (instead of checking out after three quarters), Gordon might have reached 500 yards. Third-stringer Dare Ogunbowale, after all, carried 10 times for 62 yards. Give those carries to Gordon (and add a "He's Melvin F***ing Gordon" bump), and you get awfully close to getting into the 500-yard range.

Against a defense that held Jeremy Langford to 3.2 yards per carry.