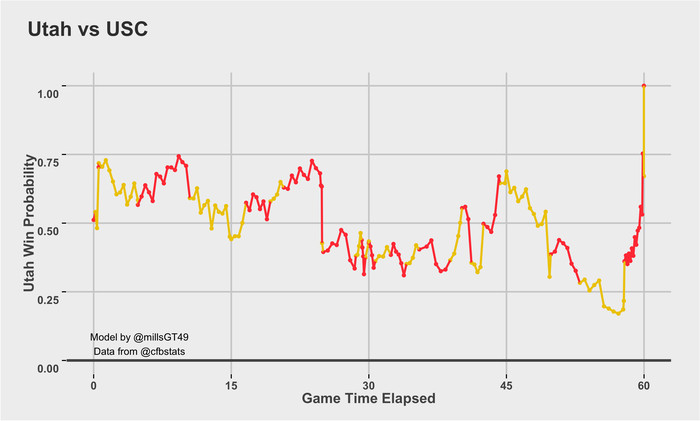 This was one of the stranger games of the week on paper. USC and Utah were almost dead in efficiency, explosiveness, and finishing drives. Plus, both teams had a return touchdown (Utah via fumble return, USC via kickoff), so that cancels out. With all of those factors even, one would assume that a 14-yard field position advantage for Utah would have resulted in an easier victory, but it did not. The Utes still needed a fourth-down stuff and a last-second touchdown to win.

Regardless, they DID win, and they're now 6-1 and 32nd in F/+. Win in Tempe this Saturday (a tall task), and they might become the South favorites with Arizona coming to SLC in a few weeks.

As for USC, the Trojans are still a healthy 23rd in F/+, but the defense has trailed off dramatically from last year. I was able to convince myself that the offense would improve a bit and the defense would still be really good after Justin Wilcox took thd coordinator baton from Clancy Pendergast. Not so much. USC's up to 13th in Off. F/+ but down to 41st in Def. F/+. The leakiness has been costly enough for the Trojans to lose three games by six or fewer points. They used up quite a bit of karma in those Stanford and Arizona wins, evidently.