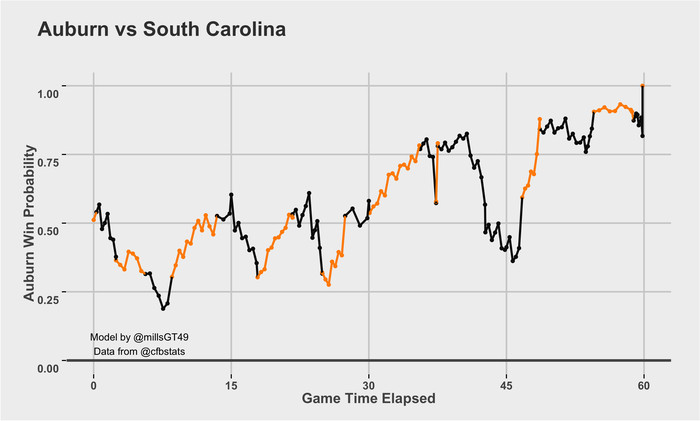 There were 17 minutes left in the game when South Carolina tied Auburn at 35-35 and recovered a surprise onside kick. The Gamecocks had scored touchdowns on their last three full possessions (not including a clock-killer at the end of the first half), and quarterback Dylan Thompson was enjoying one of his best career passing days.

The Gamecocks had three possessions to either take the lead or, later on, tie the game. But Thompson was picked off in the end zone following the onside kick. Then Thompson threw incomplete on fourth down from the Auburn 19. Then, on a Hail Mary attempt from the Auburn 41, he was picked off again as the clock expired. (Granted, there should have been one more snap from the 35.) In a game symbolic of South Carolina's season, the Gamecocks showed extreme promise but couldn't ever get the stop they needed and couldn't score when they had to. Auburn 42, South Carolina 35.

(I was thrown by South Carolina having 11 possessions to Auburn's eight, but it makes sense -- Auburn muffed a punt, South Carolina recovered an onside kick, and Auburn picked the ball off as time expired. None of those count as Auburn possessions.)